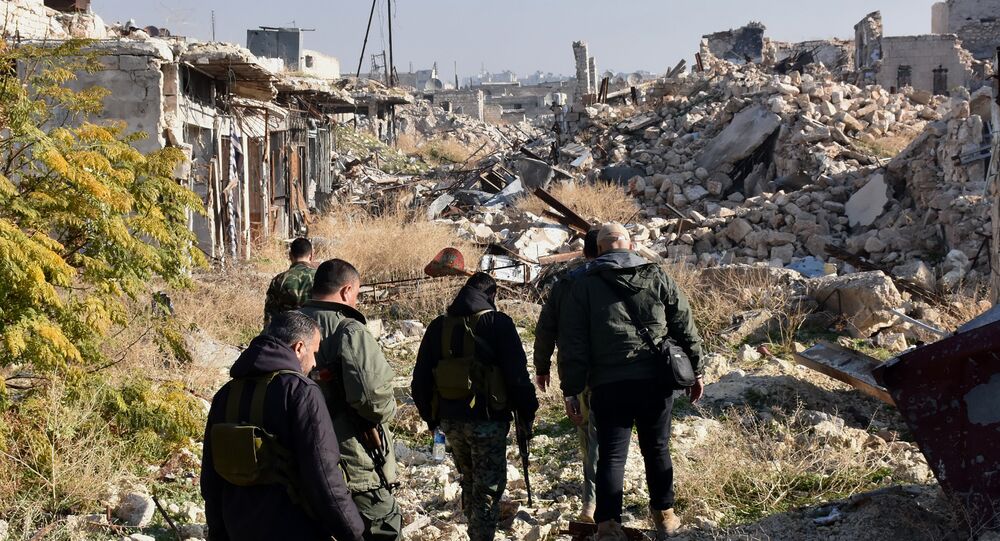 The full liberation of Aleppo will strengthen the position of the Syrian Arab Army (SAA) and lift the spirit of the Syrians who struggle for the sovereignty and territorial integrity of the Arab Republic, a French political scientist believes. Meanwhile, Russia's consistent strategy in Syria received praise from many of the regional players.

The Russian-backed Syrian Arab Army (SAA) continues to gain ground in Aleppo; according to the Russian Ministry of Defense, the SAA now controls 93 percent of the territory of the city.

Speaking to Sputnik, Russian military expert Igor Korotchenko, chief editor of National Defense magazine, suggested that the city will be fully liberated in the next few weeks.

"I think that in the next few days, maybe few weeks, the government troops will take full control of Aleppo. It will put an end to the suffering of civilians who were under the control of the terrorists," Korotchenko stressed.

© AFP 2021 / George Ourfalian
Losing Aleppo: Western Countries Panicking Over Their Lack of a Plan B in Syria
Meanwhile the Western countries continue to beat the war drums about the Russo-Syrian counter-terrorism operation, threatening to impose sanctions on those who support the Syrian President Bashar al-Assad.

In her interview with Le Figaro, Caroline Galacteros, political scientist at the Institute of Advanced Studies of National Defense, underscored that Western countries urgently need "political and strategic realism."

"The advance of the Syrian government forces [in eastern Aleppo] is important. The fact that [the SAA] managed to expel the jihadists from the maze of streets and underground tunnels and forced them to retreat toward the south-east of the city shows how well the SAA advance is going," Galacteros emphasized.

She stressed that the successful evacuation of tens of thousands of civilians from eastern Aleppo has deprived the jihadists of their "human shields."

"Above all, the successful evacuation of several tens of thousands of civilians towards the west of the city deprives the jihadists of their "human shields"… and [it deprives] the western opponents of [Assad] of a heavy media argument against the military involvement of Moscow [in Syrian affairs]," she highlighted.

The French expert underscored that the full liberation of Aleppo will lift the Syrians' spirit, marking a symbolic political victory of those who are struggling for the restoration of the Syrian state.

According to Galacteros, the retreat of jihadists in Aleppo demonstrates that Washington continues to lose its positions in Syria.

She called attention to the recent speech delivered by US Secretary of State Kerry at the latest meeting of NATO Foreign Ministers in Brussels on December 6.

© REUTERS / Alaa Al-Faqir
Neocons' Last Hurrah: US Talk of Arms Shipments to Syrian Rebels Comes Too Little, Too Late
It seems that Kerry has thrown in the towel, she suggested, adding that the outgoing administration seeks to get rid of responsibility for supporting Islamists in Syria.

Answering the question whether the operation to liberate Aleppo signals Russia's return to the global stage, Galacteros said that there is no doubt about it.

"In my opinion Russia's return [to the global arena] is an obvious fact," she stressed.

At the same time, Russia's consistent Syrian strategy and its efforts to protect the country's territorial integrity has a wide appeal "not only in Damascus and Tehran but also in Cairo, Algiers, Delhi, Africa, the UAE, Ankara and even, in a certain way, in Riyadh," Galacteros underscored.

"Moscow's diplomacy of open and non-exclusive dialogue with all direct and indirect actors of the Syrian conflict goes well beyond the management of just this drama," she said.

© REUTERS / Umit Bektas/File
Road to Al-Bab: 'It's in Turkey's National Interests to Team Up With Russia, Syrian Arab Army'
However, instead of embracing Russia's realistic approach to the Syrian crisis, France and other Western states continue to vilify Moscow and Damascus, downplaying the importance of popular support for the Assad government in Syria, she added.

Galacteros expressed hope that Donald Trump's win in the US and Francois Fillon's victory in the presidential primaries in France will result in the shift toward more pragmatic and realistic foreign policies which will help solve the Syrian crisis.

"I believe that our world urgently needs political and strategic realism," she highlighted.

According Vladimir Yevseyev, the deputy director of the CIS Institute, it's the last attempt of the outgoing administration to "bind Trump in some way, forcing him to pursue the Obama policy in the Middle East."

"But this does not mean that Trump will continue to act exactly the way Obama wants," Yevseyev believes.

It seems that the days of the Obama administration's political maneuvers in Syria are numbered.