'It's in Turkey's National Interests to Team Up With Russia, Syrian Arab Army' 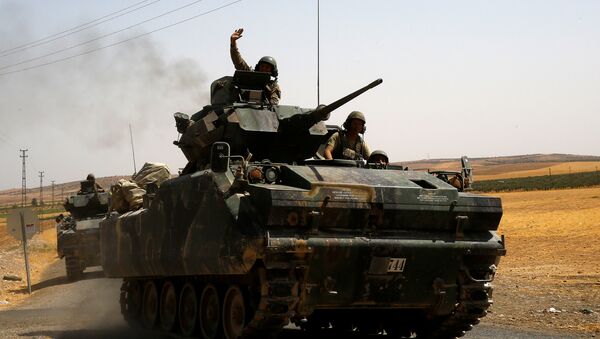 The rift over Syria continues to deepen between Ankara and Washington, retired Air Lieutenant General and President of TESUD (Turkey Retired Officers Association) Erdogan Karakus underscored in an interview with Sputnik Turkiye.

"From the very beginning the United States opposed our [Turkish] operations in Syria," Karakus told Sputnik, "The US' goal is obvious: [they] want to create a Kurdish corridor along the Turkish border, up to Hatay Province; that would allow them to exert constant pressure on Turkey."

Turkey Finds Itself Left Out in the Cold Amid US-Kurdish Raqqa Offensive
"It is obvious that the Turkish military operation to liberate al-Bab does not fit into Washington's plan," Karakus underscored, referring to the Pentagon's November statement.

On November 16, Colonel John Dorrian, Operation Inherent Resolve spokesman, stated clearly that "the coalition has not been a part of the Turkish advance toward Al-Bab."

"What I would say about that is the coalition has not been a part of the Turkish advance toward Al-Bab.  This is a national decision that they made… that's a decision that they'll make and it will be one, again, that will be the focus of ongoing political discussion," Dorrian told reporters.

"The coalition continues to work with our partners, the Syrian Democratic Forces (SDF) and there're a contingent of Syrian Arabs, to isolate Raqqa, and then we'll continue the political dialogue with Turkey and our partners and our allies on the way forward from there," the US military official stressed. 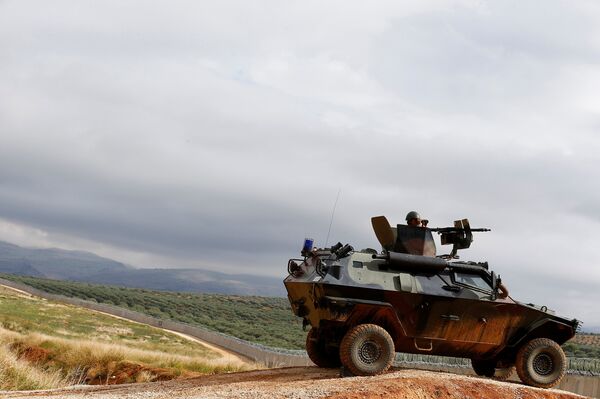 A Turkish soldier on armoured military vehicle patrols the border between Turkey and Syria, near the southeastern village of Besarslan, in Hatay province, Turkey, November 1, 2016
© REUTERS / Umit Bektas

Ankara has repeatedly protested against the US-Kurdish rapprochement.

In his November interview with Sputnik Turkish academic and retired brigadier general Haldun Solmazturk highlighted that Ankara found itself sidelined when the US-led coalition began its offensive against Raqqa.

"The Turkish government has long protested against the US-Kurdish rapprochement and their joint actions in Syria. Ankara strongly criticized their combined operation aimed at the liberation of Raqqa," Solmazturk emphasized, bemoaning the fact that US-Kurdish cooperation "has gone too far."

Turkey 'Seeking to Neutralize Kurds, Beef Up Its Own Presence in Syria'
The crux of the matter is that Ankara regards the US-backed Kurdish People's Protection Units (YPG) as a Syrian affiliate of the Kurdistan Workers' Party (PKK), outlawed in Turkey.

Given this, Ankara needs to coordinate its activities in Syria with both Russia and the Syrian government forces, Karakus believes.

"It's in Turkey's national interests to coordinate its activities in Syria with Russia and the Syrian government forces," the retired Lieutenant General said.

He emphasized that Turkey does not harbor any plans to violate Syria's sovereignty and seize the country's northern territories. What Ankara is interested in is to create conditions for three million Syrians' return to their homeland from Turkey, Karakus stressed.

"It is obvious that Turkey cannot allow the American and the Kurdish YPG to occupy Raqqa and its neighborhood," he highlighted.

Russia-Turkey Intelligence Sharing in Syria Signifies Major Changes in Relations
"I believe that Turkey is well aware of the situation in the [Syrian] Arab Republic and aware of the Western countries' intentions. It appears that now Ankara will make efforts to reduce the Western coalition's influence in Syria and Iraq," Karakus suggested.

"And this is possible only if Turkey will closely cooperate and coordinate its actions with Moscow and Damascus," the Turkish expert emphasized.

"We are not trying to build a Kurdish corridor, this is not our policy," US Special Presidential Envoy for the Global Coalition to Counter Daesh Brett McGurk told The Daily Sabah Thursday.

"Our policy is to defeat Daesh. We are not supporting the creation of a Kurdish corridor. That is not part of our agenda, that's not our policy, we make that very clear to the Syrian Kurds," McGurk asserted.

"But it's also important to keep in mind that the Kurds in Syria have also been a primary victim of Daesh. They want to fight against Daesh and we are helping them to fight Daesh," he added.

The US-led coalition is trying to ease tensions between Turkey and the Kurdish dominated SDF, which is currently carrying out an operation to isolate and liberate Raqqa from Daesh.

"This week, we are facilitating joint discussions with Turkey, the SDF and other coalition partners to promote de-escalation in the area," Dorrian told reporters Thursday.