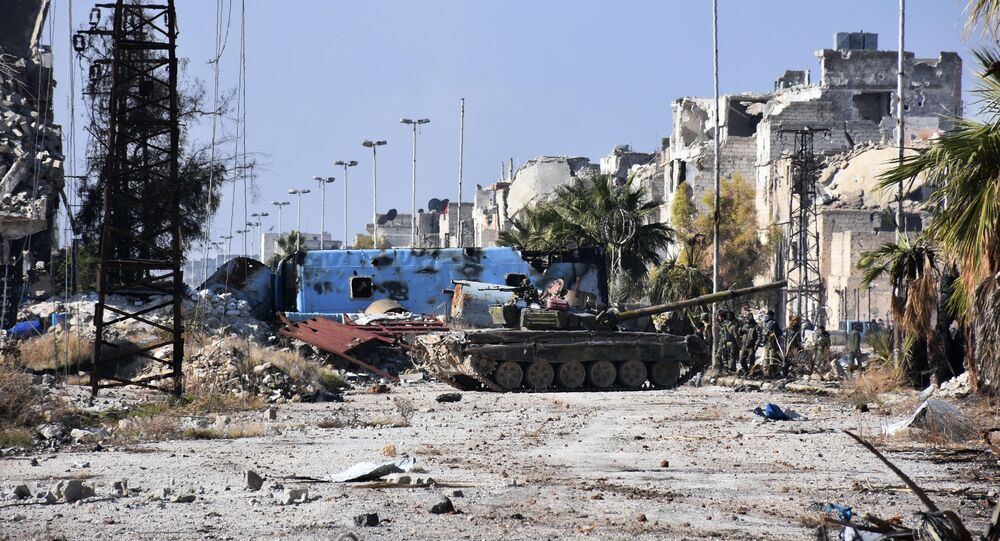 The Syrian Army is poised to restore full control over Aleppo in the nearest future, and life will start to return to normal in the city, Russian military expert Igor Korotchenko told Sputnik.

© AFP 2020 / George Ourfalian
Losing Aleppo: Western Countries Panicking Over Their Lack of a Plan B in Syria
In an interview with Sputnik, military expert Igor Korotchenko, chief editor of the Russian magazine National Defense, suggested that the Syrian government forces will manage to restore full control over Aleppo in the nearest future.

The interview came after Sergey Rudskoy, chief of the Russian General Staff Main Operational Directorate, said that the Syrian Army currently controls 93 percent of the territory of the city of Aleppo.

He related that more than 1,000 militants have laid down arms and left eastern Aleppo; 953 of them have been granted amnesty by the Syrian government.

Speaking to Sputnik, Igor Korotchenko, for his part, predicted that the complete liberation of Aleppo will happen within "days or weeks."

He said that "the situation in Aleppo develops successfully for the Syrian government army and the militia" and that "we can talk about a turning point in the fighting."

He recalled that "a significant part of eastern Aleppo's territory has already been liberated from the terrorists, with civilians returning to their homes."

From the liberated Church of Our Lady in #Aleppo's Old City, Syrian Christians raise the sign of victory.#Syria #WeWillRebuild pic.twitter.com/RVLy8Qo3pw

Korotchenko also recalled that a number of militants had laid down their arms and left Aleppo under the guarantees of the Russian Center for Syrian Reconciliation.

"So I think that in the next few days, maybe few weeks, the government troops will take full control of Aleppo. It will put an end to the suffering of civilians who were under the control of the terrorists," he said.

According to him, those militants who continue to offer pointless resistance to the government forces have resorted to the most barbaric methods of warfare.

"Unfortunately, we see that the provocations continue," Korotcheko said, referring to "the barbaric bombardment of the Russian mobile military hospital in Aleppo" which left two military medics dead and another wounded.

"This barbaric action by the terrorists was clearly masterminded [beforehand], and Western countries which support the jihadists, especially the United States, hold moral responsibility for it," Korotchenko pointed out.

The center noted that Russian servicemen had demined about 8 hectares (almost 18 acres) of territory in Aleppo, removing explosives from 24 buildings, including two schools, two mosques and an electric power substation.

Within the past 24 hours, some 28 militants have surrendered, according to the center.