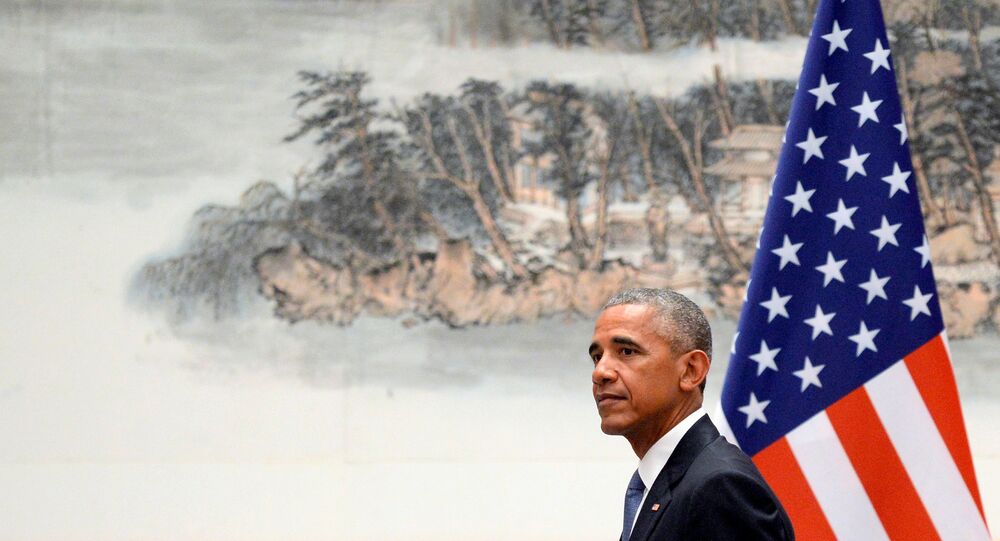 The US establishment's global trade projects are falling apart at the seams with Europeans and Asian nations seeking to establish closer ties with the BRICS bloc and to take part in the China-led New Silk Road and Russia’s Eurasian Economic Union's initiatives, French journalist Karel Vereycken told Sputnik.

If Hillary Clinton wins the US presidential election she will most likely try to pressure the EU into adopting Transatlantic Trade and Investment Partnership (TTIP), Karel Vereycken, a French journalist and founder of the LaRouche-associated Agora Erasmus organization, noted in an interview with Sputnik.

"Hillary [Clinton] and [Barack] Obama are nothing but two heads of the same animal ruling over the quasi-bankrupt financial oligopoly running the City and Wall Street. Never take election promises serious. Since Bill Clinton rammed through NAFTA [the North American Free Trade Agreement], one can expect Hillary to go ahead with TTIP, to reward those on Wall Street that financed her campaign," Vereycken told Sputnik.

NAFTA: The Clintons' Legacy and 'Worst Trade Deal Ever'

© REUTERS / Carlos Barria
Clinton's Presidency 'to Resort to Outright Destabilization' in Asia Pacific
NAFTA, a three-country agreement inked by Canada, Mexico, and the United States which entered into force back in 1994 resulted in the elimination of most tariffs on products traded among the states. However, the critics of NAFTA argue that the accord pushed through by Bill Clinton has dealt a heavy blow to the US' economy.

"Critics of NAFTA say it has resulted in a loss of United States manufacturing and shipping jobs and in less production oversight," The New York Times remarked back in 2012.

Thus, unsurprisingly, the agreement has come under fierce criticism from Republican presidential nominee Donald Trump, who reiterated that NAFTA was "the single worst trade deal ever approved" in the United States, during the first presidential debate.

However, the US political and financial establishment is turning a blind eye to NAFTA's failures, pushing ahead with TTIP and TPP (the Trans-Pacific Partnership) projects.

Along with pushing ahead with its trade initiatives, the US leadership is increasing its military activities in Syria and Iraq.

According to Vereycken, while bidding for hegemony in the Middle East and Southeast Asia, Washington keeps losing ground in both regions.

"The TPP was signed with Asia but countries such as Japan, Australia, the Philippines and now Malaysia, are all running away from the US to work with China and Russia. Therefore, ramming through the CETA was essential for Obama's political and military 'credibility'," the journalist emphasized.

"One by one, Asia Pacific nations are seeing no economic value in being allied to the United States, and they are opting out of the US geo-economic and geopolitical orbits," Maavak pointed out during his recent interview with Sputnik.

© REUTERS / Thomas Peter
President of the Philippines Rodrigo Duterte (L) and Chinese President Xi Jinping attend a welcoming ceremony at the Great Hall of the People in Beijing, China, October 20, 2016.

TTIP 'Risks Ending Up in the Dustbin'

© REUTERS / Francois Lenoir
'Trojan Horse': CETA Designed to Pave the Way for TTIP Implementation
The preconditions for TTIP's failure are already in place, according to the journalist.

Vereycken referred to the fact that Paul Magnette, the Minister-President of Wallonia, has recently forced the EU into making amendments to the Comprehensive Economic and Trade Agreement (CETA), regarded by many as a "Trojan Horse" for TTIP.

These amendments have "driven a stake into the heart" of CETA and simultaneously put a bomb under TTIP.

"Since the Walloons made it a point to expose its undemocratic and unconstitutional nature, CETA is already a walking corpse. And since the Investor State Dispute Settlement (ISDS) mechanisms of CETA — which were rejected — are identical to those of TTIP, the latter risks ending up in the dustbin," Vereycken told Sputnik.

ISDS or Investment Court System (ICS) is a mechanism through which individual companies can sue national governments for alleged discriminatory practices, thus threatening to undermine the sovereignty of nations.

© Sputnik / Sergey Guneev
Contrary to West's Prognosis There is No Room for Rivalry Between China, Russia
At the same time "the American people are increasingly disgusted with the lowness of their own elites," Vereycken remarked.

"The best sign of that is their growing support (70% according to a recent poll) in favor of a return of the Glass Steagall legislation splitting up the banks Too Big to Fail which would end Wall Street hegemony over the US and the dollar. Even Trump and Clinton were obliged to integrate a return to Glass-Steagall in their party platforms," the journalist pointed out.

Indeed, the Glass-Steagall act passed by US Congress in 1933 put limits on the speculating activities of commercial banks. Remarkably, it was former US President Bill Clinton who pushed through the legislation reversing the act in 1999 at the request of Wall Street banks.

"It's a big mistake economically because the repeal of Glass-Steagall led directly to the 2008 Wall Street crash, and without it we're in danger of another one," American political commentator and economist Robert Bernard Reich wrote in his blog in 2015.

© CC BY 2.0 / Bullion Vault / gold bar on coins
Gold Yuan: Post-Dollar World Order Emerging in Eurasia
He called attention to the fact that not only the US government but also America's intelligence services are meddling into Europe's internal affairs.

For instance, American intelligence officials have reportedly forced the German government to ban a deal between China's Fujian Grand Chip Investment and Aixtron, a maker of semiconductor equipment near Aachen.

"US intelligences services were behind a sudden decision by the German government to block a Chinese investor from acquiring Aixtron," Handelsblatt Global reported last Wednesday, citing its sources in the German intelligence community.

So, does it really mean "free trade" or a geopolitical "trade war"? Vereycken asked rhetorically.

"The ongoing tectonic shift is that most Europeans, inside or outside the EU structure, are increasingly attracted by the future-oriented initiatives of the BRICS, the Chinese New Silk Road initiative and Russia's Eurasian Economic Union. The perspective of a win-win strategy of mutual cooperation, driven by innovation and the sharing of benefits, is the only basis for a multi-polar world order and avoiding war," Vereycken stressed.