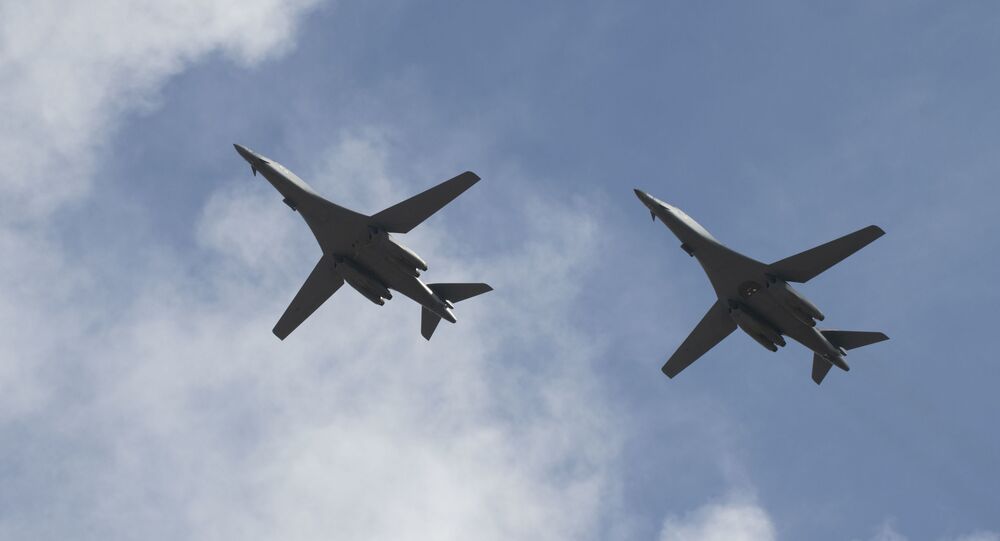 Two US B-1B Lancer strategic bombers have returned to Andersen Air Force Base in Guam to carry out bilateral Bomber Task Force (BTF) operations alongside allies, partners and joint forces with the Pacific Air Forces.

The Pacific Air Forces confirmed on Friday that two B-1Bs and 170 airmen with the 37th Expeditionary Bomb Squadron, 28th Wing, from Ellsworth AFB in South Dakota had arrived in Guam to conduct a variety of training missions.

The two strategic bombers were observed conducting a flyover soon before landing at Andersen AFB on July 17.

@usairforce B-1s & approx. 170 #Airmen assigned to the 37th BS at #EllsworthAFB arrived at #AndersenAFB, Guam for a Bomber Task Force deployment, supporting @INDOPACOM's continued commitment to allies and partners in the Indo-Pacific region.

The base last hosted B-1B bombers of the 9th Expeditionary Bomb Squadron, 7th Bomb Wing, back in May, following the end of a consistent 16-year deployment of the bombers to the island. The Dyess AFB-based aircraft conducted multiple sequenced, bilateral missions at the time.

According to the US Air Force release, the B-1s recently concluded bilateral intercept training with the Koku-Jieitai, or Japanese Air Self-Defense Force (JASDF).

“Koku-Jieitai has steadily and successfully enhanced bilateral response capability and TTPs (Tactics, Techniques, and Procedures) through the training,” JASDF Col. Teruaki Fujita, director of operations, Support Division, Air Staff Office, explained in the release. “We remain committed to bilateral training in order to strengthen alliance capabilities, as well as interoperability to deter and counter threats.”

The Air Force Times reported that a KC-135 Stratotanker of the 909th Air Refueling Squadron at the US’ Kadena Air Base in Japan refueled the bombers en route to Guam.

It’s unclear how long the B-1B bombers will be on the island.

“Our team has been actively preparing for BTF operations to ensure we’re ready and capable of meeting any requirement across the globe,” said Lt. Col. Lincoln Coleman, commander of the 37th Expeditionary Bomb Squadron. “We are excited for the opportunity to integrate with our partners and allies in the Pacific theater and increase our joint lethality.”

The Friday deployment to Guam followed what the Guam Daily Post described as the largest airborne operation on the Western Pacific island “in recent memory.”

Over 400 paratroopers of the US Army Alaska’s 4th Infantry Brigade Combat Team parachuted onto the Andersen AFB on June 30 and reportedly “seized” key objectives necessary for securing the airfield.

“This scenario tested our ability to execute real-world missions and demonstrated that we are capable of deploying anywhere in the US Indo-Pacific Command area at a moment’s notice,” Col. Christopher Landers, commander of the 4th Infantry Brigade Combat Team (Airborne), explained in the Pacific Air Forces release on the matter.