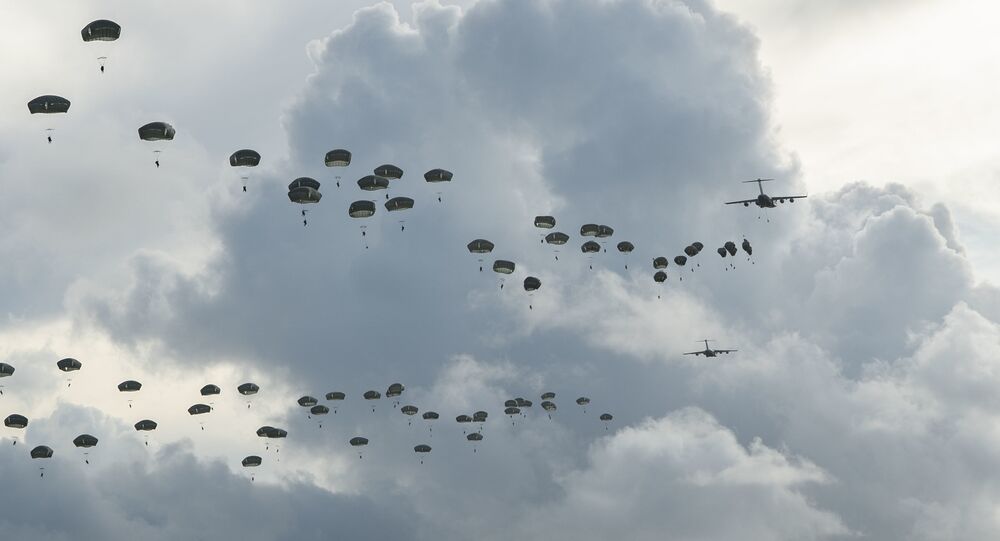 More than 400 US paratroopers parachuted onto Guam’s Andersen Air Force Base on Tuesday in what the Air Force said was the largest mock air raid there in recent memory. Meanwhile, in the nearby Philippine Sea, two US aircraft carriers are performing combat drills.

According to the Guam Daily Post, it was the largest airborne operation on the island in recent memory, involving five C-17 Globemaster III transports which had flown directly from Joint Base Elemendorf-Richardson, near Anchorage, Alaska - a 4,600-mile journey.

During the operation, the paratroopers “seized” key objectives in the base and secured the airfield, from which the US Air Force flies some of its fastest strategic bombers.

“This scenario tested our ability to execute real-world missions and demonstrated that we are capable of deploying anywhere in the US Indo-Pacific Command area at a moment’s notice.” Col. Christopher Landers, commander of the 4th Infantry Brigade Combat Team (Airborne), said in an Air Force news release.

With its two 11,000-foot-long runways, Andersen AFB is the only facility in the western Pacific that can host the Air Force’s largest aircraft, including nuclear bombers and heavy transports. In May, the Air Force dispatched four B-1B Lancer supersonic bombers armed with the latest anti-ship missiles to Andersen to begin patrols across the Philippine and South China Seas  - areas the Chinese People’s Liberation Army Navy (PLAN) typically drills, as they are just off the Chinese coast.

Indeed, in the Philippine Sea at present are two US Navy carrier strike groups, which are also carrying out flight operations for the second week in a row.

Last week, the USS Nimitz and her sister ship, the USS Theodore Roosevelt, drilled in the waterway that separates Guam from Taiwan; this week, the Nimitz was joined by the USS Ronald Reagan, which sailed from Japan to take part in the drills.

“Only the US Navy can integrate a carrier strike force on this scale and consistently project power to protect freedom of the seas,” Rear Admiral James Kirk, commander of the carrier strike group led by the Nimitz, said in the Navy’s June 28 news release.

“With more than 10,000 US Navy Sailors from across the world working together as one cohesive team, these operations are what keep us ready to respond to any contingency.”

USAF RC-135U is flying over #BashiChannel, heading to the offshore airspace over Guangdong, July 1. pic.twitter.com/0d74ZX7tx5

​The flights have involved a variety of electronic and signals intelligence aircraft, maritime patrol aircraft and intelligence drones, as well as support aircraft like aerial tankers.

“These deployments and operations are probably arranged to protect the three Carrier Strike Groups (CSGs) operating in the Philippine Sea against any potential adverse impact of [Chinese] submarines transiting the Bashi Channel on US aircraft carriers,” SCSPI wrote, noting the patrols seemed to indicate a specifically anti-submarine purpose.