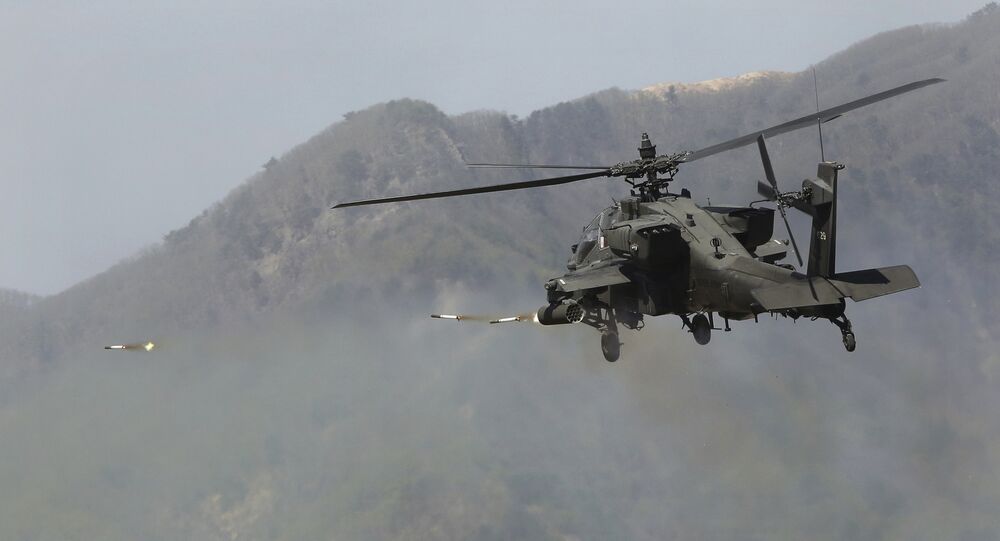 New Delhi (Sputnik): India has urged its military equipment suppliers to expedite the delivery of weapons systems, as tensions along the 4,057 km Line of Actual Control have escalated since April. The US, France and Russia have agreed to supply military systems within three months once an order is placed, say government sources.

Boeing, which had been contracted to produce Apaches for the Indian Air Force, has announced that all five of the multi-role helicopters have been delivered.

The attack helicopter, in addition to its enhanced ability to shoot 'fire and forget' anti-tank guided missiles, air-to-air missiles, rockets and other ammunition, is also versatile in conducting network-centric aerial combat due to its modern electronic warfare system.

Thank you, @IAF_MCC, for your partnership. We’re happy to have completed the deliveries of the 22 #AH64-E Apache and 15 #Chinook helicopters to India. pic.twitter.com/MLAFFXvWIe

“We’re happy to have completed delivery of the 22 AH 64-E Apache and 15 Chinook helicopters to India,” the company said on Friday. The five helicopters have been delivered in one consignment to the Indian Air Force (IAF) at Hindon air base, near the national capital Delhi. Earlier in March, Boeing handed over the last five of 15 CH-47F (I) Chinook heavy-lift helicopters it had contracted to sell India.

“With this delivery of military helicopters, we continue to nurture this partnership and are fully committed to working closely with India’s defence forces to deliver the right value and capabilities to meet their operational needs,” Surendra Ahuja, managing director, Boeing Defence India said in a statement.

Boeing has delivered nearly 2,500 Apache helicopters to 16 nations to date, including the US, the Netherlands, the United Kingdom, Greece, Japan, India, Singapore, South Korea and Saudi Arabia.

The American-made helicopters feature two high-performance turboshaft engines and a maximum cruise speed of 284 kilometres per hour. The Apache can carry a maximum of 16 Hellfire missiles, giving it unprecedented firepower.

India finalised its order with Boeing for the production, training and support of 22 AH-64E Apache and 15 CH-47F(I) Chinook helicopters in September 2015. Earlier this year, India and the US signed a contract for the acquisition of six Apaches for the Indian Army during American President Donald Trump’s visit to New Delhi.

The Indian defence ministry has also urged countries like Russia, France and Israel to expedite contractual deliveries of military equipment they'd agreed to undertake in the past. Defence Minister Rajnath Singh, during his visit to Moscow in June, confirmed that Russia will supply some of the weapon systems to India at an early date.

© AP Photo
India, China Agree to Continue Dialogue to De-Escalate Border Row, New Delhi Says
Indian government sources confirmed to Sputnik that the Quick Reaction surface-to-air missile system will be delivered to India by the Russian firm at an early date. Later this month, the first batch of Rafale fighter jets will also arrive to be deployed along the Chinese border.

India and China have been engaged in a bitter border stand-off in several places, and there diplomatic efforts underway to diffuse the tension amid the withdrawal of troops by the two sides in Ladakh region.