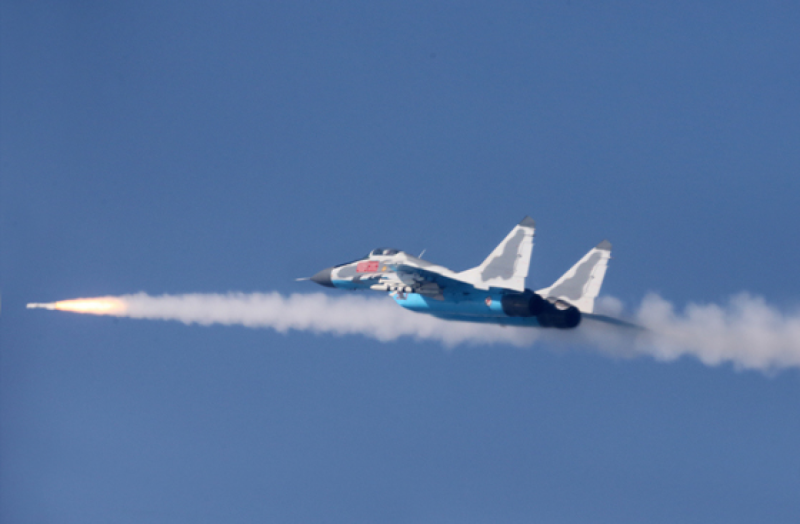 In some rare photos of the Korean People’s Anti-Air Force (KPAAF), a MiG-29 fighter engaged simulated targets during an inspection by North Korean leader Kim Jong Un, who holds several official titles, including chairman of the State Affairs Commission.

Last week, Kim and several other top North Korean officials “inspected a pursuit assault plane group,” according to the Korean Central News Agency (KCNA). The planes were identified as MiG-29 fighter jets, and the location was noted by experts to be Sunchon Air Base.

Kim also inspected the air force’s Su-25 ground attack aircraft, which, like the MiG-29s, were built in the former Soviet Union. The country had 18 MiG-29s and 34 Su-25s at last count.

According to KCNA, the pilots put on an air show, engaging in simulated dogfights and even shooting down targets for the dignitaries. The outlet released some rare photos from the event that were reshared on social media by Western observers.

International Institute for Strategic Studies analyst Joseph Dempsey noted that photos of Kim inspecting the aircraft on the tarmac gave the first confirmed evidence that the Democratic People’s Republic of Korea (DPRK) is arming its aircraft with Soviet-made Kh-29 air-to-surface missiles.

​The Kh-29, referred to by NATO as the AS-14 “Kedge,” is very flexible in its use, capable of striking surface targets on land or sea up to 16 nautical miles away and guided by a variety of tracking devices. The Soviet Union introduced the weapon in 1980.

From the foundation of the DPRK in 1948 until the demise of the Soviet Union in 1991, the USSR was one of North Korea’s closest allies, supplying the fledgling socialist country with military equipment as well as industrial expertise. Much of the DPRK’s more advanced military equipment dates to that era, when advanced jets like the MiG-29, designed to compete with the United States’ F-15 Eagle interceptors, were passed to Pyongyang for use.

While the KPAAF once painted its fighters in a characteristic, dark green shade, it has switched in recent years to the gray-blue that has become an international standard. Sputnik recently noted a similar shift by China’s People’s Liberation Army Air Force, which announced it was abandoning more visible paint schemes for ones that blend in with the sea and sky.

While the DPRK does sport some of the more advanced aircraft out there, they serve alongside some very old-fashioned planes, too. Last August, photos emerged of a bombing range on the country’s east coast used by ancient An-2 biplanes, originally built by the USSR in the 1940s as a durable flyer for forestry service.

Sputnik reported the KPAAF is not only using these “tractors with wings” as cheap ground attack planes, but also as stealthy infiltration aircraft. Because they are so slow and can fly so low, the planes scarcely read as threats on enemy radars, which would enable them to slip past South Korean air defenses in the early hours of a shooting war to deliver special forces deep behind enemy lines or to carry out scouting missions.