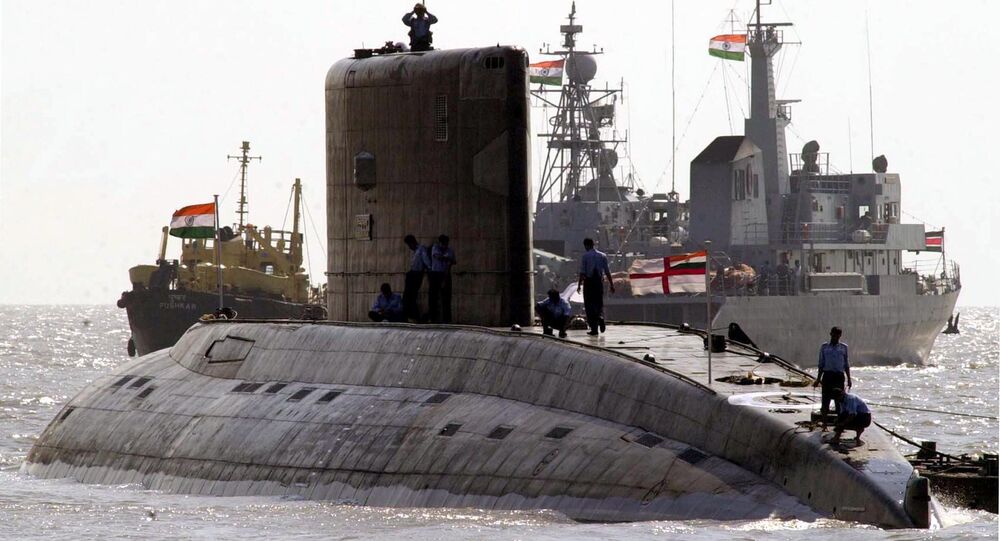 To date, the Indian Navy has relied on a 1997 contract with the US for assistance if one of its submarines were to meet with an accident underwater. In such a situation, the US Navy would fly out its Deep Submarine Rescue Vessels (DSRVs) on massive transport aircraft before being transferred to a ship that would need to sail to the accident site.

New Delhi (Sputnik): The Indian Navy claimed on Wednesday that it had successfully conducted a "live mating" exercise with its submarine rescue vessel at Visakhapatnam, the Navy's submarine base on the eastern seaboard. The development was termed "a historic achievement" by the Navy.
The Indian Navy claimed that its Deep Submergence Rescue Vehicle (DSRV) — built with the help of the UK's James Fisher & Sons — undertook a drill, including personnel transfer from the bottomed submarine Sindhudhvaj, which was simulating a submarine in distress, to surface using the DSRV.

© AFP 2021 / STR
Indian Navy Looks to Raise High Performance Unmanned Submarine Squadron by 2021
The Indian DSRV has the capability to rescue personnel from a distressed submarine (DISSUB) up to a depth of 650 metres. It is the latest in terms of technology and capabilities.

Currently, most submarines operated by the Indian Navy are two decades old. Prior to the induction of deep submerged rescue vessels, the Navy had been grappling with rudimentary submarine rescue capabilities comprising rescue "bells", which are containers that can be lowered to the submarine in distress up to a maximum of 150 metres.

Prior to the induction of the DSRV, the Indian Navy lost two Kilo-class submarines — INS Sindhurakshak and INS Sindhuratna — with a large number of sailors on board in 2013 and 2014. It is considered that the Navy lost many of its sailors in the accidents mainly due to the absence of modern rescue vessels that support deep sea diving for a prolonged period.

READ MORE: Indian Navy Inducts Its First Submarine Rescue Vessel
With the availability of the DSRV, the Indian Navy can now quickly deploy its submarine rescue systems on board ships or fly them out on the Indian Air Force's own C-17 heavy transport jets.

At a later stage, the DSRV will receive support from 118-metre-long diving support vessels with a roughly 7,650-tonne displacement capacity being built at the state-owned Hindustan Shipyard Limited.