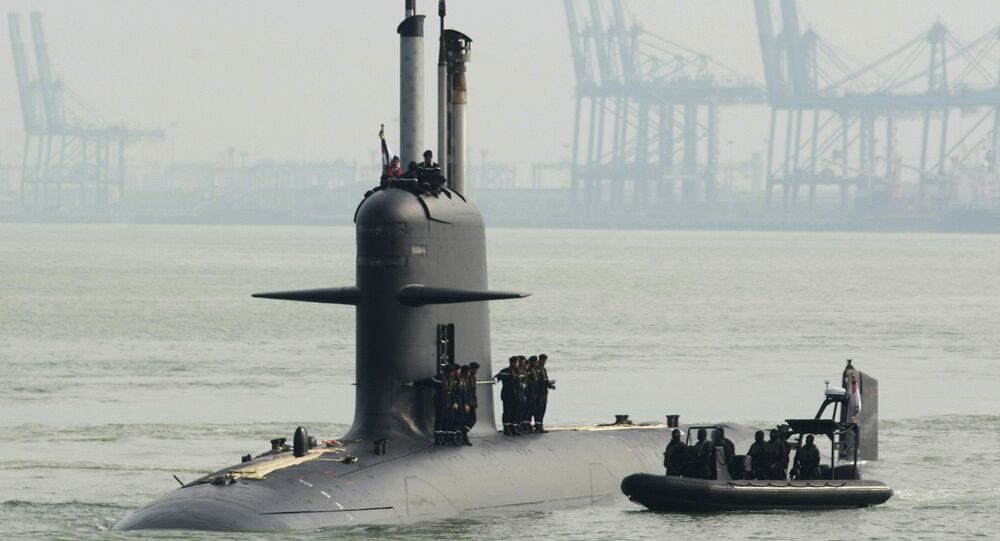 Six Scorpene-class submarines are being manufactured at India's Mazgaon Dock Limited facility with the technical support of French naval shipbuilding firm Naval Group, previously known as DCNS. All six submarines are expected to join the Indian Navy by 2022.

With six Scorpene-class submarines expected to join the Indian Navy in the next four years, the country's defence ministry has pushed forward plans to build an advanced repair facility.

The ministry has signed a contract worth $57.59 million with French firm Thales to set up a repair facility at a port off the eastern coast, an Indian Defence Ministry official told Sputnik on the condition of anonymity.

"The ministry signed a contract for setting up an advanced level repair facility for the underwater surveillance system, electronic support measures and external communication system for Scorpene  (P-75) submarine for Indian Navy with Thales DMS France," the official said.

© AP Photo
Indian Navy to Get More Stealth Power as it Launches Third Scorpene Submarine
Another official told Sputnik that the repair facility will assist in the repair of six Scorpene-class submarines, without delay. The Indian government is also seeking to ensure that the French firm trains Indian technicians working in the repair facility, while promptly making the equipment for repair work available to them.

The Scorpene-class submarines are being manufactured at the Mazgaon Dock Limited facility with technical support from French naval shipbuilding firm Naval Group, earlier known as DCNS. The first boat was scheduled to enter service in 2012, seven years after signing the deal, but India's MDL shipbuilder could deliver the submarine only as early as December 2017.

The two other Scorpene-class submarines are now set to join the Indian Navy in 2019. Subsequently, every year after 2019, one submarine is going to be delivered to the Indian Navy, with the last one entering service in 2022.

By 2022, the Indian Navy expects at least 18 submarines to be in its service, of which eight will be indigenous.