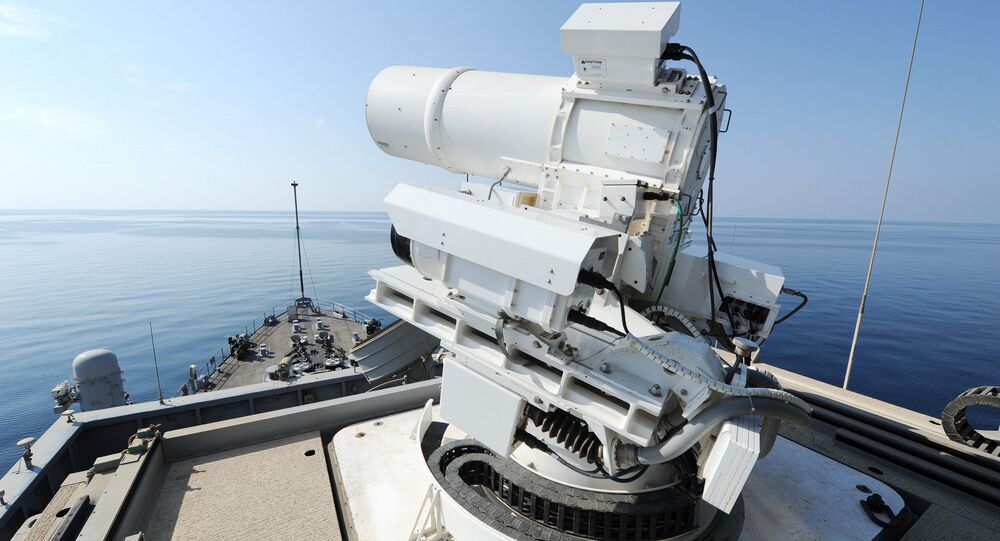 In an attempt to outflank Russian and Chinese naval tactics, the US Navy is rushing to put a laser defense system on its destroyers - first, for the purpose of improving targeting, but eventually scaling the lasers up to being weapons in themselves.

The US Navy aims to begin replacing its present anti-missile weapons systems with laser-based ones beginning in 2021 with the guided missile destroyer USS Preble. This, it hopes, will spawn a new wave of innovation that will enable the Navy to respond to advances in naval tactics by Beijing and Moscow that could overrun its existing shipboard defenses.

"The key for us is HELIOS: A shipboard laser that will take the place of what we have now," Rear Adm. Ron Boxall, who heads the surface warfare directorate for the Chief of Naval Operations, told Defense News in a May interview.

The Navy's present shipboard point defense systems include the Close-in Weapon System (CIWS, pronounced "see whiz") and the Rolling Airframe Missile (RAM), both of which are used as the last line of defense against incoming projectiles.

However, HELIOS will begin to change that. The High Energy Laser and Integrated Optical-dazzler with Surveillance has a roughly five-mile range and will start out as a 60-kilowatt laser mounted on a guided missile destroyer that'll be used for little more than improved targeting, but Boxall hopes it will quickly scale up to at least 500 kilowatts and start actually destroying incoming missiles on its own.

The problem, however, is that the US Navy's never fired a 500-kilowatt laser. In 2014, the USS Ponce was donned with a 40-kilowatt laser known as the Laser Weapon System (LaWS). Boxhall told Defense News that's exactly why he's pushing for lasers to start replacing point defense systems now, comparing the move to a decision by Spanish conquistador Hernan Cortes in 1519 to burn his fleet of ships after landing in what is today Mexico, on the edges of the Aztec Empire.

"When Cortes burned his boats it was a message that they were going to win, and they were only going to win by going forward," Boxall said. "Similarly, we are making the decision to put the laser on our DDGs. It's going to start with Preble in 2021, and when we do that, that will now be her close-in weapon that we now continue to upgrade."

Of course, even a 150-kilowatt laser won't shoot down a missile very quickly, but Bryan Clark, a retired submarine officer and analyst with the Center for Strategic and Budgetary Assessments, told Defense News that with the right motivation, it wouldn't be long before a 1-megawatt laser was on a surface vessel.

"Once you get past 500 kilowatts, you start getting to a laser that can take down incoming cruise missiles — even supersonic ones," he noted.

The report, titled "Navy Lasers, Railgun, and Gun-Launched Guided Projectile: Background and Issues for Congress," aimed to inform lawmakers about what the Navy calls the "Navy Laser Family of Systems" (NFLoS) in order to evaluate whether it has enough money to proceed at the desired pace.

The Navy handed Lockheed Martin a $150 million contract in January 2018 to develop HELIOS, Sputnik reported. That provides for the delivery of two systems — one for the Preble and one for land-based testing. However, the CRS report notes that if they're successful, the contract could be expanded for 14 more HELIOS systems at a total cost of $942.8 million.

However, the Pentagon is enthusiastic about the possibilities of laser weapons. Since 2017, Defense Department spending on directed energy weapons has increased significantly, more than doubling to $1.1 billion, Sputnik reported last November. In addition, the Pentagon has sought an additional $304 million in the Fiscal Year 2020 budget for developing a space-based particle weapon for intercepting ballistic missiles.

Missile threats to ships have become a very real fear among US naval strategists in recent years, as China has surged forward with its medium-range missile and anti-ship missile programs.

"We know that China has the most advanced ballistic missile force in the world," James Fanell, a retired US Navy captain and former senior intelligence officer with the US Pacific Fleet, told Reuters last month. "They have the capacity to overwhelm the defensive systems we are pursuing."

Some of the dangerous weapons developed by Beijing include the YJ-12, which has a 400-kilometer range, and the YJ-18, which has a 540-kilometer range. The People's Liberation Army Rocket Force (PLARF) also sports anti-ship ballistic missiles like the supersonic CM-401, which can hit targets 290 kilometers away, and the DF-26 intermediate-range missile, dubbed the "Guam Killer" because of its nuclear capability and 3-5,000-kilometer range. PLARF is also well ahead of the US in developing hypersonic missiles, Sputnik reported.

These weapons, which far outpace those US ships could respond with, threaten the US Navy for hundreds of miles out from the Chinese coastline, forming a buffer zone that would hamper US efforts to operate in, for example, the South China or East China Seas in the event of a shooting war.

Indeed, at the Zhuhai Air Show last November, an animation accompanying the debut of the CM-401 showed a swarm of missiles hitting enemy warships, including aircraft carriers resembling those used by the US Navy.

Defense News noted that existing doctrine calls for ships using the Aegis missile system to fire two anti-air missiles at each incoming threat, and then only fire more if the first salvo fails. Given that these missiles cost one ten-thousandth what a US aircraft carrier does, it would be very cost-effective to launch swarms of missiles at US fleets in the knowledge that their anti-air defenses only have so many rounds of ammunition. Sooner or later, missiles will start getting through.

The intention with HELIOS is to first enhance, then accompany the systems presently governed by Aegis.

However, the laser would only be able to engage so many targets at a time, Clark noted, so it'll never fully replace missiles or other systems.

"If you have directed energy, it's ‘shoot until you think you've killed the thing you are shooting at and then move on to the next target,'" he said. "If you have a salvo coming in, it will hit some number of them, but a lot depends of their geometry, how good a shot you get at them, how the threats are spaced, how far away they are. The laser can get maybe two, three, five or six of them, then they are on you. So, you have to have some kinetic weapons as well to fill the gap."

US Military Pilots in Mideast Increasingly Attacked by Lasers – Pentagon