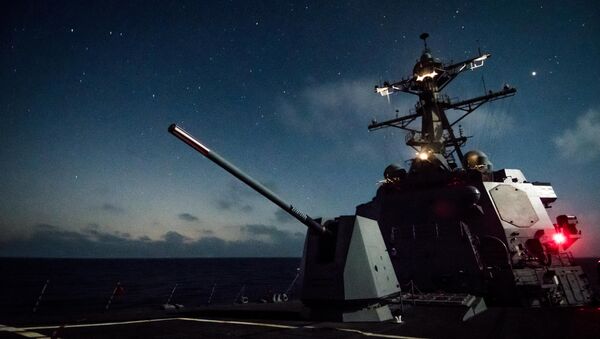 A US Navy vessel’s standard Mk 45 deck gun fired 20 hyper velocity projectiles – which are getting Pentagon funding over the electromagnetic railgun - in the shadows of the Rim of the Pacific (RIMPAC) 2018 international exercise, a new report says.

Twenty hyper velocity projectiles were fired from the destroyer USS Dewey as part of a study conducted by the US Navy and the Defense Department's Strategic Capabilities Office (SCO), unnamed officials familiar with the test told USNI News Monday.

The maritime warfare exercise is held in the waters off of Honolulu, Hawaii, every two years.

Russia's Electromagnetic Weapons Could Be 'More Efficient Than Nuclear Weapons'

The test was part of a greater SCO effort to prove a 40-year-old deck gun filled with freshly designed ammunition could effectively neutralize large unmanned aerial vehicles (UAV) and cruise missiles, USNI News added. The report makes no mention of whether the test was a success.

The hyper velocity projectile is being cast as a low-cost alternative to the weapons currently used against cruise missile threats. Each Evolved Sea Sparrow Missile, for example, costs $2 million; every Rolling Airframe Missile runs another $1 million; shooting a single Standard Missile 2 has a price greater than $400,000.

"If you think about the kinds of threats you might face in the Middle East, the lower-end cruise missiles or a larger UAV, now you have a way to shoot them down that doesn't require you use a $2 million ESSM or $1 million RAM, because a hyper velocity projectile — even in the highest-end estimates have it in the $75,000 to $100,000 range, and that's for the fanciest version of it with an onboard seeker," Bryan Clark of the Center for Strategic and Budgetary Assessments told USNI News.

Officials told the publication the RIMPAC test was unclassified, but the Office of Secretary of Defense and the Office of Naval Research have declined to acknowledge it.

There is a chance Beijing knew about the weapons test before USNI News did. A Chinese People's Liberation Army Navy surveillance vessel approached the exclusive economic zone of the islands during the 2018 drills to keep tabs on what was happening there, Sputnik News reported. A retired Chinese general suggested in comments to South China Morning Post that the spy ship's presence was a response to US surveillance of Chinese warships.

The PLA Navy made headlines last week when a Type 072II-class landing ship equipped with a demonstrator electromagnetic railgun, another weapon rival countries are racing to develop, was spotted sailing out for sea trials. The prospect of China fielding the weapon before Washington has been described as a potential "strategic coup" for Beijing by some US analysts.

The hyper velocity projectile is a touch slower than rounds fired from an electromagnetic railgun but provides a similar capability to shoot down aerial threats with very fast, relatively cheap ammo rounds. In the eyes of the SCO, it makes sense to put the projectiles in Mk 45 deck guns, which are mounted on virtually every American warship in the surface fleet.

It's "not that we're not interested in railgun — we are — but if you look at the delta between fielding in quantity — we have [more than] 1,000 powder guns; we have very few railguns," said Will Roper, founding director of SCO, during a 2016 talk at the Center for Strategic and International Studies in Washington.

The SCO was established by then-Deputy Secretary of Defense Ash Carter in 2016. The office's task was to discover new applications for old technological systems.

The SCO's days appear to be numbered, however. Page 43 of the National Defense Authorization Act for fiscal year 2019, signed by US President Donald Trump on August 13, 2018, provides for the secretary of defense to submit a plan for eliminating the office "not later than March 1, 2019," to Congressional defense committees.