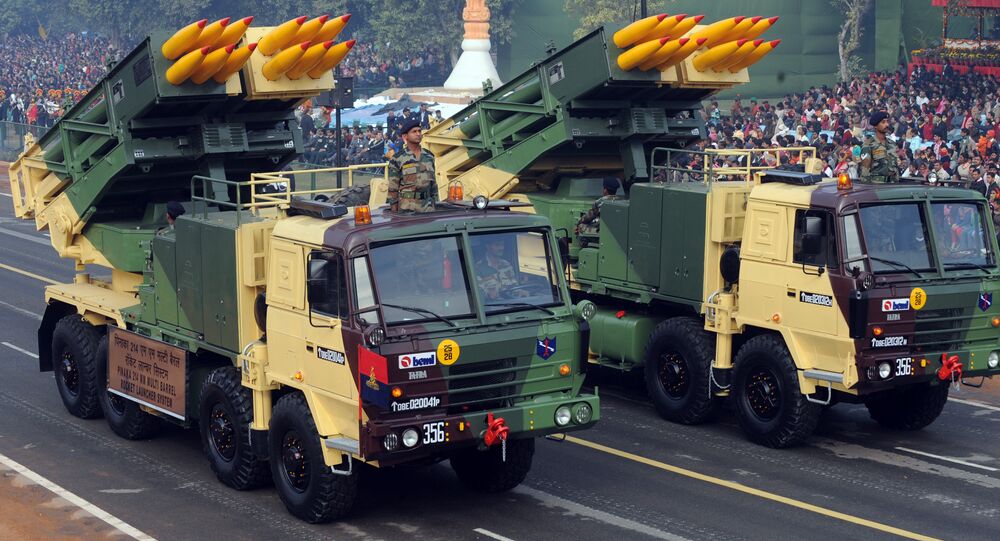 The newly developed and tested weapon system can virtually decimate 900 square metres at a 20-90 kilometre range by firing a salvo of 12 rockets within 44 seconds. It is believed that the guided Pinaka system may be developed for delivering nuclear warheads at short ranges.

New Delhi (Sputnik): The Defence Research and Development Organisation (DRDO) has conducted a third successful test of the multi-barrel guided weapon system Pinaka on Tuesday at the Pokharan range in the north-western state of Rajasthan.

Earlier on Monday, the DRDO conducted a twin testing of the system — one that can engage targets from 20 km to 90 km range. The short-range guided Pinaka weapon system is equipped with a state-of-the-art guidance kit comprised of an advanced navigation and control system.

"The weapon system impacted the intended targets with high precision and achieved desired accuracies in all the missions. Telemetry Systems tracked and monitored the vehicle through the flight path. All the mission objectives have been met", the Indian Defence Ministry said.

© CC BY 3.0 / Jjamwal / Pinaka MBRL
India Successfully Test Fires Multi-Barrel Guided Rocket Pinaka Near Pak Border
The guided rocket is powered by a solid-propellant motor and can be fitted with three warheads: a pre-fragmented high-explosive (PFHE), or an incendiary, or a reduced high-explosive (RHE) practice warhead. Flight stabilization is provided by six clipped-deltas side-folding fins towards the rear of the rocket. The Pinaka rocket will gradually replace the Russian SMERCH, which can flatten an area of 1.1 square kilometres.

It is believed, although not overtly, that the guided Pinaka system may have been developed for delivering nuclear warheads at small ranges. The quick reaction time and high rate of fire gives an edge to the army during a conflict situation. It takes only 44 seconds to dump 7.2 tonnes of high explosives onto a target 70 km away with an accuracy of 25 metres. The weapon's capability to incorporate several types of warheads makes it deadly for the enemy, as it can even destroy their solid structures and bunkers spread over a 900 square metre area.