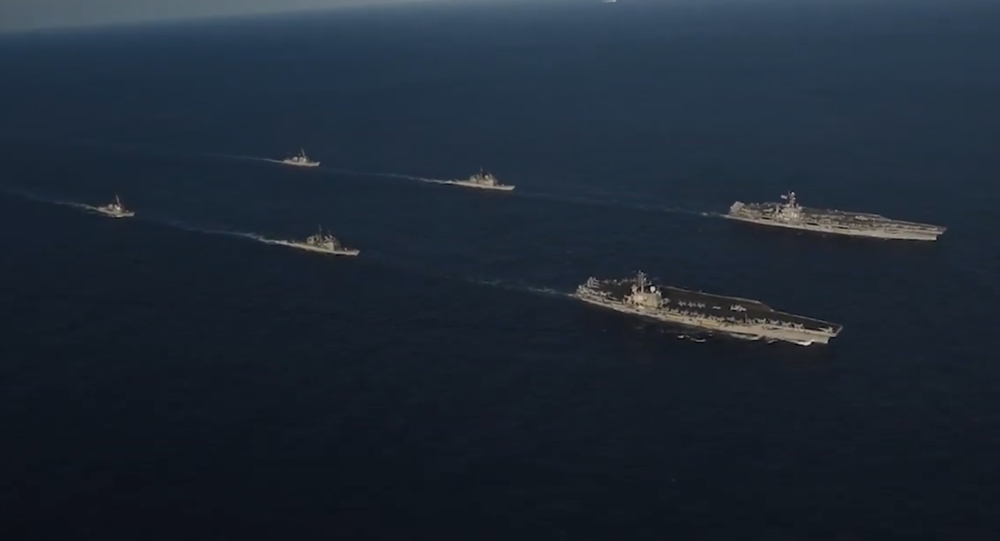 Two US Navy aircraft carriers, the Ronald Reagan and John C. Stennis, recently conducted dual carrier ops in the Philippine Sea, not far from the South China Sea, where tensions and tempers have been steadily rising between the US and China.

The deployment of the two supercarriers, along with their battle groups, together amounts to 10 ships, about 150 aircraft and 12,600 sailors and US Marines, Military.com reported.

"The increased presence of two carrier strike groups in the region highlights the US commitment to a free and open Indo-Pacific," Vice Adm. Phil Sawyer, commander of the 7th Fleet, said in a statement on the deployment. However, the Navy insists such dual-carrier operations aren't uncommon.

"Bringing two carrier strike groups together provides unparalleled naval combat power, tremendous operational flexibility and reach across the region. It shows our forces at their best, operating confidently at sea, and demonstrates that the US Navy will fly, sail and operate anywhere international law allows," the statement continues.

​While the Reagan's home port is in nearer waters, at Kanagawa in Japan, until last month the Stennis operated out of distant Bremerton, Washington, on the west coast of the continental United States. KCPQ in Seattle reported in late October that the Stennis was headed for Norfolk, Virginia, following this six-month deployment, where it will undergo an extensive overhaul.

The Reagan, on the other hand, is scheduled to call to port in Hong Kong, the former British colony returned to China at the end of the last century. Earlier this year, the Chinese government rejected a request for a port call by another US carrier, the USS Wasp. This time, however, the Reagan and its accompanying battle group will be permitted to put in at the Pearl River delta city, which the Japan Times says is likely to reduce tensions ahead of meetings between US President Donald Trump and Chinese President Xi Jinping at a Group of 20 summit in Buenos Aires, Argentina, on November 30.

On Tuesday, Aircraft Spots, a Twitter account that monitors military flights, noted that two B-52 heavy bombers based in Guam flew across the Philippine Sea and into the South China Sea via the Luzon Strait. The Japan Times noted that it was possible the bombers coordinated training with the carrier strike group.

​Sawyer's statement that the presence of the ships "demonstrates the US Navy will fly, sail and operate anywhere international law allows" was a swipe at China, with which the US has had some close calls in recent months in the South China Sea, including in late September when a US Navy destroyer and a People's Liberation Army-Navy (PLA-N) destroyer came within 45 yards of one another; the Chinese ship challenged the US vessel as it transited waters claimed by Beijing.

The Chinese government claims most of the South China Sea as its territory, claims buttressed by the construction or expansion of islands in the waterway that many other countries, including the US, don't recognize as legitimate. Accordingly, the US doesn't recognize water surrounding those islands as part of Beijing's territorial waters and doesn't respect them as such. Instead, the US Navy carries out "freedom of navigation operations" in which it ignores Chinese claims and warnings.

In turn, the PLA-N has placed weapons on those islands and held hefty naval drills in the waterway, especially featuring its new flagship, the aircraft carrier Liaoning. A second carrier, still known only as Type 001A, is expected to enter full service with the Chinese navy early next year.

Chinese and American leaders met at the Association of Southeast Asian Nations (ASEAN) summit in Singapore last weekend and again in Papua New Guinea at the Asia-Pacific Economic Cooperation (APEC) summit last week. US Vice President Mike Pence's plane flew within 50 miles of the Spratly Islands on his way to the ASEAN summit, a chain in the South China Sea claimed by China, Sputnik reported.

Sputnik has reported on how the US strategy in what it calls the "Indo-Pacific" region has been to try and draw nations away from Beijing's influence by providing an alternative to China's Belt and Road Initiative, but that ASEAN nations by and large resent being asked to pick sides in the geopolitical conflict and trade war between the two economic superpowers.

Papua New Guinea Prime Minister Peter O'Neill said, in a statement Sunday after the close of the APEC summit, that "the entire world is worried" that the US-China rivalry could spiral out of control.