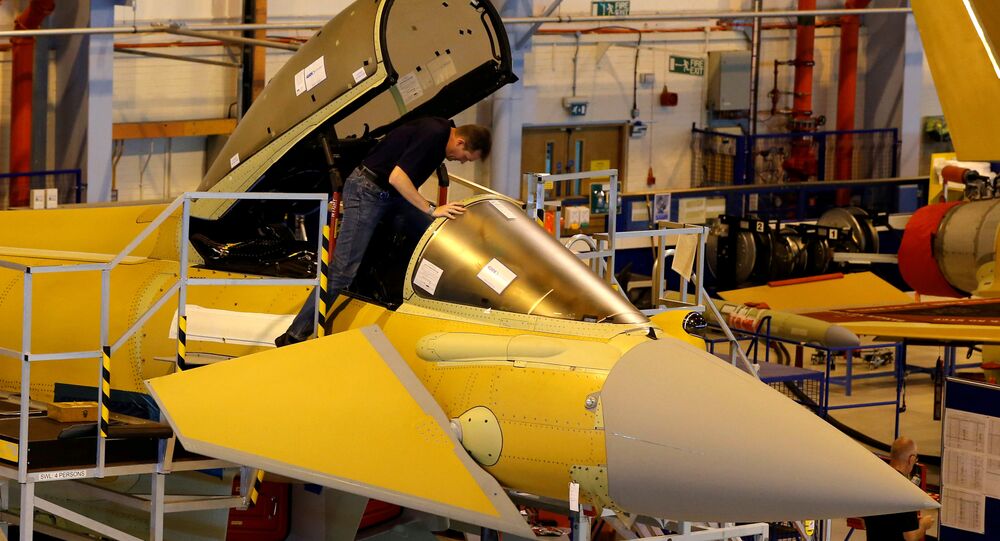 British defense manufacturers BAE Systems said on Tuesday, October 10, they planned to cut 2,000 posts as a result of weaker demand for Typhoon fighters and Hawk jets. Workers, who’ll lose their jobs, should consider switching to industries that don’t rely on war for profit, an activist told Sputnik.

Britain's biggest defense contractor, BAE Systems has announced 2,000 job cuts, amid a slowdown in orders for its flagship Typhoon jet.

According to the spokesperson for the Campaign Against the Arms Trade (CAAT), the skills of BAE employees should be "put to good use" in a different sector.

"It would be a more positive way of using these people's engineering skills, rather than the huge amount of support it provides for the arms industry," Andew Smith told Sputnik.

Mr. Smith stressed that the UK government should be encouraging British firms to switch away from producing arms to investing in "more sustainable industries which do not rely on war and conflict to make a profit."

BAE will cut 750 jobs at the Warton and Samlesbury plants in Lancashire, parts for the Eurofighter Typhoon are manufactured.

"The volume of work is not there so it's not a surprise that they need fewer people. They are trying to get another batch for Saudi Arabia. They have been negotiating, but as yet that has not materialized," he said.

This is truly appalling news for BAE’s workers and for communities across the UK @NiaGriffithMP https://t.co/YfOeuef1dn

Another 400 aerospace jobs will go in Brough, Lancashire, and 245 at RAF bases at Marham and Leeming, while 340 maritime jobs will be lost in Portsmouth, and 180 largely clerical jobs in London and Guildford.

"We are announcing actions at some of our UK sites to align our workforce capacity more closely with near-term demand and enhance our competitive position to secure new business. Those actions are necessary and the right thing to do for our company, but unfortunately include proposed redundancies at a number of operations. I recognize this will be difficult news for some of our employees and we are committed to do everything we can to support those affected," said BAE's Chief Executive, Charles Woodburn.

750 proposed job losses in Warton and Samlesbury is devastating news for Lancashire. Govt need to address the uncertainty in the industry https://t.co/Fn5kkVFcuo

The trade union Unite reacted angrily to the job cuts.

"These planned job cuts will not only undermine Britain's sovereign defense capability, but devastate communities across the UK who rely on these skilled jobs and the hope of a decent future they give to future generations," said Unite assistant general secretary Steve Turner.

Selling jets to Saudi Arabia to murder Yemenis has about nothing to do with the defence of our nation--in fact it's the opposite.

​"The UK government must take back control of our nation's defense and with it, play its part in supporting UK defense manufacturing jobs. Too much taxpayers' money earmarked for defense spending is going to factories overseas. By 2020, 25 pence of every pound spent on UK defense spending will find its way to American factories alone rather than being spent here in the UK," said Mr. Turner.

"This state of affairs is not only hollowing out Britain's sovereign defense capability and British manufacturing, but leaving the nation's defense exposed to the whim of foreign powers and corporate interests," he added.