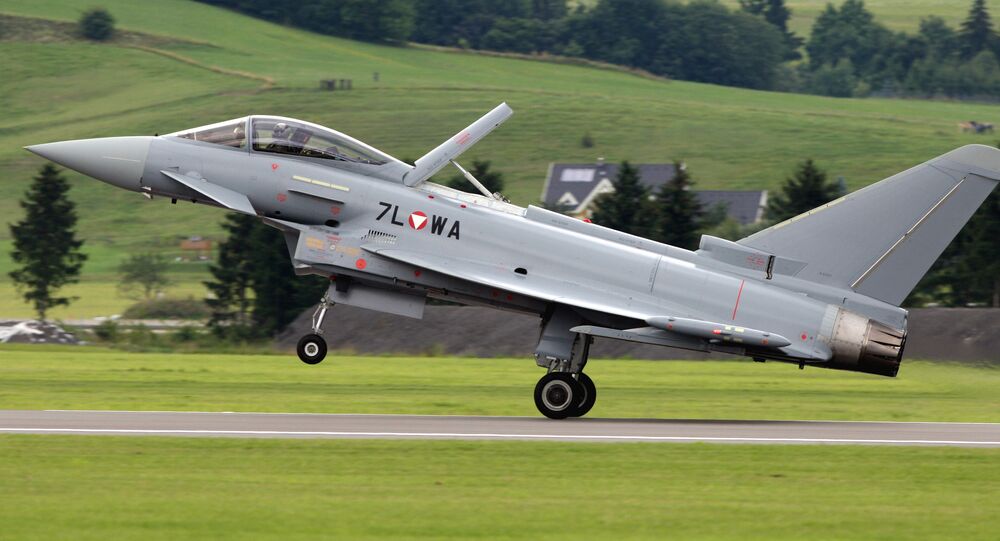 The UK's key defense manufacturer BAE Systems reportedly plans to cut 1,000 jobs this week amid uncertainty over orders for its Typhoon fighter jet. Sputnik spoke to a defense analyst about the future of the Typhoon.

BAE Systems, which employs 34,600 people in the UK, is reportedly set to cut 1,000 jobs after a slowdown in orders for the Typhoon fighter jet.

The Gvt must come forward urgently to secure these jobs at BAE — @NiaGriffithMP https://t.co/AamKKyW3pX

Caught in a 'Delicate' Situation

The Typhoon, sometimes known as the Eurofighter, is a joint project between BAE, France's Airbus and Italy's Finmeccanica, and defense commentator and analyst Tim Ripley said the news of 1,000 job losses at BAE was "plausible."

"We are at the tail-end of the orders of Typhoon for the RAF and the volume of work is significantly reduced. They produced 160 Typhoons for the RAF but they are now down to the last 12 for Oman and then they have had an order for 24 from Qatar," Mr. Ripley told Sputnik.

"But the volume of work is not there so it's not a surprise that they need fewer people. They are trying to get another batch for Saudi Arabia. They have been negotiating, but as yet that has not materialized," he added.

An impressive video showing the expansive manoeuvrability of the Eurofighter Typhoon! https://t.co/k4TF1CEvNx

Mr. Ripley also said the recent dispute between Saudi Arabia and Qatar may well have played a part in the delay in bringing in that order from Riyadh.

"Much as getting an order from Qatar may have been helpful, Qatar is now embroiled in a spat with its neighbor, so it's a very delicate situation. You want an order from Qatar, but you may end up upsetting the Saudis," he told Sputnik.

Mr. Ripley said the Typhoon was a plane which had sold quite well — 600 have been delivered to the Eurofighter consortium's partner nations in Europe, and there had also been orders from Austria, Kuwait, Oman, Qatar and Saudi Arabia.

"But it's not on the scale of some American aircraft. Its life as a product has peaked," Mr. Ripley said.

He also said there was no suggestion the Typhoon had not performed well for those countries who had bought it.

Sad news Bae systems Warton laying off 1,000 people. Local company to me, with friends working there Bae say, 'nothing to do with brexit'.

"It has been on operations with the British and the Italians and the Saudis have used them in Yemen. Of its generation it is on a par but all these things are relative. The American F-35 claims to be a stealth plane, which is something Typhoon isn't really.

"But not every country can afford the F-35 and it has its own limitations," Mr. Ripley added.

'Devastating' or Not, If True?

He said BAE was also involved in manufacturing the rear fuselage of the F-35 at a factory at Samlesbury, Lancashire and that work was increasing, and he said it may be possible for some of those who had lost their jobs to retrain for jobs on the production line there.

"BAE is one of the area's biggest employers but there are universities, and tourism, and wind farms and it's not quite the Victorian idea of industrial dependency," said Mr. Ripley.

Really worrying news for communities who depend on these aerospace jobs. We must support Typhoon and future orders https://t.co/jWLSJzhnuJ

Ironically although France is part of the Eurofighter project it also has its own fighter jet, the Dassault Rafale, which has been outselling the Typhoon.

However, Labour's Shadow Defense Secretary Nia Griffith said the reported job cuts would be "devastating" for those involved.

"The men and women who work on the Eurofighter are highly skilled and the potential loss of these jobs would have an appalling impact on them, the local economy and wider supply chains," she said.

"The government must come forward urgently with a clear plan to secure these jobs at BAE, as well as a proper defence industrial strategy to give the industry the certainty that it needs," said Ms. Griffith.

Labour leader Jeremy Corbyn recently promised to ban arms sales to countries like Saudi Arabia which have used them against civilian targets.

Mr. Ripley said his "virtuous" policy caused problems for many Labour Party supporters in the north west of England who lived in constituencies which rely on BAE jobs.

He also said it was a "dilemma" for many Labour supporters in Lancashire, as was Mr. Corbyn's stand against renewing the Trident nuclear submarine program, which is based in the nearby town of Barrow-in-Furness.

BAE Chief Executive Charles Woodburn said in August he was confident about future orders for the aircraft.

"We obviously have to review our production demand very carefully," he said at the time.