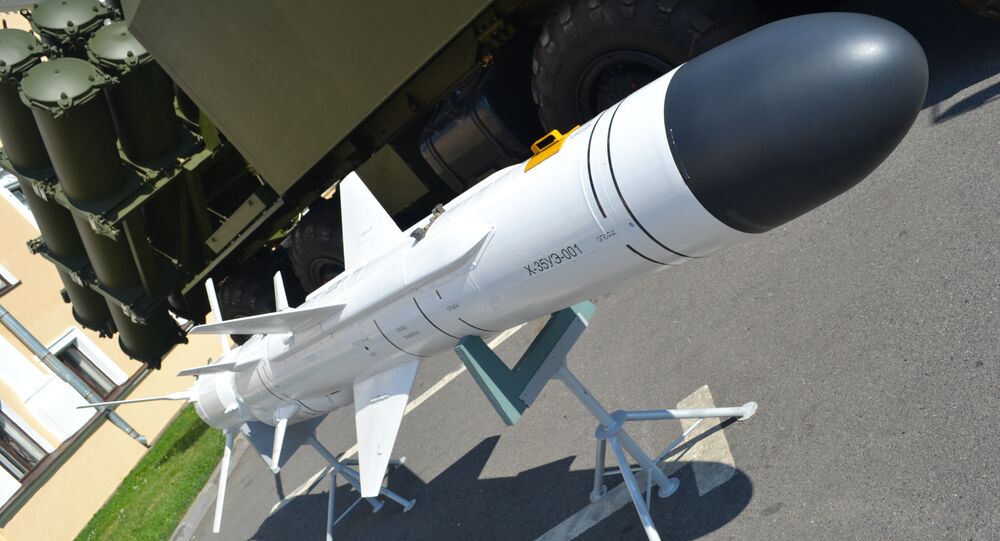 Earlier this month, Russian media reported that the Kh-35U, an upgrade of the Kh-35 jet-launched anti-ship cruise missile, has been incorporated into the Sukhoi T-50's array of armaments.

Speaking to Russia's Izvestia newspaper in an interview published on Friday, Nikolai Vasilyev, chief designer at Tactical Missiles Corporation, the company that designs the missiles, explained why Russia's prospective opponents fear the Kh-35, and how the Pentagon once tried to get their hands on them.

© Sputnik / Alexey Filippov
Russia's New 5th Generation Fighter Jet Just Turned Into a Deadly 'Ship Slayer'
Speaking about the Kh-35's widespread deployment in the Russian Navy, and its popularity in other countries, including Algeria, India, Iran and Vietnam, among others, Vasilyev said that the high regard for the missile comes down in part to its universality.

"The Kh-35E is Russia's first universalized missile which can be used from various types of carriers," the chief engineer noted. "Before it, the classical approach was for different weapons systems…(aircraft, helicopters, ships and coastal defense systems) to use specially-created missiles for each. The development of such weapons was a very costly affair. Therefore, in order to optimize spending, it was decided to create a universalized missile that could be used from airplanes, helicopters, ships, coastal defense complexes and, in case of urgent need, from submarines."

© Sputnik / Russian Defense Ministry
Admiral Grigorovich frigate launches Kalibr missiles on terrorist targets in Syria
Host photo agency
Top 5 Military Hardware Surprises of Moscow Victory Parade This Year (PHOTOS)
Today, Vasilyev noted, the main competitors to the Kh-35E include the American Harpoon and the French Exocet anti-ship missiles. Sweden and China have their own developments, the RBS-15 and the C-801, respectively, while Japan and North Korea are making an effort to develop them. "In general, any modern state engaged in maintaining the combat readiness of its military must have such weapons," the engineer said.

Asked to provide his assessment of how the Kh-35E would fare against the capabilities of these foreign analogues, Vasilyev explained that the fact that many sufficiently powerful countries without a domestic anti-ship missile program capability purchase the Russian weapons is a sign of their worth.

"Until recently, the American Harpoon was considered the top missile [in this class]. But the US supplied it only to its closest allies. For this reason, many countries went with 'budget' models, including Exocet and Chinese analogues like the C-801. I have often taken part in negotiations with foreign customers. For me as a developer, it's nice to hear when customers reach the conclusion that the Kh-35E is one of the best in its class. I can state with all responsibility that the Kh-35E and its Kh-35U modification not only hold their own against the foreign missiles, but in many respects are superior to them."

Asked to list the specific advantages of the Kh-35E, Vasilyev explained that first and foremost, it comes down to the weapon's immunity to enemy countermeasures.

"The biggest secret to any missile is its ability to resist enemy interference, that is, its resistance against jamming. Jamming includes active measures, when a missile's homing device is jammed with a powerful radio-electronic signal. There are also passive jamming measures – chaffing — including finely cut pieces of foil, fiberglass, etc. These are shot into the air, and the miniature radar homing device onboard the missile receives a huge number of signals, preventing it from finding its real target."

© AP Photo / Octav Ganea, Mediafax
Plasma Cannon: US Army’s Drone-Killing Laser Gun Wows Observers
"A missile's combat effectiveness is determined by two factors," Vasilyev said. "The first factor is the missile itself, and its ability to hit targets. For example, a single missile will be enough to destroy a missile boat displacing 500-1,500 tons. But to reach this vessel, it will be necessary to send eight missiles, for example. Seven of them will be either shot down, or blocked by the enemy's electronic warfare systems. Only one will pass through and find its target. The stronger a missile's jamming resistance, the less missiles are needed. The use of highly protected warheads allows us to halve the amount of missiles necessary – to send not eight missiles, but only four."

The second criterion for a missile's effectiveness is the relative cost ratio between the weapon and its target, the senior engineer explained. "The engineering solutions providing our missiles with countermeasures resistance capability are a state secret. But what I can tell you is that the knowhow used in the Kh-35E is notably higher than that of its foreign analogues, including Harpoon."

Vasilyev was able to confirm a long-standing rumor that the Pentagon had once sought to obtain the jamming resistance systems onboard the Kh-35 for use on their Harpoon missiles. "It's true; in the 1990s, there was a meeting between Radar MMS, the company producing the target-seeking equipment for the Kh-35E, and representatives from Lockheed. The American side asked for a sample homing head in order to conduct compliance testing between its characteristics and the requirements of the US Department of Defense, including tests on its jamming resistance. If tests confirmed the stated characteristics, they would have been ready to put them on the Harpoon missile. But we did not give them such permission."

The missile designer recalled that "some time after these negotiations, the lead designer of the Kh-35's target-seeking equipment was killed on a train going from Moscow to St. Petersburg. Then, the main programmer – the specialist who had developed the special software for the system's information processing system, disappeared without a trace. The loss of the main visionaries behind a modernized target-seeking system set us back about four years."

© Sputnik / Michail Fomichev
Space Wars? US Intelligence Chief Says Moscow Seeking 'Qualitative Parity' With Washington
Asked to comment on the current state of US designs in the field, Vasilyev quipped that "it would be more appropriate to address this question to American specialists…We only know that the homing head of the Harpoon emits a very high-powered signal –according to our data, over 6kW, as it goes into active mode along the final trajectory. But in the present stage of radar development, this high power level is considered an outdated trend. We, on the contrary, are moving along the path of reducing signal strength, simultaneously solving the tasks of increased stealth and resistance to jamming."

Asked about the prospective use of the Tactical Missile Corporation systems aboard the latest ship designs for the Navy, such as the Project 23550 ice-class patrol ship, the designer explained that Russia is currently undergoing a paradigm shift in its weapons development model.

"There is a modern concept, which has been under active development over the last three to five years," Vasilyev noted. "This is the construction of universal platforms. Earlier, ships were developed as unique strike systems. Only one type of system could be installed aboard a ship — only the Uran-E [shipborne missile system] or only the Yakhont [supersonic anti-ship cruise missile], for example. As a result, the ship going into battle would be capable of solving only one combat task."

"But in recent years, the concept of narrow specialization for ships that carry missile weapons is changing," the engineer explained. The current model is more of a grab bag approach.

"The concept behind such ships is simple. We build ship platforms, which have navigational equipment for navigational purposes, defensive armament, [etc.]. In the stern of the ship is a free slot, where it is possible to install several easily removable modules. These can contain any type of weapon system — anti-submarine, ballistic attack, mine warfare, for example…With this approach, it's possible to create ship 'carriers' which aren't tied down to a specific combat mission and, depending on the situation, can be fitted with varying combat modules."

© Sputnik / Ilya Bogachev
Russia Successfully Tests Ship-Borne Ka-52K Helicopter During Admiral Kuznetsov Op in Mediterranean
Vasilyev emphasized that the new ships' systems must be organized according to open architecture principles, using standard connectors and a standard digital interface allowing them to interface with the power supply and informational interfaces of the interchangeable combat modules.

Today, the expert stressed, it is necessary for the Navy to make an effort to train 'universal soldier' crew, "where any crewmember is capable of carrying out not only their immediate duties, but also, if necessary, to use weapons. The degree of automation on our systems is very high, but it is necessary to overcome the narrowly specialized division in education" (which presently exists).