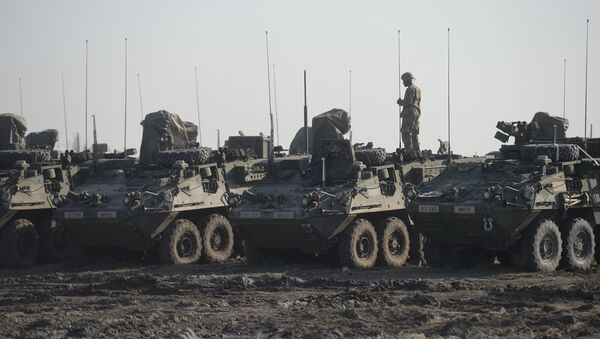 © AP Photo / Octav Ganea, Mediafax
Subscribe
A recent US Army exercise to test various anti-drone weapons tried out customized .50 caliber firearms, acoustic sensors to pinpoint the drone’s location and jeep-mounted jammer devices meant to knock drones out of the sky. But the clear winner from the exercise was a literal laser gun, mounted on a Stryker combat vehicle.

The prototype laser was so effective that the operator lost count of how many drones he shot down with it. "I took down, I want to say, 12?" Staff Sgt. Eric Davis told reporters. "It was extremely effective."

The laser in question is the Boeing-General Dynamics Mobile Expeditionary High-Energy Laser (MEHEL) 2 prototype, a 5 kilowatt (kw) laser. The idea is reasonably simple: the device fires a laser that has been filled with an electrical current, much in the same way a taser wire works. As the laser travels through the air, it superheats and ionizes the air around it, forming a plasma channel. When the laser hits a target, it simultaneously strikes it with an intense electric shock and debilitating heat.

Being a laser, the MEHEL 2's beam travels at the speed of light. This makes lasers the perfect weapon to counter aerial weapons such as drones or even missiles (although that would take a larger beam).

During the Army's Maneuver Fires Integrated Experiment (MFIX), the MEHEL 2 got its chance to shine. Operating the weapon proved difficult at first, as the test involved real drones and simulated artillery strikes exploding around the operators. Part of the experiment was to see whether the operators could handle the complex system without becoming overwhelmed.

Evidently, they succeeded. "The crew on the Stryker had never worked together. … We didn't know each other," said Davis. "[But] all the systems were pretty easy to use, and after 15-20 minutes, I was able to program all the different types of equipment."

Missile Defense Systems Could be Made Obsolete by Small, Powerful Laser Weapons

The laser is mounted on the IAV Stryker, an armored vehicle that is faster and more maneuverable than an M1 tank but more heavily armed and robust than a Humvee. One of the Stryker's strengths is how easily it can be modified with different armaments, allowing for tasks as diverse as mobile artillery launches, engineer transportation, and chemical weapon reconnaissance.

These particular Strykers are called Counter-UAS Mobile Integrated Capability vehicles, or CMICs. Two prototypes equipped with the 2kw MEHEL 1 are currently in Europe with the 2nd Cavalry Regiment, deployed in eastern Poland about 100 miles from the Russian border. The Russian military has made greater use of drones to act as spotters for artillery strikes.

"In Iraq and Afghanistan, we were kind of the only ones that had Unmanned Aerial Systems [UAS or UAVs] and they pretty much flew in uncontested airspace," said General David Perkins in October 2015. Now, he said, Russia is also using the technology effectively.

The Stryker, in particular, is known for its vulnerability to artillery strikes, as its modest armor is not sufficient to protect it or its operators.

With the success of the MEHEL 2 during the MFIX, the Army will test a 10kw variant in November. Such a laser would be heavier, but have more power and more range. If that goes well, according to Fires Battle Lab Director John Haithcock, the 10kw laser-mounted Stryker will be used in a mock battle during the Joint Warfighting Assessment.