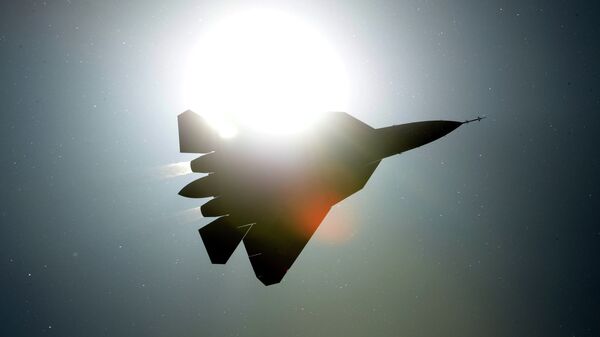 Russia's new Sukhoi T-50 PAK-FA fighter jet has just been given another ability – the means to destroy surface warships. Sputnik spoke to military expert Andrei Golovatyuk to find out whether it's now appropriate to add 'ship slayer' to the fifth-generation aircraft's list of capabilities.

On Wednesday, Russia's Izvestia newspaper reported that the Kh-35UE tactical cruise missile, an upgrade of the Kh-35 jet-launched subsonic anti-ship missile, has been incorporated into the Sukhoi T-50's array of potential armaments.

The weapon, capable of targeting and destroying everything from landing craft to aircraft carriers, as well as ground targets, including hard points, warehouses and even mobile military equipment, is able to bypass missile defense interceptor systems, as well as advanced electronic jamming, thanks to its dual-band active/passing homing guidance system.

Flying High: Russia's T-50 Super Jet Preparing to Soar With Next-Gen Engine
It is the ability to target an array of ground-based targets, along with a shorter intake and folding wings, which distinguish the Kh-35EU from its predecessor.

Experts speaking to Izvestia said that the Kh-35UE's successful incorporation into the T-50's arsenal effectively turns it into a 'multifunctional fighting machine' whose characteristics go far beyond those of a mere fighter aircraft. 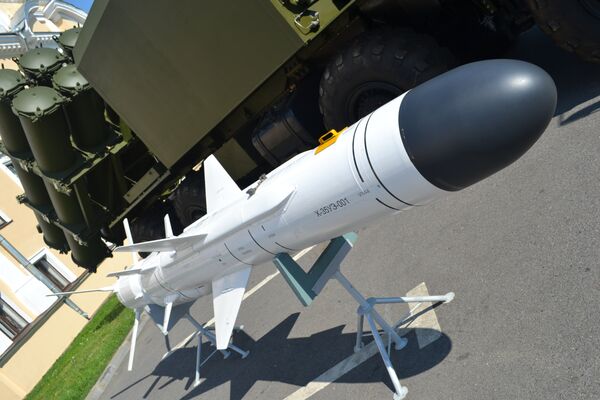 Nikolai Vasilyev, chief designer of the Kh-35UE at the Korolev-based Tactical Missiles Corporation, told Izvestia that testing of the cruise missile on the T-50 has already been completed, with the weapon proving fully compatible with the plane's onboard equipment. When deployed, the cruise missile will be mounted underneath the T-50's wings.

PAK DA: Russian Defense Ministry Reveals When New Stealth Bomber Will Fly
Vasilyev also reminded the newspaper that the Kh-35UE has demonstrated itself effectively on the carrier-based variants of the MiG-29K and MiG-29KUBR fighter planes, and on the Ka-52 attack helicopter.

Asked to comment on this development, Andrei Golovatyuk, a retired colonel and respected Russian military analyst, told Radio Sputnik that he found it unsurprising that the Kh-35UE, a universal cruise missile, has found its way into the T-50's arsenal.

The military analyst recalled that Russia's fifth-generation fighter uses the latest stealth and avionics technology, "and, accordingly, more modern armaments, both those that exist and those being developed by our engineers." Overall, "this is an airplane that's entering a new, fundamentally more advanced level," he said.

"As for the [Kh-35UE], it is simply unique," Golovatyuk added. For one thing, "this is a universal cruise missile, and can be placed on a variety of platforms –from ships, to airplanes, to helicopters, to coastal defense missile systems. In other words, the T-50 is considered as one of most promising platforms for this missile."

Russia's New Supercarrier Isn't Being Built to Engage in Muscle-Flexing With US
"What is the special know-how of this missile in combination with the T-50?" the analyst asked. "They can enter the target's zone of destruction without entering the perspective enemy's zone of air defense. The missiles are used according to the principle that upon launch, the missile instantly finds its target and independently directs itself toward it."

"In other words, the methodology here is 'launch it and forget about it'; the missile itself finds its target. Therefore the name 'slayer of ships' is in this case fully justified," Golovatyuk concluded.

Planned to be introduced into service with the Aerospace Defense Forces next year, the T-50, officially designated as a stealth air superiority fighter, is meant to eventually replace the Sukhoi Su-27 fourth-generation multirole fighter, in service with the Soviet and Russian militaries since the mid-1980s.

F-35s on Russia's Borders: How Moscow Will Respond to Washington's 'Message'
Since its first flight in the early 2010s, the T-50, part of the Prospective Airborne Complex of Frontline Aviation (PAK-FA) program, has receiving a vast series of upgrades to its avionics, stealth and armaments. On Wednesday, United Aircraft Corporation General Designer Sergei Korotkov confirmed that engineers are busy working on the creation of a next-generation engine for the plane, one that boasts increased thrust and fuel efficiency, lower cost, and improved reliability compared to the existing engine.