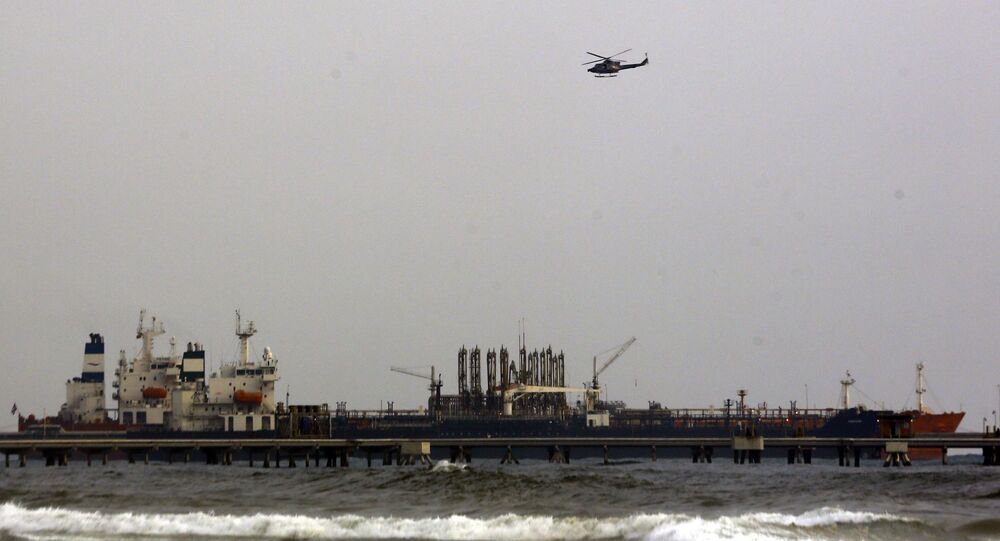 The Lebanese political party and militant group is known to enjoy close ties with the Islamic Republic, with Iranian officials regularly listing it as part of a regional "Axis of Resistance" against the US and Israel. Hezbollah fighters and Iran's Quds Force teamed up to fight an array of jihadist extremists in war-torn Syria over the past decade.

Hezbollah is prepared to negotiate the shipment of fuel from Iran to be paid for in Lebanese pounds if the current fuel shortages plaguing Beirut continue and the Lebanese government fails to address the crisis, Secretary-General Hassan Nasrallah has said.

In an address to Al-Manar TV, a pro-Hezbollah television station, on Tuesday, Nasrallah called on authorities to make a "bold decision" and "not to comply" with US directives regarding oil and fuel, and to "bring [fuel supplies] from Iran using Lebanese pounds."

"We, Hezbollah, can go to Iran and negotiate with the Iranian government and buy shipments of fuel," he said.

Nasrallah went on to comment on the ongoing political crisis in neighbouring Israel, warning that the situation may push the current government to "commit a folly" against Palestinians or "the entire Muslim World" in Jerusalem.

The politician also thanked supporters for their concerns about his health following his speech last month, during which he reportedly showed signs of pneumonia, saying that he has recovered and reiterating his hope to live to be able to pray in Jerusalem's Al-Aqsa Mosque some day.

© CC BY-SA 4.0 / Sealy j / U.S. Treasury Building and Albert Gallatin Statue
US Imposes Hezbollah-Related Sanctions on 7 Individuals in Lebanon
Nasrallah's comments come one day after Hassan Baghdadi, a member of Hezbollah's central council, told Israel not to make threats against Lebanon, and warned that if Tel Aviv started a new war with the militant group, they would "see the fire of hell as they have never imagined even in their dreams." The comments followed remarks by Israeli Defence Minister Benny Gantz late last month that all of Lebanon would "tremble" if Hezbollah dared attack Israel.

Lebanon and Israel have no diplomatic relations to speak of, and the Jewish State's relationship with Hezbollah is the worst among all among the political forces of its northern neighbour. The Israeli military and Hezbollah have regularly engaged in skirmishes along the border, and fought one another into a standstill in a major war in 2006.

Lebanon is presently in the throes of a severe economic crisis which began in August 2019 and was exacerbated by the coronavirus pandemic and the 2020 Beirut port explosion. Last week, the World Bank warned that the current downturn could become one of the three worst experienced globally since the 19th century.

© REUTERS / AZIZ TAHER
Lebanese Telecom Giant Not Ruling Out Cutting Internet at Off-Peak Hours Due to Blackouts
On Monday, the general director of Lebanon's state-owned telecom authority Ogero told Sputnik that the operator may have to switch the internet connection off nationwide during peak hours if rolling blackouts caused by major fuel shortages intensify.

A Lebanese appeal to Iran for assistance with fuel deliveries wouldn't be unique. In recent years, Iran has helped several allies, including Syria and Venezuela, with emergency fuel deliveries amid Western sanctions pressure, despite facing difficulties itself. The assistance to Syria has even continued notwithstanding the string of alleged Israeli sabotage attacks against Iranian tankers making their way to the eastern Mediterranean.