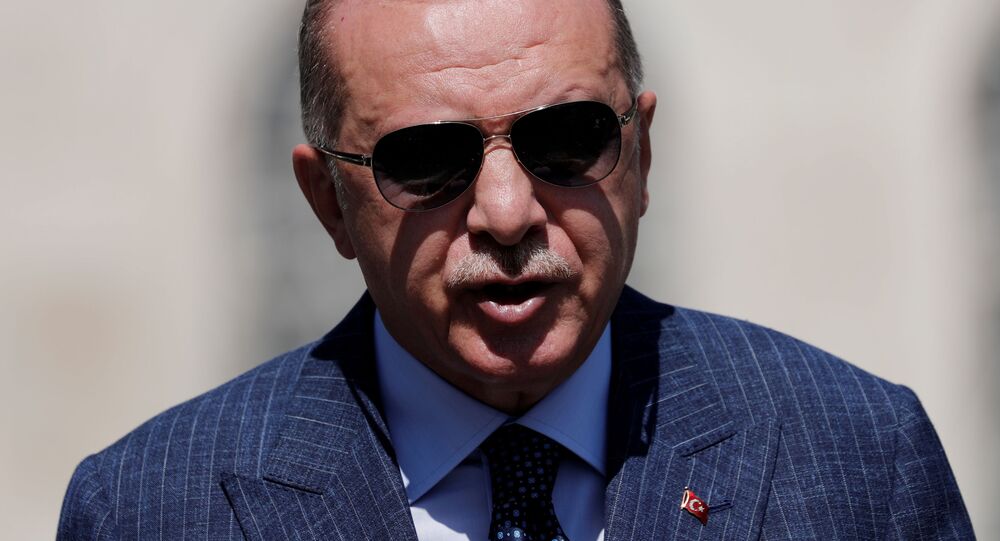 Over the past several months, relations between the French and Turkish presidents have been strained because of a collision of interests in the Eastern Mediterranean, and deteriorated further after Macron's statement against radical Islam.

"We see Macron's anti-Islamic insults and racist terrorism as a threat to our national security and this is what we are guided by when we draft our plans", Erdogan said in an address he delivered in Ankara, adding that Turkey will take responsive measures, if necessary.

Erdogan also called on the international community to "protect Muslims in France who are persecuted for their faith" and stop Macron's campaign of "hatred".

"[France is] indeed part of Nazism. The person who is leading France and who needs psychiatric treatment has started encouraging attacks on Muslims", Erdogan went on to say.

In the meantime, several Arab companies have removed French products from supermarkets in response to Macron’s statements on Islam.

Qatari shops and restaurants, including national retail giant Al Meera, have announced a boycott of French goods in protest against the comments.

After the French president's speech, hashtags such as the #BoycottFrenchProducts in English and the Arabic #NeverTheProphet trended all over the world, especially in Kuwait, Qatar, Palestine, Egypt, Algeria, Jordan, Saudi Arabia and Turkey.

France, for its part, has no intention to restrict imports of Turkish goods following President Recep Tayyip Erdogan’s calls for a boycott of its products, the minister for foreign trade and economic attractiveness told the RTL radio.

"This [a possible boycott of Turkish goods by France] is not on the agenda at all ... We will not act the way Turkey does today," Franck Riester said.

The Turkish president's announcement comes after Paris denounced Ankara’s strong-worded response to Macron's statement against radical Islam and recalled its ambassador to Turkey for consultations.

Before this, Erdogan said the French president offended millions of French Muslim citizens and "needed mental treatment". He continued to say that "hostility to Islam means hostility to Turkey".

German Foreign Minister Heiko Maas has expressed solidarity with Paris in the fight against radical Islam, criticising Erdogan's denouncement of what Macron said.

"We stand in solidarity with France, both with regard to President Erdogan's personal attacks against President Macron - which I consider to be a new escalation and which are absolutely unacceptable - as well as with regard to the fight against Islamist extremists, especially after the horrific terrorist attack [in Paris]", Maas said at a joint press conference with IAEA Director-General Rafael Grossi.

​During his speech at a ceremony commemorating French history teacher Samuel Paty, who was brutally murdered by a radicalised teen, Macron urged to "free Islam in France from the foreign influence and strengthen control on the mosques' funding". Macron also stressed that France would continue to defend freedom of speech and step up battle against radical Islam.

On 16 October, Paty was beheaded by an 18-year-old in the outskirts of Paris after he showed his pupils cartoons of the prophet Mohammad as part of a freedom of speech lesson. The killer, a French citizen of Chechen descent, was subsequently shot dead by police.

The attack triggered national and international revulsion, with French mass media republishing the cartoons in commemoration of the murdered teacher and victim of radical Islamism, and many of the media outlets consequently getting death threats over the matter.