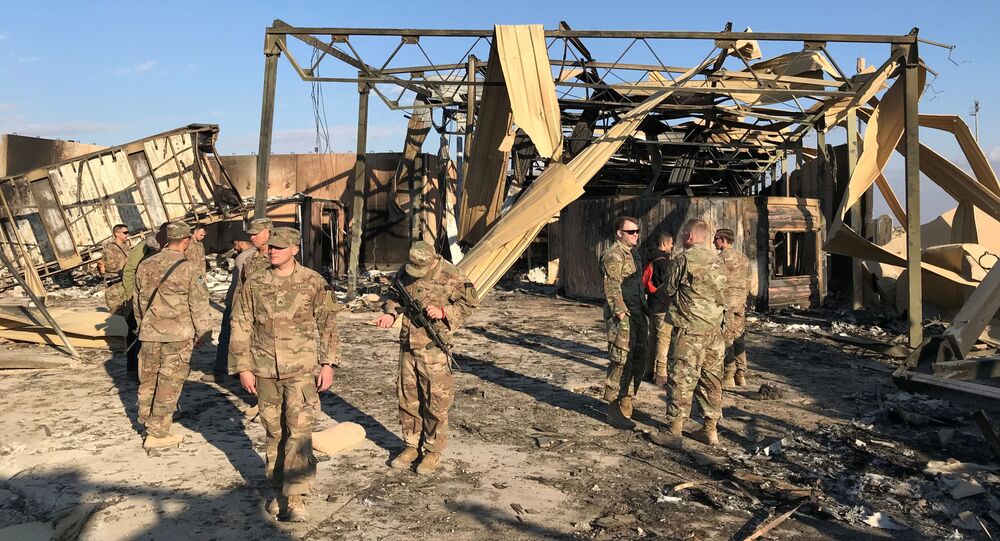 Within the past several months, US bases in Iraq have been targeted in a number of rocket attacks. The situation reportedly escalated after 3 January, after a US airstrike assassinated top Iranian General Qasem Soleimani and several senior members of the Iraqi Shia militia near the Baghdad International Airport.

Following the targeted killings, Iran responded with limited strikes on US bases with prior warning, which resulted in no deaths or injuries, according to earlier statements made by the US military.

On Monday, the US Department of Defence (DoD) said that at least 109 US service members have been diagnosed with mild traumatic brain injury (TBI) due to Iranian attacks. In a statement, the DoD said that 76 of those service members had been returned to duty.

"As of today, 109 US service members have been diagnosed with mild traumatic brain injury, or mTBI, an increase of 45 since the previous report", the statement said.

​The assassination of Soleimani - at the behest of US President Donald Trump - has exacerbated the crisis between Washington and Tehran and triggered widespread fears of an open conflict between the two nations.

Trump claimed he ordered the strike because Soleimani and Abu Mahdi al-Muhandis, the deputy head of the Iran-backed Iraqi Popular Mobilization Forces, were allegedly plotting "imminent" attacks against US assets abroad.

On 8 January, Iran launched 16 projectiles at the Erbil and Al Asad airbases in Iraq, following a US airstrike that killed the top Iranian general Soleimani as well as at least 8 others.

Following the assassination of Soleimani, the Iraqi parliament voted to expel all foreign forces from the country, but no action has been taken to rid the nation of foreign military presence. Baghdad has since kicked off a new type of cooperation with the coalition to reduce its activities to consultation, arms deliveries and training, as well as to limit its freedom of movement on Iraqi soil.

The Iraqi military has, however, announced that they have resumed joint anti-Daesh* operations with the coalition and will continue until a new cooperation agreement is reached.