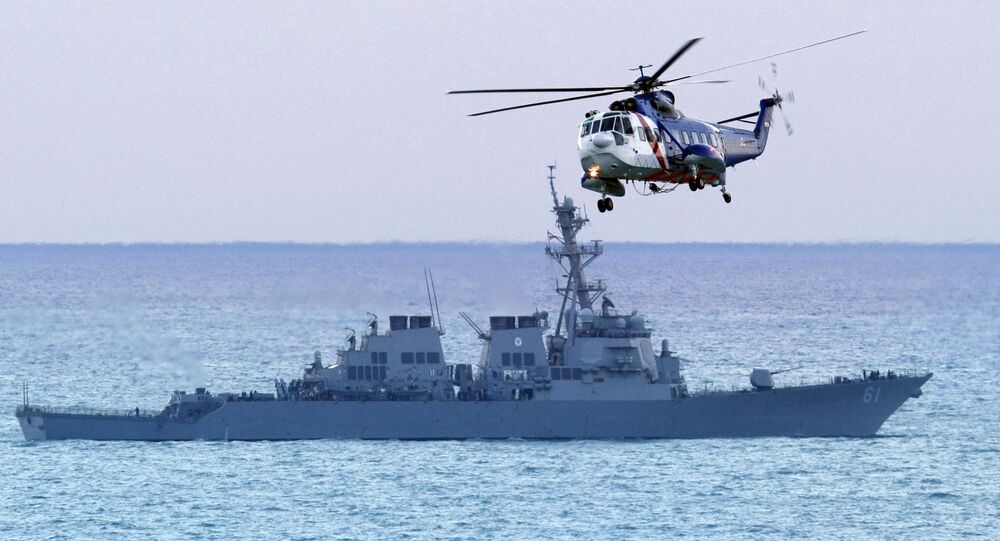 Earlier, following heavy clashes between Hezbollah and Israel in southern Lebanon, the country's prime minister called on the US and France to intervene to soothe tensions.

The US guided missile destroyer USS Ramage has docked at the Lebanese capital, becoming the first US warship to do so since 1984.

According to the Twitter account of the US Embassy in Beirut, the ship’s arrival serves as “a symbol of the enduring partnership between the US and Lebanon to ensure security and stability in the eastern Mediterranean.”

The #USSRamage, a destroyer class vessel, entered #Beirut port on September 14 as a symbol of the enduring partnership between the U.S. 🇺🇸 and #Lebanon 🇱🇧 to ensure security and stability in the eastern Mediterranean.@USNavy pic.twitter.com/2l3Y5LT9S5

Lebanese press tour the #USSRamage, which docked in #Beirut on September 14 on a goodwill visit to showcase the strong U.S.-#Lebanon relationship 🇺🇸🇱🇧 and a commitment to freedom of navigation.@USNavy pic.twitter.com/PZ0Gvgi1AD

Later, the Embassy called the docking a “goodwill visit” aimed at “showcasing” the “strong US-Lebanon relationship”.

US Ambassador to Lebanon Elizabeth Richard called the destroyer’s visit a “security reminder,” meant to demonstrate that “the US Navy is not far away,” and will continue to patrol the area.

According to Richard, the US-Lebanon partnership was not limited to military cooperation, but economic aid as well, with the US “committed to help the Lebanese people through this period of economic hardship, and to supporting the Lebanese institutions that defend Lebanese sovereignty.”

Lebanon has been hit hard by several regional crisis, including the estimated 1.5 million plus Syrian refugees which the country has hosted in the wake of the Western-backed civil war in Syria, and the conflict between Hezbollah, a local political and militant movement, and Israel, a major US ally.

On 1 September, the Israeli military launched massed mortar, artillery and air strikes against multiple targets in southern Lebanon, responding to a Hezbollah anti-tank missile barrage targeting Israeli Defence Forces positions along the disputed border area. The back and forth attacks followed a series of alleged Israeli drone and airstrikes on Hezbollah positions in Lebanon late last month. Hezbollah and Lebanon accused the Israelis of dropping firebombs on a Lebanese grove near the border, flying small drones into Beirut to bomb a Hezbollah media office, and attacking a location on the Israel-Lebanon border thought to be a transit point for militants.

Last week, in the wake of the attacks, which became the worst clashes between Israel and Hezbollah in years, Lebanese President Michel Aoun warned that Israel would "bear the consequences’"of any renewed “aggression against Lebanon,” and accused Israel of violating the August 2006 UN Security Council resolution which put an end to the 2006 Israel-Lebanon war.

Later, in a veiled response, Israeli Prime Minister Benjamin Netanyahu accused Iran of building up proxies across the Middle East, including in Lebanon, Gaza, Iraq and Syria, and promised that Israel would continue to do everything it felt was necessary to prevent its adversaries from “getting game-changing weapons” which could threaten Israeli security.

Following the attacks, Lebanese Prime Minister Saad Hariri held talks with US Secretary of State Mike Pompeo and French Presidential Advisor Emmanuel Bonne, asking the US, France and other countries to intervene to counter the escalation on Lebanon’s southern border.

The US and France withdrew their permanent military presence from Lebanon in 1984, following the 23 October terrorist truck bombings on barracks containing US and French forces in Beirut. The attacks, which killed 241 Marines and 58 French paratroopers, were organised by a group called the Islamic Jihad Organisation. The US later claimed Iranian involvement and froze hundreds of millions of dollars in Iranian assets, with Iran vocally denying the allegations.