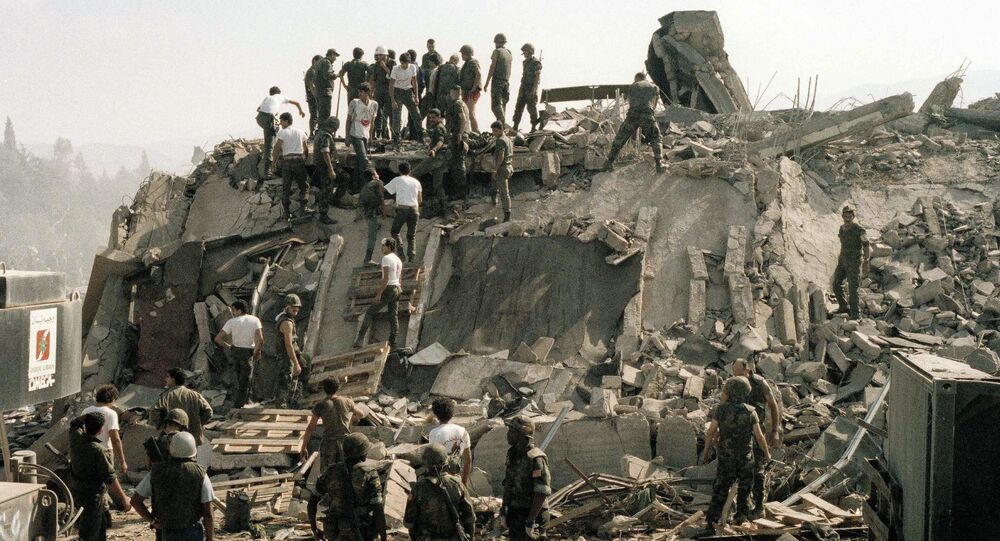 1983 US Barracks Bombing in Beirut: Will Iran Ever Get Its Frozen Billions Back?

Tuesday marked the 35th anniversary of the October 23, 1983 terrorist truck bombings of buildings containing US and French forces in Beirut, Lebanon. In the attacks' aftermath, Washington accused Tehran of involvement, froze nearly $2 billion in Iranian assets, and decided to seize and appropriate these funds in 2016.

As a result of the barracks blast, 241 US Marines and 58 French paratroopers were killed, along with 6 Lebanese civilians. A group called Islamic Jihad Organization claimed responsibility for the blast, but Israeli and US officials have claimed Iranian involvement.

In 2016, the US Supreme Court ordered Iranian assets frozen in US banks to be paid out to the families of the US servicemen killed in the blast. Iran decried the decision, calling it "theft," and took its case to the International Court of Justice. Earlier this month, US lawyers urged the ICJ to dismiss the Iranian suit, arguing that its appeal was "legally flawed."

© Sputnik / Sergey Mamontov
US Breaks International Law by Deciding to Seize Iran's Assets - Lawyer
Speaking to Sputnik Persian about the anniversary of the blast, and US authorities' decision to seize and appropriate Iranian assets, Dr. Seyed Hadi Afgahi, renowned expert on Middle East affairs and former diplomat at Iran's embassy in Lebanon, said Tehran was unlikely to get its money back.

Commenting on the US claims against Iran, Afgahi said that the Beirut bombing was not the first time that the US has baselessly accused Iran of carrying out actions directed against US interests, citizens, military and diplomatic personnel, and certainly wouldn't be the last.

"The US is filing lawsuits against Iran, but is forming these courts themselves, and making the rulings themselves. Where else in the world can one see a situation where the investigation is carried out by the same people who file the lawsuit, and the ruling is made by the same people,  as well?" the observer asked, pointed to the multiple suits filed in US courts over the years accusing Iran of involvement in various terror acts.

© AP Photo / Peter Dejong
Washington Tells UN Court to Scrap Tehran's Lawsuit on Frozen Assets
"Recently, for example, the International Court of Justice ruled in Iran's favor and demanded that the US lift some of its sanctions against Iran. The response from the US was that this decision means nothing to them. This is Washington's logic at its core – the logic of unilateral claims," Afgahi added.

As far as the Beirut bombings case is concerned, the former diplomat suggested that whatever Tehran does in international courts, it can't force Washington to adhere to the courts' decisions. "The International Court of Justice in the Hague is an organ controlled by the UN, but the US simply refuses to comply with its decisions," he lamented.

Regarding the real perpetrators standing behind the 1983 blast, Afgahi said that it's necessary to take a broader view, accounting for US actions, and not just those of the terrorists. "The Americans were the ones who attacked the people of Lebanon, killed them, bombed them, with their ships regularly bombing Beirut's coast. They placed a base in the city, seizing buildings, landing their forces without the permission of the Lebanese authorities," the observer recalled. "This is the same thing that they're doing today – invading, killing and bombing," he argued.

Ultimately, Afgahi believes that in the present circumstances, Iran will be unlikely to achieve justice and the return of its assets, particularly after the unilateral US withdrawal from the Joint Comprehensive Plan of Action nuclear deal and the introduction of new, aggressive sanctions against Tehran.