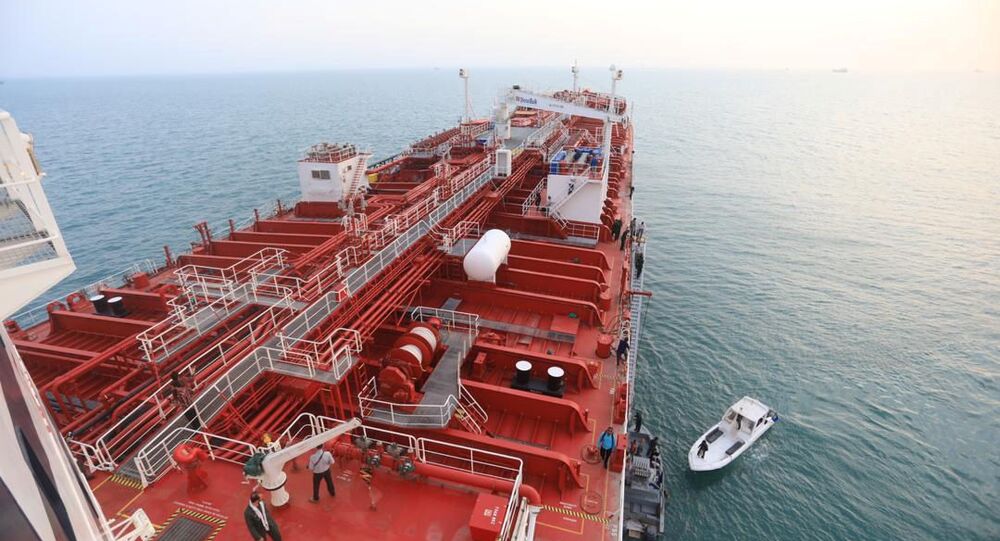 This was preceded by video of an Iranian flag being flown over the deck of the captured UK oil tanker and the first photo from inside the vessel where part of the vessel's crew was seen sitting on the floor.

Footage has been released by Iranian state TV that shows crew members on board the British-flagged oil tanker Stena Impero which was seized by Tehran in the Strait of Hormuz on 19 July.

The footage shows some crew members working in the kitchen, while others are seen looking on what appears to be an Iranian official.

The clip comes after a video showing the Iranian flag flying over the Stena Impero's deck and a photo from inside the tanker were released.

Later on Monday, UK Prime Minister Theresa May is due to chair an emergency security meeting to consider London’s reaction to the tanker’s seizure by Iran’s Revolutionary Guard Corps (IRGC).

The speaker of the Iranian parliament Ali Larijani told a parliament session that "the Revolutionary Guards responded to Britain’s hijacking of the Iranian tanker" Grace 1 in the Strait of Gibraltar on 4 June, in what Tehran described as an act of "pure piracy".

As far as the Stena Impero's 23-strong crew is concerned,  Tehran stressed that the length of their detention is linked to their readiness to cooperate with Iranian authorities.

Earlier, Allahmorad Afifipour , the head of the Ports and Maritime Organisation of Iran in Hormozgan Province told state TV that “all 23 crew members aboard the [Stena Impero] ship are safe and in good health in Bandar Abbas port”.

The developments came after a number of Iranian speedboats approached another British oil tanker in the Gulf on 10 July, but were warned off by a Royal Navy ship.

Earlier, Washington blamed Tehran for being behind several attacks on foreign tankers. Iran rejected the accusations. US Secretary of State Mike Pompeo specifically emphasised that it “falls to” Britain to protect its ships in the Persian Gulf.