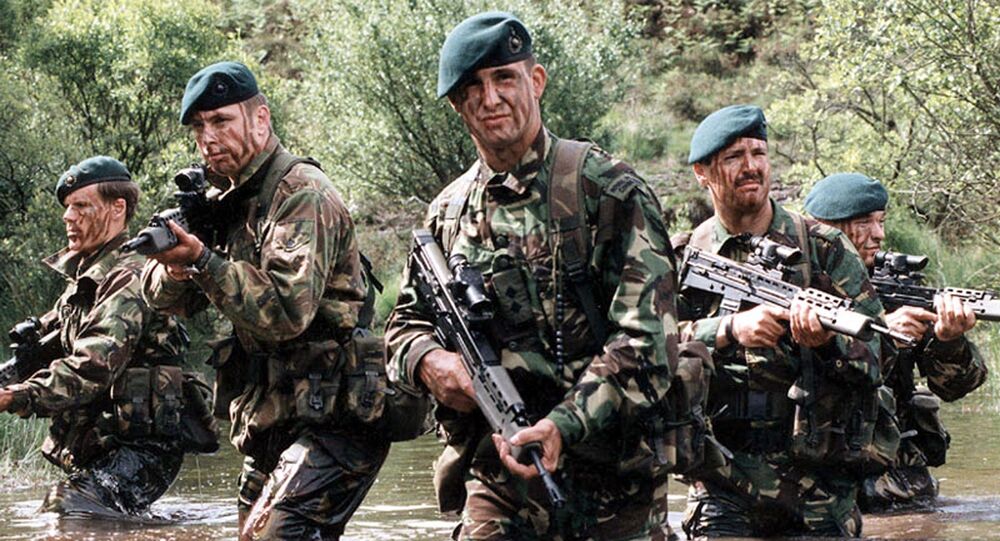 The USS Abraham Lincoln aircraft carrier strike group earlier arrived for patrols in the Arabian Sea, with the US reportedly ready to deploy as many as 120,000 troops to the Middle East to counter alleged threats from Tehran.

British Special Forces have flown to the Middle East in the framework of a top secret mission to rebuff possible Iranian attacks on merchant ships, according to The Sun.

Members of the elite Special Boat Service are reported to have joined UK registered oil tankers heading towards the Persian Gulf, subsequently to be tasked with monitoring Iranian military activity in the vicinity of Qesham Island, home to the country's naval gunboats, the paper reports.

© REUTERS / Jonathan Ernst
Trump Says Interested Only in Economic 'Invasions' Amid Escalation With Iran
Once the two SBS crews have passed through the Strait of Hormuz, reports claim Royal Navy Merlin helicopters operating out of Oman will airlift them off the vessels.

The UK Ministry of Defence declined to respond when contacted by The Sun Online, with a spokesman stating they never comment about the Special Forces.

The US has already deployed the aircraft carrier and B-52 bombers to the Persian Gulf to counter alleged threats from Tehran, with the US planning to deploy as many as 120,000 troops to the Middle East should Iran attack American forces, a report claimed this week.

© AP Photo / Evan Vucci
Trump: 'If Iran Wants to Fight, That Will Be the Official End of Iran'
However, US President Donald Trump is said to be increasingly favouring direct talk with Tehran as the best way forward, in a bid to comply with his long-standing pledge to withdraw the US from costly foreign wars, reports Washington Post.

Trump had campaigned on avoiding overseas conflicts, but also on taking a tougher line on Iran.

The Washington Post quoted a senior administration official as saying the US President is growing frustrated with what he sees as warlike planning generated by hawkish advisers.

The paper cited several US officials saying Donald Trump prefers a diplomatic approach to resolving mounting tensions in the Middle East and wants to speak directly with Iran's leaders.

“He is not comfortable with all this “regime change” talk,” which to his ears echoes the discussion of removing Iraqi President Saddam Hussein before the 2003 US invasion," the officials were reported as saying.

In a Fox News interview on Sunday, US President Donald Trump said that the only sphere where he wants to "invade" is actually the economy, thereby downplaying fears of a conflict with Iran.

READ MORE: Ex-CIA Director Warns Iran to Be ‘Very Careful’ Amid Rising Tensions with US

He reiterated that he did not seek a war with Tehran, noting that the main thing he wanted was "not to let Iran have nuclear weapons".

"I am not somebody who wants to go into war because war kills (the) economy, kills people most importantly," he added.

However, Trump is willing to respond with force should there be American deaths or a dramatic escalation, added the official.

© AP Photo / Vahid Salemi
Iran's Revolutionary Guards' Commander Compares US to World Trade Center Building in 9/11 Jibe
Iranian Foreign Minister Mohammad Javad Zarif has said he does not believe a war will break out in the region amid concerns over rising tensions with the US.

Speaking with the Islamic Republic News Agency (IRNA) at the end of a visit to China on Saturday, he added that Tehran did not want a war, but that no country had the "idea or illusion that it can confront Iran".

US-Iranian tensions flared up last year when Washington unilaterally withdrew from the 2015 nuclear deal and reinstated crippling sanctions against the country.

On 8 May 2019, Iran announced its decision to partially discontinue its obligations under the deal.

The United States, in turn, stepped up its military presence in the Middle East in what White House National Security Adviser John Bolton has called "a clear and unmistakable message to the Iranian regime", sending a carrier strike group, Patriot missiles, B-52 bombers and F-15 fighters to the area, according to the Pentagon.

Trump Says Interested Only in Economic 'Invasions' Amid Escalation With Iran