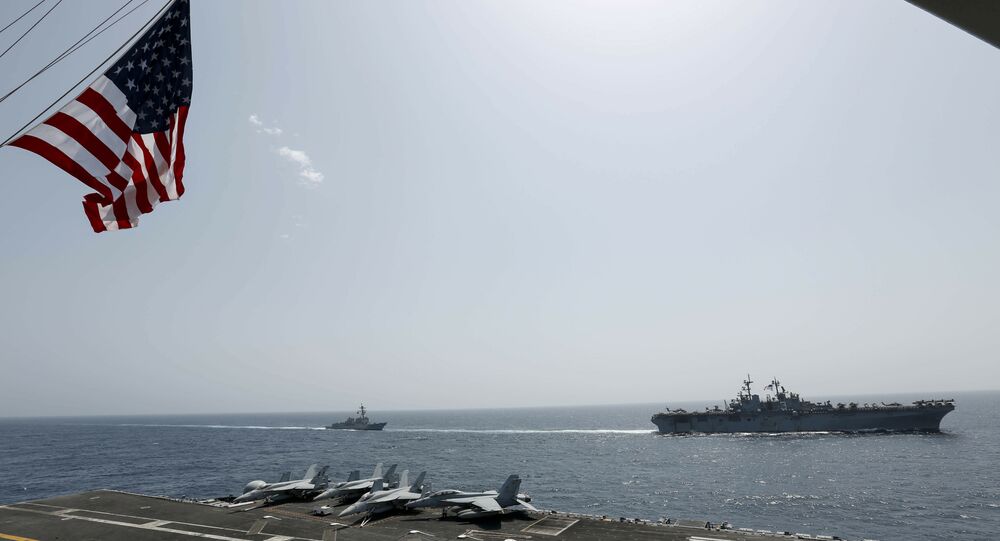 The US Navy's announcement about the drills came on the heels of reports that the UK had sent special forces to the Middle East and several Arab countries of the Gulf began "enhanced security patrols" in the area.

US warships have carried out exercises in the Arabian Sea as part of efforts to build up preparedness for what Washington calls an Iranian threat.

The US Navy confirmed on Sunday that it had carried out exercises and training on 17-18 May with aircraft carrier USS Abraham Lincoln and amphibious assault ship USS Kearsage in coordination with the Marine Corps.

Also taking part in exercises were the 22nd Marine Expeditionary Unit and Amphibious Squadron Six, both deployed to and operating under the US Navy's Bahrain-based 5th Fleet, which is currently deployed in the Persian Gulf.

The drills included air-to-air training, steaming in formation and maneuvering, according to the statement. They were aimed towards "increasing our lethality and agility to respond to threats, and deterring destabilising actions in this important region", said Rear Adm. John Wade, who is in charge of Carrier Strike Group 12.

In a separate statement on Sunday, the Fifth Fleet announced that the Gulf Cooperation Council (GCC), which includes all Arab nations of the Persian Gulf except Iraq, began "enhanced security patrols" in the international waters of the Arabian Gulf area on Saturday.

Meanwhile, reports surfaced in UK media that the country had secretly flown special forces to the region to repel potential Iranian attacks on British commercial vessels in the Persian Gulf.

It follows the US' deployment of an aircraft carrier strike group and a fleet of bombers near Iran earlier this month in response to a presumed but yet-unspecified threat from Iran.

Relations between Tehran and Washington continue to deteriorate as the US is ratcheting up economic pressure on Iran, trying to force it into negotiating a new nuclear agreement. Last year, Donald Trump pulled the US out of the 2015 nuclear deal and re-instated crippling economic sanctions on Iran, saying that the Obama-era pact did not prevent the country from pursuing nuclear weapons.

Against the backdrop of tensions with the US, Iran was accused of being behind two notorious incidents in the region. A Saudi prince claimed that Tehran had ordered a recent attack on the kingdom's oil facilities, which was allegedly carried out by Yemeni Houthi rebels.

Moreover, last week, a group of commercial ships, which included two Saudi oil tankers, a UAE- and a Norwegian-flagged vessel, were targeted in an apparent "act of sabotage" off the Emirati coast.

US officials blamed the explosions, which caused no injuries or casualties but dealt significant damage to the tankers' structure, on "Iranian or Iranian-backed proxies". Tehran has denied shouldering any responsibility for attacks on both the Saudi oil facilities and tankers.

Meanwhile, commenting on the situation in the Persian Gulf earlier in the month Iranian Navy Commander Rear Adm. Hossein Khanadi said that the United States must leave the region.

"The presence of the Americans in the Persian Gulf region has reached its end and they must leave the region," Khanadi said as quoted by the ISNA News Agency.