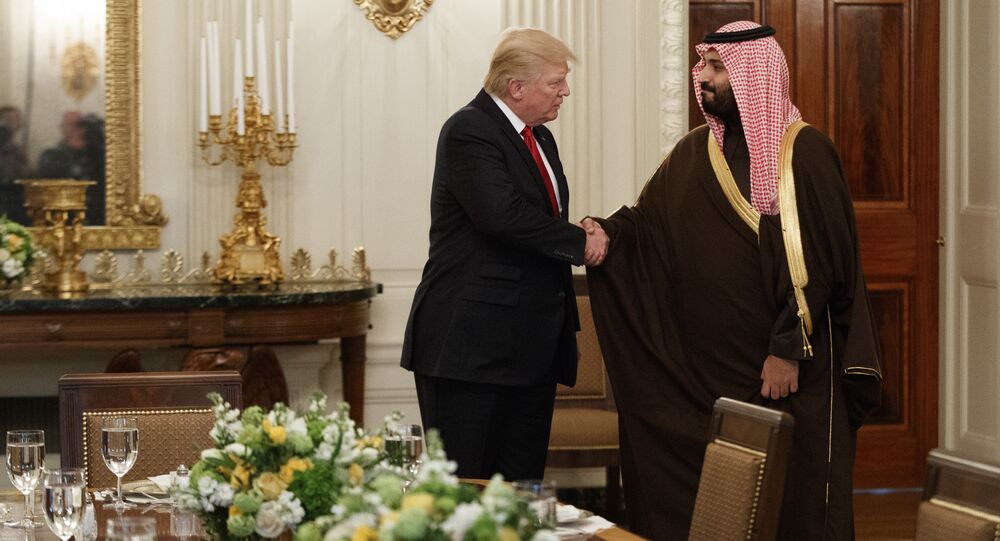 Falling oil prices are likely to come into focus at the upcoming OPEC meeting on 6 December in Vienna, Austria. However, Saudi Arabia’s willingness to resort to dramatic cuts in order to balance the energy market raises questions amid mounting pressure from the US, Europe and Turkey over the Khashoggi case.

Brent crude has plummeted below $60 per barrel (p/b) from its peak of $86 p/b registered on 3 October 2018, according to S&P Global Platts. It appears that US President Donald Trump who has long castigated the Organization of the Petroleum Exporting Countries (OPEC) for ‘too high' prices should thank Saudi Arabia for the current slump.

‘So great that oil prices are falling (thank you President T). Add that, which is like a big Tax Cut, to our other good Economic news. Inflation down (are you listening Fed)!' Trump tweeted on 25 November.

However, last week the US president expressed gratitude to Riyadh for the falling oil prices: ‘Oil prices are getting lower… Thank you Saudi Arabia but let's go lower.'

Oil prices getting lower. Great! Like a big Tax Cut for America and the World. Enjoy! $54, was just $82. Thank you to Saudi Arabia, but let’s go lower!

​Saudi Arabia raised crude production to an unprecedented 11.3 million barrels per day (bpd) by the end of November, as Reuters reported on 27 November citing an industry source.

© AP Photo / Hasan Jamali, File
Saudi Arabia Pumps All-Time Record Amount of Oil Amid Pressure From Washington
On the other hand, this November US field production of crude oil peaked at 11.7 million bpd, according to the US Energy Information Administration. The US Federal Statistical System's agency foresees that the US oil production will average 12.06 million barrels per day (bpd) in 2019.

In 2016, OPEC and several non-OPEC oil producers, including Russia, agreed to cut output by a total of 1.8 million barrels per day in an effort to stabilize global oil prices. The agreement came into force in 2017 and has been extended twice since then. The move was prompted by the steep drop in oil prices that started in 2014.

Speaking to CNBC, Scott Darling, head of Asia-Pacific oil and gas at JP Morgan, presumed that OPEC needs to cut its oil output by 1.2 million barrels a day to balance prices. JP Morgan foresees that Brent crude will average at $73 p/b in 2019 and will go to $64 p/b in 2020.

It is expected that OPEC and non-OPEC members will discuss purported cuts at the upcoming meeting on 6 December.

According to Forbes contributor Jude Clemente, principal at JTC Energy Research Associates, LLC, the OPEC Plus group may go as far as to decrease crude production by 1.4 million b/d ‘to resist a glut'.

He explains that the expected upsurge in oil prices following Trump's second batch of sanctions imposed on Iran on 5 November was counter-balanced by the US president's decision to grant waivers to eight nations to allow imports of Iranian crude.

Riyadh May or May Not Cut Oil Output Amid Khashoggi Fuss

On the one hand, the Saudi energy industry wants prices to stay above $70 per barrel, as Saudi energy minister Khalid al Falih outlined earlier this month.

On 23 November 2018, The Wall Street Journal reported that ‘Saudi Arabia and OPEC are inching toward a compromise between pleasing the US with policies that won't lead to price spikes and throttling back the flow of its oil to rebalance oversupplied global markets.' The media outlet suggested that Riyadh could cut its crude output by up to 1 million bpd, citing Saudi and OPEC sources.

© AP Photo / Charles Krupa
Hillary Clinton Accuses Trump of Being 'Part of Cover-up' in Khashoggi's Killing
On the other hand, the House of Saud has recently found itself between a rock and a hard place over the loud media fuss surrounding the murder of Saudi journalist Jamal Khashoggi, who was killed while visiting the Saudi Consulate in Istanbul, Turkey, on October 2.

Turkey and some EU member states pointed the finger of blame at the Saudi authorities, announcing bans on arms trade with the Gulf kingdom. Although some US lawmakers urged the US president to do the same, Trump stood up for both Riyadh and Crown Prince Mohammed bin Salman personally.

‘We may never know all of the facts surrounding the murder of Mr. Jamal Khashoggi,' Trump said in an official statement on 20 November. ‘In any case, our relationship is with the Kingdom of Saudi Arabia… The United States intends to remain a steadfast partner of Saudi Arabia to ensure the interests of our country, Israel and all other partners in the region.'

Under these circumstances one can imagine that the crown prince and the royal family would return the favour and not allow crude prices to skyrocket. As Reuters noted, citing ‘Saudi watchers' ‘the Prince will try to avoid confrontation with Washington, including on oil prices'.

However, according to Jude Clemente, ‘higher prices could be coming': ‘Bullish support comes once current US waivers on Iranian crude expire, as well as lower Venezuelan output and uncertainly over Libya', he predicts.