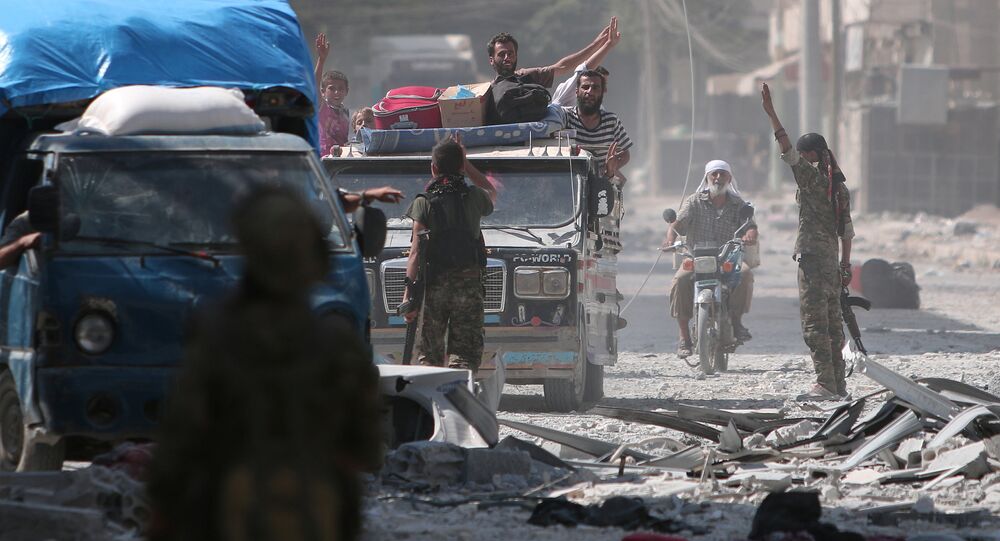 The United States and Turkey have not been able to reach an agreement over the Syrian city of Manbij, which has been controlled by the Kurdish Syrian Democratic Forces (SDF), who, in turn, had captured the strategic city from Daesh* with US-led coalition support in 2016.

The Syrian civil war might face a brand-new phase as the US-backed SDF and Turkish forces appear to be on opposing sides in northern Syria’s Manbij, which could undermine the fight against Daesh. While Ankara considers the People’s Protection Units (YPG), the leading component of the SDF, to be terrorists, and has repeatedly urged Washington to pull out the Kurdish militia from Manbij, the US has consistently argued that its forces are located in the city, and they have the right to defend themselves along with their partners.

Despite Turkey’s hardline rhetoric regarding the withdrawal of the SDF from the area and its full control over Afrin, the US’ stance did not change a bit. According to Nicholas Heras, a Middle East Security fellow at the Center for a New American Security, the US military are not willing to make concessions to Turkey over Manbij out of fear the US-backed SDF, consisting of Kurds and Arabs fighting Daesh, might spin out of control, as the move could be regarded as betrayal by the forces.

"Manbij for the US is more than just a territory on the map. For the US military it is the door that secures the Raqqa countryside and Raqqa is the showroom model for the US' post-IS [post-Daesh] stability building mission," Heras said as cited by Deutsche Welle (DW).

Earlier this week, the Turkish National Security Council warned that it would take the necessary measures if Kurdish forces did not withdraw from Syria’s Manbij, threatening to launch another offensive in the region if the militia did not meet Ankara’s demands.

"Terrorists in Manbij need to leave the region immediately; otherwise Turkey will not hesitate to take its own initiative as it did in other regions. Turkey will maintain the same steadfastness against terrorist groups east of the Euphrates," read the Council’s statement issued on March 28.

Having launched the Olive Branch operation in Afrin on January 20 to “clear” its border with Syria from terrorists, Turkey has consistently stated that the military endeavor would likely expand to Manbij, where the United States has some 2,000 of its troops deployed.  Ankara’s “Olive Branch” has been harshly condemned by the Syrian government, which dismissed Turkey’s offensive as a “violation of the country’s sovereignty.” As a response, Turkish Foreign Minister Mevlut Cavusoglu has argued that preservation of Syria’s territorial integrity was the common goal of both Ankara and Damascus, stressing that Turkish forces were fighting terrorists, not government troops.

"The Turkish objective goes beyond merely stopping the Kurds. It is to make Turkey a regional power or at least a power broker; a formidable player, on the map of Syria and also, if possible, Iraq's, to give Turkey a stake in shaping up the future of the region," said Cengiz Candar, a foreign policy advisor to former Turkish President Turgut Ozal, as cited by DW.

According to Candar, Turkey’s moves in Syria “look like permanently establishing a Turkish presence in northern parts of Syria that will serve Ankara, hitting many birds with one stone.”

Could US Deter Turkey?

"US policymakers believe Erdogan's appetite is bigger than just Manbij and they take him at his word. When Erdogan says Manbij, he means all the way to the border of Iraq. The mood within the US military is to not withdraw from Manbij unless there is a very clear and on paper agreement with the Turks as to the limits of where Turkey will be able to operate east of the Euphrates — which is nowhere. Unless there is that kind of guarantee, the mood is not to back down in Manbij," Heras said.

Meanwhile, Washington’s policy remains quite unclear: on the one hand, President Donald Trump has announced that the US will withdraw from Syria “very soon,” underscoring that Daesh has largely been defeated; on the other hand, the government has consistently ignored Turkey’s appeals to leave Manbij.

Cengiz Candar believes that such mixed signals from the United States “embolden Erdogan to follow a reckless policy in Syria which might end up with unintended consequences for all the parties involved.”

"Anything that would not be interpreted as appeasement could be considered as sober advice for the US policymakers in handling Turkey over northern Syria. However, I am also aware that sobriety is not a particular trait of the current American administration," he told DW.