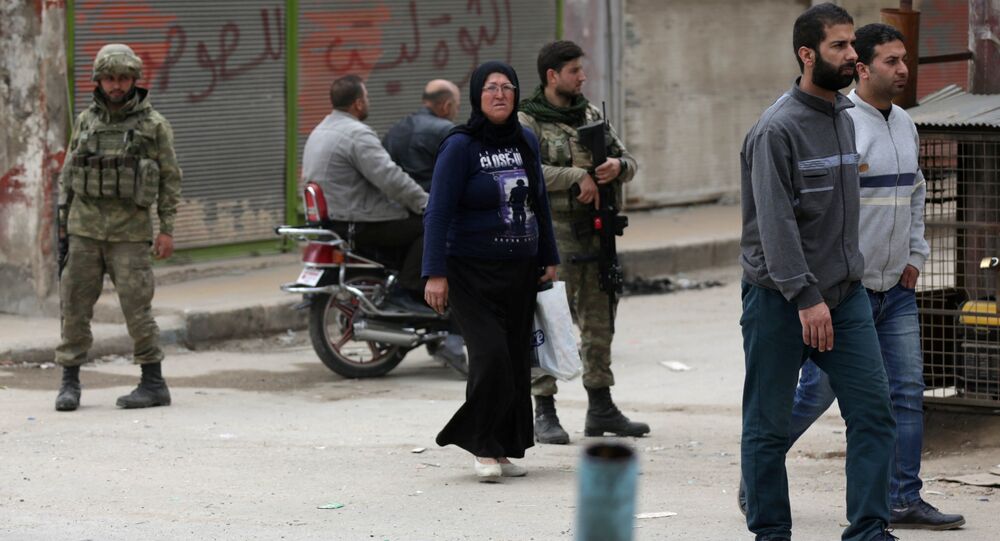 Commenting on the current situation in the northwestern Syrian region of Afrin during an interview with Sputnik, Hasan Shindi, press secretary of the Afrin Liberation Congress, has rejected allegations about the Faylak al-Rahman militant group entering the area.

"At present, we are holding meetings with the Turkish government and the opposition to help the civilian population return to Afrin and ensure the work of the municipal authorities in the city," Afrin Liberation Congress press secretary Hasan Shindi said.

He underscored that "we also work on clearing the territory of Afrin from mines and bombs, as well as providing medical and material assistance to the needy civilian population."

When asked about reports on the arrival of militants from the Faylak al-Rahman group in Afrin, Shindi said that according to the Afrin Liberation Congress' data, "there are no recently arrived people in the region."

"I want to point out that we will not allow strangers to be stationed in Afrin," he concluded.

The interview came almost a week after the Turkish Armed Forces' General Staff announced its establishment of full control over Afrin.

© Photo : Bertramz
OPCW Does Not Confirm Reports of Chemical Weapons Use by Turkish Army in Afrin
The Turkish military' Operation Olive Branch in the northwestern Syrian region was launched on January 20, when Ankara signaled its readiness to "clear" Turkey's Syrian border from a terrorist threat.

Operation Olive Branch was slammed by Damascus as "a violation of Syria's sovereignty." Despite the fact that the Syrian Army was not deployed to Afrin, it sent pro-Damascus militia to the area following the Kurds' calls to ensure their security.

The Afrin Liberation Congress was recently formed in the Turksih town of Gaziantep.

The views and opinions expressed by Hasan Shindi are those of the speaker and do not necessarily reflect those of Sputnik.