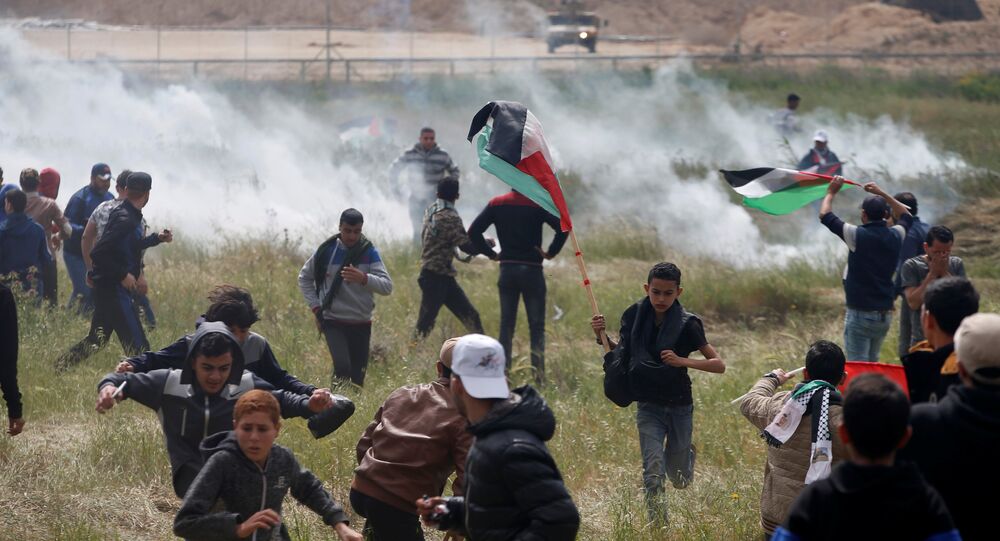 The IDF, which have doubled its troops and deployed snipers ahead of the rally, have started shooting and using riot control weapons.

They demand the right of Arab refugees to return to the territory of Israel, which the country has blocked over fears that it will lose its Jewish majority. The IDF have started shooting and using riot control weapons as mass sit-ins went out of control and dozens of protesters clashed with the Israeli troops.

It its turn, the Israeli military claims that the Palestinians rolled burning tires and threw stones at the IDF, who then responded with tear gas and fire at "main instigators."

Update from the Gaza Strip: Thousands of Palestinians are rioting in 6 locations in the Gaza Strip, rolling burning tires and hurling stones at the security fence and at IDF troops, who are responding with riot dispersal means and firing towards main instigators

Palestinian Ambassador: It is a Peaceful Protest

Palestine’s Ambassador to Russia Abdel Hafiz Nofal told Sputnik in an interview that he did not expect any violence from the Palestinians who were taking part in protests in the Gaza Strip and across Israel to mark the so-called Land Day.

"The event that started today is dedicated to the so-called Land Day, commemorating the day in 1976 when Israeli troops killed six Arabs protesting against the confiscation of land. This day will be celebrated not only in Gaza but in Ramallah and even in Israel. It is a peaceful protest that organized every year. We don’t know why this year the Israelis insist it would be violent, placing 100 snipers on the border with Gaza," Nofal said.

According to the ambassador, Hamas issued a statement calling on the Palestinians to hold rallies in a peaceful manner.

"An official Hamas statement on the occasion highlighted the peaceful manner of the protests. We do not expect any violence from the Palestinian side. There is an official order for peaceful protests," he said.

The area is declared a closed military zone. Any activity in the region requires IDF permission. There are no special instructions to citizens. The IDF also stated that the Hamas movement was endangering the residents and "using them as a cover for terror activities."

According to Israel Defense Forces spokesman Brig. Gen. Ronen Manelis, the army has prepared for trouble along the border which separates the country from the Palestinian Territories.

The rallies, inspired by the Palestinian Islamic fundamentalist organization Hamas, commemorate “Land Day” when Arabs honor the six Palestinian protesters who were shot and killed by the IDF in 1976. The protests, which Hamas claims to be peaceful, will culminate on May 15th, the 70th anniversary of the establishment of the State of Israel, when many Palestinians had to leave this state. Their descendants represent the majority of Gaza residents.

Now the Palestinians have set tent camps for sit-in on the border. On the final day, the protesters intend to cross the border fence, strongly opposed by the Israelis. Despite claims they don’t want violence, the IDF warns that they will fire if attempts are made at “mass infiltration” or if the demonstration grows violent and the fence is damaged.

“We will not allow the Hamas leadership to remain in Gaza by sending women and children to the border fence. If needed, we will respond to those behind these demonstrations both at the border and in Gaza. There is one task — to prevent a massive breach of the fence and the disruption of public order," Manelis’ statement reads.

The Jewish state intends to double its military presence along the border. More than 100 snipers have been deployed, as well as Special Forces and paramilitary police units for riot control.

Meanwhile, armor fire on Gaza border has left a Palestinian farmer killed and another man injured. The Israeli Army said they reacted to suspicious activity along the border fence.

Yasser Samour, a relative of the victim in the southeastern corner of Gaza, said the 27-year-old victim was harvesting parsley before dawn when he was attacked.

"I was working on the next field," Yasser Samour said. "We heard shells landing on the field where Amr works. We ran there and found him hit directly with a shell. We were more than a kilometer away from the border." At its narrowest, the Gaza Strip is just 6 km wide.

Tensions Escalated as Trump Declares Jerusalem the Capital of Israel

In December US President Donald Trump officially recognized Jerusalem as the capital of the state of Israel. The move was widely condemned at the UN, among European leaders, and even by Pope Francis. Six days after the announcement, Hamas, which governs the Gaza Strip, called for the beginning of the third "intifada," a word meaning "uprising."

Other critical factors include the worsening social and economic decline in Gaza, as well as the failure of reconciliation between the secular Fatah and Islamist Hamas movements.

With a population of over 1.8 million crammed into a 365 square kilometer strip of land along the Southeastern Mediterranean coast, the Gaza Strip has a higher population than Bahrain, is less than half its physical size, and has a GDP that is less than 1/30 that of the Persian Gulf nation.