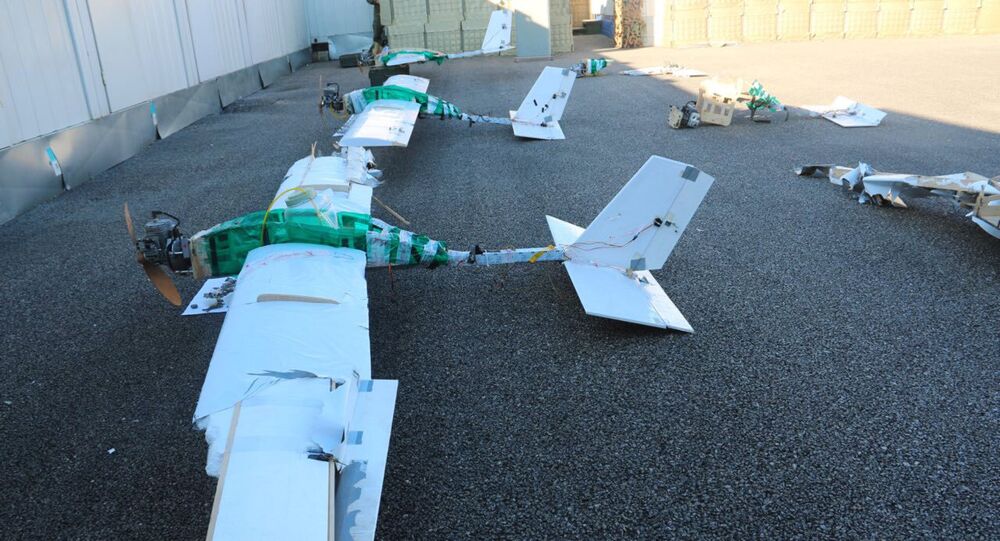 The Russian Defense Ministry has reported that drones used to attack the country's military bases in Syria, have been launched from one position.

According to the Russian Defense Ministry's analysis of the drones, captured after attacks on the country's military bases in Syria, shows that the experts, who created them acquired training abroad, in drone-producing countries.

"The research conducted shows that the radio electronic equipment installed on the UAVs allowed their automated, pre-programmed flight and ammunition discharge, eliminating the jamming of their control systems," Major-General Alexander Novikov, the head of the Department for Construction and Development of the System for the Application of the UAV of the General Staff of the Russia Armed Forces, said.

"In addition, the coordinates entered in the control programs of UAVs, are more accurate than the data generally available, for example, on the Internet," Novikov stressed.

He pointed out that until recently terrorists tended to use drones for reconnaissance tasks and these UAVs were rather primitive. However, terrorists started to use foreign-made quadcopters for different purposes in Syria in mid-2016.

"Until recently militants used drones primarily to carry out aerial reconnaissance. There were only several cases of their use for combat tasks. Usually, these were primitive drones made up from details that are at free access," Novikov added.

"Ammunition used on UAVs [in Syria attack] attracts particular attention. Those are improvised explosive devices weighing about 400 grams, equipped with striking elements in the form of metal balls with a destruction radius of up to 50 meters," Novikov said at a briefing.

"Each drone participating in the attack carried 10 pieces of such munitions," he added.

As the ministry representative has specified, militants have used a new type of UAVs, claiming that the explosives carried by them, could have been manufactured in a number of countries, including Ukraine. The analysis shows that the assembly of such type of drones was possible only with the use of manuals, with their components had been previously tested.

"Preliminary studies showed that TEN [pentaerythritol tetranitrate] was used as the basis of the explosive material in the ammunition… The given explosive material is produced by a number of countries, including at Ukraine's Shostka chemical plant," Novikov told reporters.

"It should be noted that we registered the emergence of drones of new types and modifications in militants' hands just days after their entry into free sale in various countries. The UAVs used by militants to attack the Russian Armed Forces' facilities on the night of January 6, were applied for the first time," Novikov said.

The General Staff carried out special research to identify the country, where these drones were produced, Novikov noted.

"The drones of this class could not have been produced in a hand-crafted manner. Specialists, who underwent special training in countries producing and using systems with UAVs, were involved in the development of these drones," Novikov added.

The Russian Defense Ministry called on journalists not to confuse the primitive assembly of these unmanned vehicles and the technical solutions applied to construct them.

"One should not confuse the primitive assembly of the drones presented to you with the engineering and technical solutions used during their manufacture. The production of such deadly machines requires superior professional knowledge, practical skills and experience in operating drones, " Russian Defense Ministry's spokesman Major General Igor Konashenkov explained.

Maj. Gen. Alexander Novikov has specified that terrorists will use unmanned aerial vehicles in any part of the world.

"The results of analysis of the obtained samples of drones and of their use [during an attack on Russian military facilities in Syria earlier in January] lets us make… conclusions: the emergence of a real threat linked to the use of unmanned aerial vehicles for terrorist purposes anywhere in the world, which requires the adoption of appropriate measures for its neutralization," Novikov said.

He continued by assuring that the ministry was monitoring the use of all kinds of munition and military equipment by militants in Syria.

"It should be noted that the Russian Ministry of Defense is constantly monitoring the use of all types of weaponry and military equipment by militants in Syria and developing the necessary countermeasures. This fully applies to UAVs," Novikov said.

How Russian Military Reacted the Attack

According to Novikov, Russia's Pantsir-S missiles have destroyed seven drones that we were attempting to attack's Russian military facilities in Syria.

"Seven drones were destroyed by the regular Pantsir-S air defense missile systems, six others were brought to the ground in a controlled area with the use of electronic warfare. At the same time, three drones have collapsed during the landing as a result of the explosion of ammunition placed on them," Novikov said.

The systems of detection, fire and jamming, deployed in Russian military facilities in Tartus, Hmeymim, have helped the Russian forces to repel the attack on January 6, the official noted.

"In order to counter the use [of drones] by militants at the airbase of Hmeymim and in the port of Tartus, echelon systems have been created, including the arsenal of detection, fire and jamming. This allowed to firmly repulse the attack of the terrorists on the night of January 5 to 6," Novikov added.

The Russian Defense Ministry has informed of an attempted terrorist attack on Russian military facilities in Syria on January 8, with media reports claiming that they were carried out from the area to the southwest of Idlib, controlled by so-called moderate opposition forces.