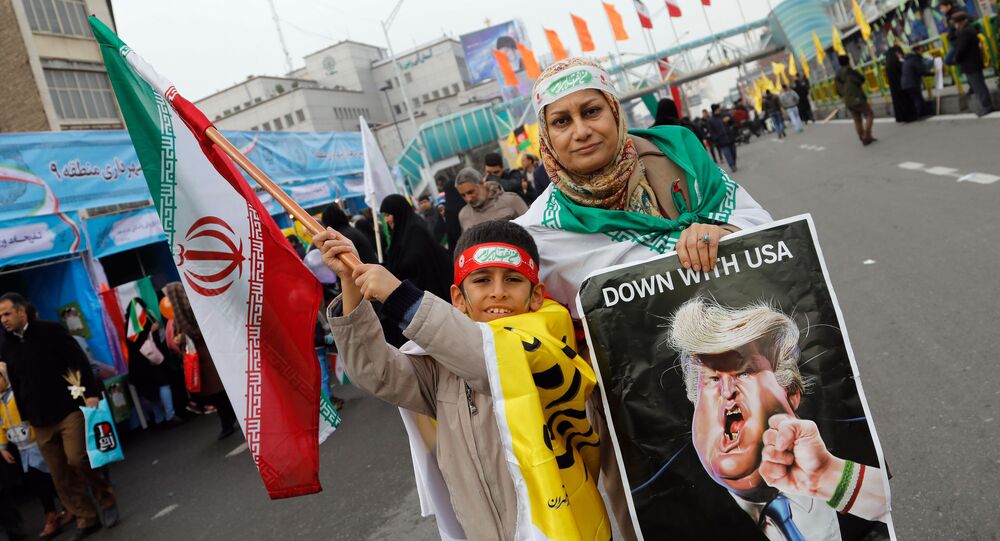 The Trump administration is unlikely to pull out of the nuclear deal with Iran, but goading Tehran threatens to endanger security in the Middle East, expert in Middle Eastern affairs Vladimir Sazhin told Sputnik Persian.

© AP Photo / Ebrahim Noroozi
Feminist Sweden Puts on Hijab in Hope of Doing More Business With Iran
The US and the Islamic Republic of Iran have never been on good terms, but their relationship has taken a turn for the worst under new US President Donald Trump, expert in Middle Eastern affairs Vladimir Sazhin told Sputnik Persian.

"Indeed, there has never been friendship between Iran and the United States. However, there have been noticeable periods of a softening of Iranian-American relations during the presidencies of Mohammad Khatami, and current President Hassan Rouhani," Sazhin said.

"The pragmatic policy of President Rouhani and US President Barack Obama, with strong support from Russia and other UN Security Council permanent members and Germany led to the signing of a very important document on July 14, 2015 – the Joint Comprehensive Action Plan (JCPOA), which marked the beginning of a fundamental solution to the Iranian nuclear issue."

Sazhin remarked that Donald Trump has targeted the Iran nuclear deal because of its association with the Obama administration.

"New President Donald Trump is very hostile to Barack Obama, and can't recognize any achievements of his predecessor, including those with regard to Iran," Sazhin said.

Trump has called the JCPOA "the worst deal ever negotiated," and earlier this month his administration imposed new sanctions against Tehran for conducting a medium-range ballistic missile test on January 29.

On February 3, the US Treasury Department imposed sanctions on 12 entities, as well as 13 individuals based in Iran, China, Lebanon and UAE which it deemed to be "supporters of Iran's Ballistic Missile Program and Iran's Islamic Revolutionary Guard Corps."

Last week, Iran announced it is putting in place its own counter-sanctions against the US. Iran's sanctions list is almost complete and "includes the names of American entities and individuals involved in backing Daesh, al-Qaeda and other terrorist groups as well as backing the Zionist regime in suppressing the Palestinian people," Iran's Foreign Ministry spokesman Bahram Qassemi was quoted as saying by the Mehr news agency.

© REUTERS / Faisal Mahmood
Iran Announces Counter Sanctions Against US
Iran maintains that the missile test, which occurred on January 29, did not violate the nuclear agreement or UN Security Council Resolution 2231, which affirmed the implementation of the nuclear deal.

Trump intensified his rhetoric in an interview with Fox News earlier this month. He said that Iran has "total disregard" for the US, and is the "number one terrorist state."

Russian Foreign Minister Sergey Lavrov responded by saying that Iran has never been involved with terror groups, and makes a valuable contribution to the fight against Daesh.

Sazhin told Sputnik that despite the escalation, it remains unlikely that Trump will tear up the nuclear deal, since the US is just one of several signatories to the agreement.

"Trump is not in a position to rip up the deal because it's an international agreement. A unilateral pull-out would be too adventurous even for a President such as Trump, because the image and authority of the US would fall sharply across the world, including in Europe. All those who took part in the negotiations (the UK, France and Germany) continue to support the JCPOA. Furthermore, almost all members of the EU have an interest in this international deal," Sazhin said.

© Sputnik / Natalia Seliverstova
Russia Concerned Iran Could Withdraw From 2015 Nuclear Agreement - Foreign Ministry
"That's why Trump is unlikely to take the US out of the JCPOA. However, it's likely that the Trump administration will slow down the process of implementation."

Iranian President Hassan Rouhani, who is facing elections in May, also has to deal with hardline opponents to the deal within Iran. Trump's comments give ammunition to those critics who want to rip up the deal, Sazhin said.

"It is possible that [following the election] it will be much more difficult to follow a 'liberal' policy both domestically and abroad, under massive pressure from the opposition, inspired by President Trump's anti-Iranian position. Therefore, great difficulties also await the Rouhani administration, both in domestic and in foreign policy, where Washington may well play a major destabilizing role."

"In this way, the Trump administration's anti-Iranian policies, which are predicted to continue until the end of Trump's political life, may well provoke a reaction from Tehran that will be dangerous both for Iran, and security in the surrounding region and entire Middle East," Sazhin warned.