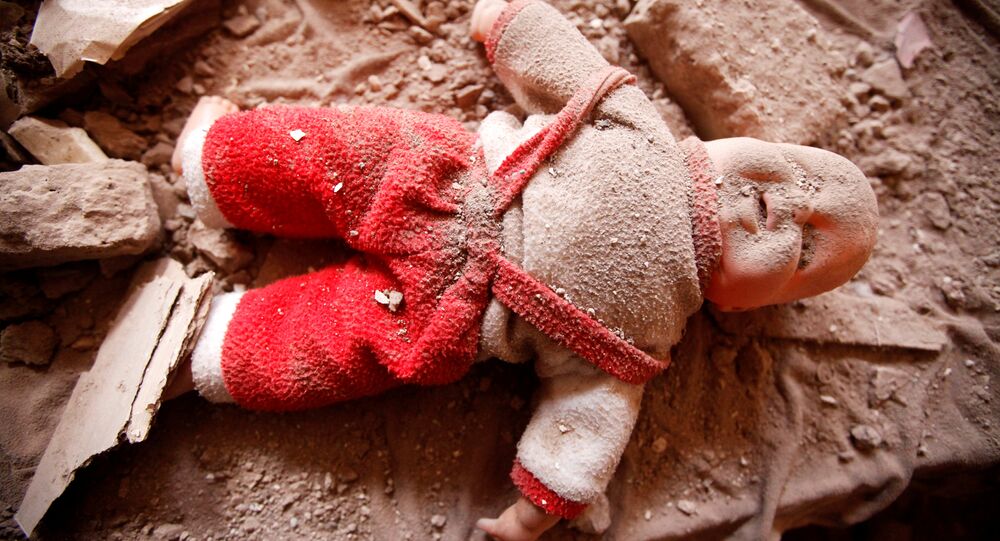 Amid wall-to-wall media coverage of the war in Syria, especially around the so-called 'fall of Aleppo', a war involving war crimes by governments allied to Western powers is taking place in another part of the Middle East, in Yemen. Unfortunately, coverage of that war is sporadic, even as millions of people face the prospect of a famine-genocide.

On Monday, the Associated Press published a short article about people in northern Yemen who are dying of hunger. The news agency recalled that a Saudi-led and US-backed coalition had initiated a blockade against territories controlled by the Houthi-led rebels, adding that the blockade has seen a 60% spike in food prices, which means that "now [Yemenis] can barely feed themselves."

But as The American Conservative contributor Daniel Larison pointed out, AP's story is actually a selective, sanitized report. "The coalition's responsibility for creating these conditions is even greater than the article states," he says.

For example, the journalist recalled, "in addition to a punishing blockade that has been in place for almost two years, the coalition has bombed major ports, roads, and bridges that are all critical to bringing in food and other aid."

Meanwhile, the so-called 'legitimate' government of Yemen, led by Abdrabbuh Mansur Hadi, who was ousted and fled to Saudi Arabia in March 2015, announced last month that the country's Central Bank would be moved to Aden, in the country's south, which remains controlled by forces loyal to the president.

That, Larison said, has "had the effect of rupturing one of the last national institutions left, and made it much harder for importers to arrange financing to bring in necessities. Shortly before the end of the year, major trading companies halted wheat imports into Yemen as a result of Hadi's Central Bank decision, which made the already dire situation in the country even worse."

The journalist stressed that Hadi, the Saudi-led coalition and its Western backers "have inflicted all of this on the civilian population of Yemen for more than twenty-one months in the service of an atrocious war effort that has failed in all of its stated objectives."

© Wikipedia / Ali Zifan
Insurgency in Yemen according to published reports. Green indicates areas controlled by the Houthis, Red by the Hadi government and allies, White by al-Qaeda in the Arabian Peninsula, and Black by Daesh.

Yemen, he said, is now "suffering one of the worst man-made disasters of this century," with millions threatened with death caused by starvation and preventable diseases. "And yet the US continues to support and enable the coalition war effort that bears a huge share of the blame for creating famine conditions in one of the world's poorest countries."

© AP Photo / Hani Mohammed
A woman sits next to her malnourished baby at a therapeutic feeding center in a hospital in Sanaa, Yemen. There have been numerous reported cases of dying from starvation in Yemeni hospitals.

"Unless something is done immediately to lift the blockade and bring in food to stave it off, Yemen's famine will only grow more severe," Larison warned.

Unfortunately, as Sputnik has already reported, most mainstream media coverage on the conflict in the Yemen has been "highly selective" and "palliative," owing to the inconvenient fact that Saudi Arabia is a major US ally, and receives weapons from several major Western powers, including the UK, Germany and Canada.

Yemen, human rights observers complain, has effectively been turned into the "forgotten conflict," and there is a danger that the country's humanitarian catastrophe may soon turn into a full-blown famine-genocide if the silence continues.

© Sputnik / Michael Alaeddin
Thousands Return to Now Peaceful Aleppo But You Won’t See It on CNN
Meanwhile, in a highly cynical maneuver, the mainstream media has devoted hundreds of articles and thousands of hours-worth of coverage of the situation in Syria, where they continue to promote the 'fall of Aleppo' narrative, even while the city begins to rebuild and thousands of civilians return to the liberated city.

But it wasn't Trump that started the Yemen campaign, nor was he the one to sign multi-billion dollar weapons deals with a country openly engaging in war crimes. Some observers have marked their concern that Trump may side with Riyadh in its regional power struggle with Tehran, which has supported the Houthis politically, if not militarily. Others, however, remain hopeful that the President-elect may at least tone down US support for the Saudi monarchy, particularly following Trump's very public criticisms of a Saudi prince over Riyadh's support for his opponents last year.

Ultimately, the world will have to wait and see how the new administration handles Saudi Arabia and the war in Yemen. Unfortunately, it looks like it won't be the mainstream media's coverage of that conflict that pressures them to make any actual changes in policy.