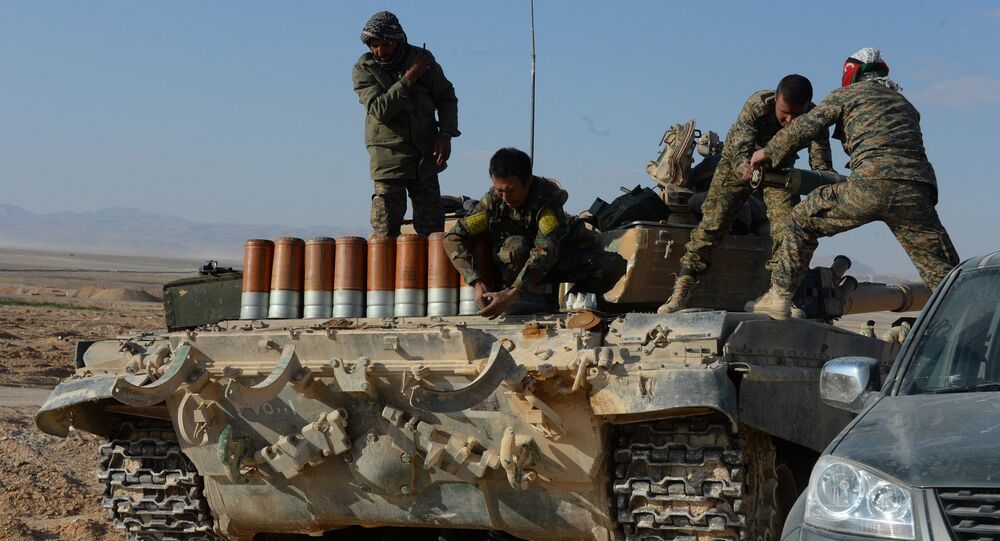 The Syrian army is regrouping around Palmyra, after Daesh retook the city following an opportunistic attack that looks to have had American involvement, Dr. Taleb Ibrahim, Deputy Director of the Damascus Center for International and Strategic Studies, alleged in conversation with Radio Sputnik.

The attack on Palmyra by Daesh terrorists on Sunday caught Syrian government forces on the hop, and the army is regrouping for an offensive to retake the city, Dr. Taleb Ibrahim, Deputy Director of the Damascus Center for International and Strategic Studies, told Radio Sputnik.

"The Syrian army wasn't in a very good position to fight because they were very busy with events taking place in Aleppo, and the defense units got too relaxed so they didn't set up a good defense for the city," Ibrahim said.

Ibrahim said that one of the most important things to note about the assault on Palmyra was the strategy of "hornets" used by Daesh.

"They are fighting using what they call the strategy of 'hornets.' In the beginning of their attacks, they send a small number of militants to attack army sites or cities, etc. After that, they come in waves, wave after wave until they capture the city or get what they want."

© AP Photo / Militant Photo
Barbarians at the Gates: 'It Will Take Time to Restore Status Quo in Palmyra'
"ISIS (Daesh) strategy is very effective and I think that unfortunately the Syrian army wasn't aware of it. Unfortunately, ISIS could regain all of Palmyra but the Syrian army has closed in on the surrounding area very well and I think they will regroup and make a counter-attack in the next few hours," Ibrahim said.

On Sunday the governor of Homs province, where Palmyra is located, said that the Syrian army had evacuated 80 percent of the civilian population, but that there are concerns for the safety of those who remain trapped in the city.

Ibrahim said that the Syrian army had begun to evacuate civilians after the first wave of Daesh attacks, but between 300 and 500 civilians have been trapped in the city by the terror group.

Daesh managed to carry out the assault despite being under attack from the US-led coalition and local forces in Syria's Raqqa and Iraq's Mosul, and Ibrahim linked the attack on Palmyra with events in those places.

© AP Photo / Militant Photo
US-Led Coalition's Mosul Strategy Allows Daesh Terrorists to Swarm Central Syria
"Everybody heard that the Syrian Democratic Forces (SDF) are planning to attack Raqqa, and there were some meetings between the Americans and the SDF to arrange for that attack."

"Suddenly, all the plans to attack Raqqa have been stopped, and ISIS (Daesh) has been given the green light to attack Palmyra. Somebody in American or regional military intelligence told them that Raqqa shouldn't be attacked. This allowed the terrorist group to send a vast number, 4,000 – 5,000 militants, and hundreds of vehicles and tanks to attack Palmyra."

"This couldn't have happened before, everybody knows that the airplanes of the US coalition are close to Raqqa and there is reconnaissance and surveillance etc. How ISIS (Daesh) could escape all of that, I am sure there is a kind of co-ordination between ISIS (Daesh) and the CIA and other regional intelligence services," Ibrahim said.