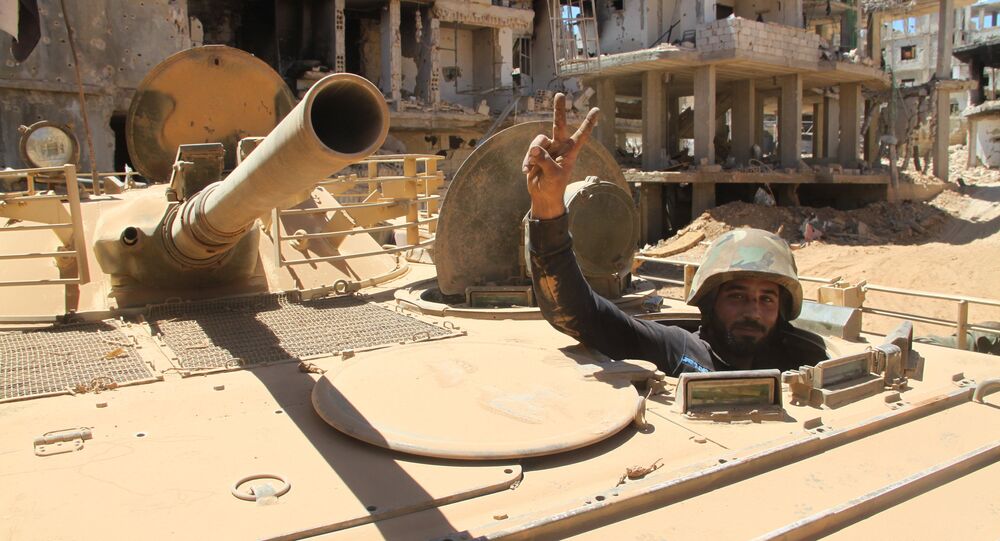 Race for Raqqa: Why Washington Wants to Capture the City

The Syrian Arab Army (SAA) and the US-led coalition are competing in a race for Raqqa, because the stakes are very high; to restore Syria's sovereignty, the SAA should be the first to expel Daesh from the eastern Syrian city.

© AFP 2020 / PASCAL POCHARD-CASABIANCA
On Shaky Ground: Will Washington Give Blessing to Saudi Invasion of Syria?
Over the last few days, the 555th Brigade of the Syrian Arab Army's 4th Mechanized Division, backed by pro-government militias, has continued to gain ground in northeast Syria. It has moved toward the Al-Raqqa Governorate's strategic Tabaqa Military Airport.

On Friday, Syrian armed forces re-entered the governorate for the first time since August 2014. Back in 2014, Tabaqa Military Airport was seized by Daesh (ISIS/ISIL) and turned into the terrorists' primary military base and training ground in Syria, according to the independent news source Arab al-Masdar.

"With the Khanasser-Ithriyah Road free of any ISIS [Daesh] presence, the Syrian Armed Forces can continue to concentrate their soldiers at the Raqqa-Hama axis without having to fear another disruption along their primary supply route to Aleppo," Al-Masdar News reports.

Raqqa and a number of other east Syrian cities along the Euphrates still remain under Daesh control. Both Damascus and the US-led coalition consider defeating the terrorist group their primary goal.

​However, the issue should be seen in a "larger context," the blog Moon of Alabama suggests.

© AP Photo / Mosa'ab Elshamy
Iran: Saudi Willingness to Invade Syria Reflects US Failure
"Could the US and its allies capture Raqqa or Deir ez-Zor and with it parts of eastern Syria? It could use them as a bargaining chip to gain some negotiation power with Syria and its allies over the future of Syria," the blogger writes.

On the other hand, the US-led coalition may create a Sunni state in northeast Syria and western Iraq, as Amb. John Bolton proposed in his November analysis for the New York Times.

"Rather than striving to recreate the post-World War I map, Washington should recognize the new geopolitics. The best alternative to the Islamic State in northeastern Syria and western Iraq is a new, independent Sunni state," Bolton elaborated.

It is not the first time the plan has emerged. In September 2013 a very similar vision was voiced by American veteran foreign-affairs reporter Robin Wright. And before that, in 2006 Army Lt. Col. (ret.) Ralph Peters presented his concept on how to reshape the Middle East.

The blogger suggests that Mosul may become part of a new "Sunni state" that would be put under Ankara's tutelage.

There are clear signs indicating that the US-led coalition could have been preparing for advance in northeast Syria.

The Pentagon has recently expanded the Rmeilan airbase in Syria's northern province of Hasakah; American helicopters were spotted using the base by independent observers on the ground.

© REUTERS / Umit Bektas
Saudi Arabia to Send Jets to Turkish Base for Air Missions in Syria
​The information has been confirmed by geopolitical intelligence firm Stratfor, which provided satellite imagery of the Rmeilan airfield. Furthermore, it is known that the US Special Ops have been deployed in Syria.

On Friday US Defense Secretary Ashton Carter met with his counterpart from the United Arab Emirates in Brussels. After the meeting, Carter said that the UAE had agreed to deploy its special forces troops in Syria to assist Sunni Arab fighters on the ground to capture Raqqa, the Associated Press reported.

The news is especially interesting in light of the recent Saudi vow to launch a ground operation in Syria with US backing.

At the same time, in mid-January, Ash Carter announced the US 101st Airborne Division would be deployed in Iraq to advise and assist Iraqi armed forces for an attack on Mosul.

Moon of Alabama offers a scenario of a potential advance of the US-led coalition against Raqqa.

"The Saudis would deploy from Saudi Arabia, likely via a US controlled airstrip in western Iraq towards Syria, while the brigade from the 101st would probably deploy from the Kurdish area in north Iraq through the Kurdish areas in north-east Syria towards Raqqa. Raqqa would thereby be attacked from a north-eastern and a south-eastern," Moon of Alabama suggests, adding that the airport of Rmeilan would be one of the major bases.

Currently Damascus' major objective is to preserve the unity and sovereignty of Syria. The loss of Raqqa would mean a devastating loss of the country's eastern oil fields.

Moreover, a new advance of the US-led coalition in Syria may trigger a new wave of violence in the region and result in a long and wider war.

"A ground operation would involve all participants in a war. Therefore, the Americans and our Arab partners must consider well whether they want a permanent war. They are wrong if they think they could win this war quickly, especially in the Arab world where everybody fights against everybody," Russian Prime Minister Medvedev stressed in an interview with Germany's Handelsblatt newspaper Thursday.

Saudis Trying to Embroil Washington in a Quagmire in Syria