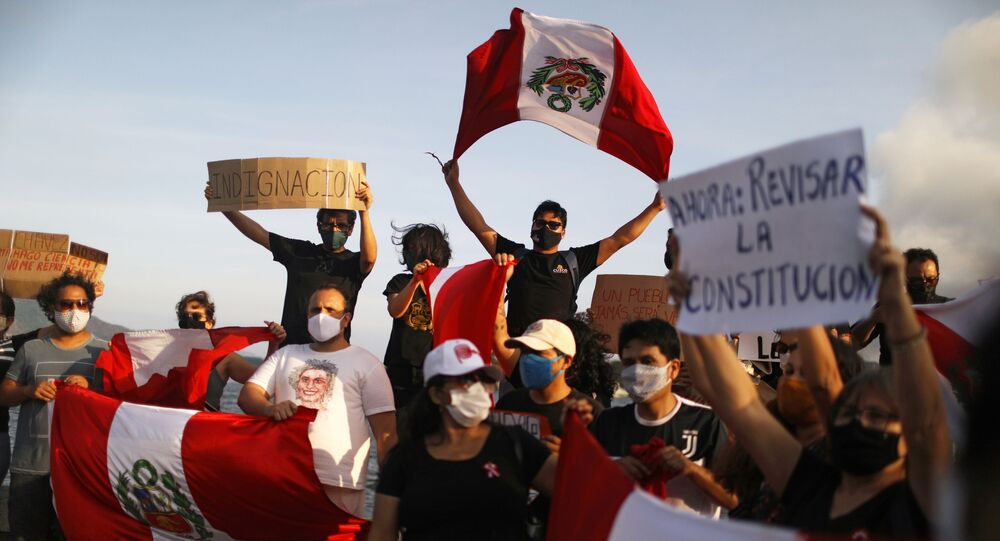 Three Presidents in One Month: What's Behind Peru's Social Unrest & Who Can Unite the Nation?

Peru has been undergoing a political upheaval this month, seeing two presidents step down and a third one sworn in on 17 November amid fierce clashes between police and protesters. Argentine political analyst and author Gonzalo Fiore Viani has explained the causes of the recent turmoil and its potential consequences for the continent.

The nationwide unrest was sparked by the impeachment of President Martin Vizcarra by the Peruvian Congress earlier this month over allegations that he had granted government contracts in return for bribes during his tenure as the southern Moquegua region's governor. Having denied the accusations, Vizcarra nevertheless accepted the vote and resigned, which prompted a mass popular uprising against his ouster. Manuel Merino, who took the reins of the country on 10 November, was forced to quit five days later after the protests took a deadly turn. Eventually, Francisco Rafael Sagasti was named as the interim president, obligated to hold the office until 28 July 2021.

What's Behind the Upheaval?

"Martin Alberto Vizcarra's downfall was predictable because he tried to challenge Peru’s historical political class", says Argentine author and political analyst Gonzalo Fiore Viani. "His main endeavour was his politics for transparency and the fight against corruption. The last five Peruvian presidents have been investigated and served jail time because of corruption issues".

During his tenure, Vizcarra repeatedly confronted the Congress on various issues, including educational, political, and judicial reforms. While facing opposition from Peruvian lawmakers, the former president nevertheless commanded the public's support. In 2018, the outcome of a national referendum indicated that ordinary Peruvians had endorsed the president's judicial reform.

Similarly, 91% disapproved of Vizcarra's removal, according to the Institute of Peruvian Studies (IEP), considering Congress' move nothing short of a coup.

Now, when Sagasti has taken the oath of office, he ought to make an effort to unite the country, according to Viani.

"I believe Francisco Rafael Sagasti has a lot of challenges", he says. "The first one is the necessity to unite the country. He will have to restore the confidence in the political class which is very hard to do. He will also have to block any attempts by some right-wing populist to take power in the next elections".

Who is Francisco Rafael Sagasti?

Sagasti, a Peruvian engineer, academic, and author, has a long record of serving in international financial entities such as the International Development Research Centre, World Bank, United Nations Commission on Science and Technology for Development, and the World Economic Forum.

He is also a legislator with the Purple Party, a centrist Peruvian political force that was opposed to Vizcarra's impeachment from the outset. According to the Associated Press, the latter circumstance could earn the 78-year old politician additional credibility among the protesters.

"In his inauguration speech, [Sagasti] asked for forgiveness in the name of the national state for the killings of protesters and promised these cases would not be left unpunished", Viani says. "After that he cited the left-wing iconic poet Cesar Vallejo, and he has already received the support and endorsement of former political presidential candidate, Nobel Literature Prize winner, writer and college professor Mario Vargas Llosa".

In addition to this, the new interim Peruvian president will have "two shields" to protect himself, says Viani, citing Argentine political analyst and author Leandro Dario:

·         first, the small bench of the Purple Party and a handful of other deputies, such as Rocío Silva Santiesteban, from the Frente Amplio;

·         second, popular support, which is far more powerful: the Peruvians made it clear that they will not tolerate any new manoeuvres by discredited parliamentarians.

Peru Heading to Presidential Election in 2021

South America has been shattered by a series of uprisings since 2019. The latest wave of protests in Peru resembles nothing more than the Chilean demonstrations, being largely a grassroots movement, according to the Argentine political analyst.

"I believe that this time there weren’t any internal and much less external players playing a role in this", he says. "It was the consequence of the longstanding political crisis in Peru. It is possible that after this, the Peruvian people can create a kind of movement similar to the one created in Chile, and seek for more profound reforms".

There is a situation of instability and turmoil happening right now across Latin America, the author admits. When asked whether the recent upheaval could affect the Andean country's immediate neighbours, Viani notes that Peru "has always been pretty unstable", but that has never affected neighbouring states.

"It is very likely that the instability will continue in the country because until now, there hasn’t been any politician or leader in the last few decades that can unite the country and stop the structural corruption, nepotism and institutional weakness", the political analyst stresses. "The next elections will be very soon [April 2021] but no one even knows the names of the potential candidates or who could be the next president".