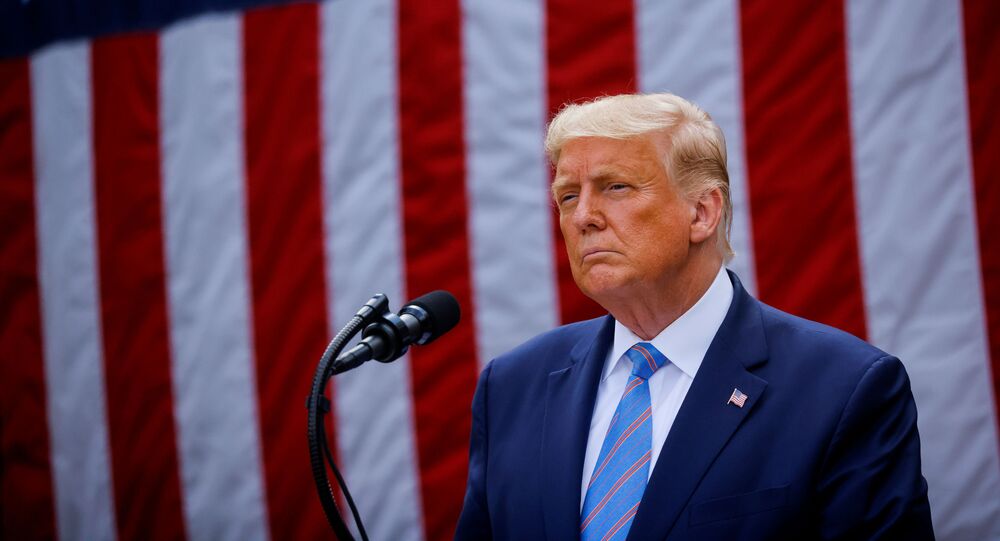 Pundit on Trump: I'll Vote for Man Who'll Bring Peace Back to US Regardless of What He Paid in Taxes

On 27 September, The New York Times published an "investigation", in which it claimed that Donald Trump’s tax bill was only $750 in both 2016 and 2017 - after he became US president. According to the newspaper, Trump paid no federal income taxes in 10 of the last 15 years.

Sputnik has spoken to Michael Shannon, a political commentator and Newsmax columnist, to discuss a wide range of issues: from The New York Times allegations about US President Donald Trump's tax record - released just days ahead of the first presidential debate - to the upcoming election, which will be held in unprecedented circumstances.

Sputnik: A NYT exclusive has revealed tax return data for President Trump and his companies that covers more than two decades. What can you say about the timing of this revelation?

Michael Shannon: Well, the timing is just part of a series of surprises that I anticipated we would have as we get closer to the election. You may recall the left has been trying to get the president's tax returns ever since he announced for the presidency in 2016. And it appears what happened is a judge in New York allowed the district attorney, I believe it was in New York City, to get a copy of his tax returns. And so, the district attorney illegally gave those returns to The New York Times.

Sputnik: How trustworthy is this information, in your view?

Michael Shannon: I don't trust The New York Times at all, particularly when they use anonymous sources. But if they have an actual document that can be verified, then I assume the information is there, but their interpretation of the information is still open for question.

Sputnik: How much damage could this cause for the president, his re-election bid, and the Republican Party?

© REUTERS / STRINGER
Donald Trump Dismisses NYT Report on His Tax-Return as 'Fake News'
Now, as for paying taxes the United States tax code is designed to make tax lawyers and lobbyists rich. It's not designed to be fair it's not designed to be efficient. So, if he had smart lawyers that made it so he only paid $700 worth of taxes and he followed the rules, then those are the rules.

Personally, I favour a flat tax for everyone. I don't know how familiar you are with this argument, but a flat tax would charge everyone the same percentage of their income and there would be very few deductions. So, it might be 10 percent. Everyone pays 10 percent regardless of what you make. Now, that, of course, will never pass because the lobbyists won't be able to influence legislators, and tax lawyers will be out of a job. So I don't really get exercised about the tax system because I know it's corrupt.

Sputnik: How much of a bombshell might this revelation be for American voters and the public? Will this somehow influence voters in November?

Michael Shannon: Without a doubt, it will influence some voters. But we have to put information into context and the context is that currently Joe Biden voters are burning down cities and shooting cops, and attacking Trump supporters.

So, if you look at the widespread civil disorder in the United States and your choice is between voting for someone who tries to create jobs and doesn’t pay a lot of taxes and his opponent who tries to create mobs and might pay all these taxes, I think I'll go with jobs and the guy that was able to pay lower taxes because he had better lawyers.

Sputnik: NYT writes that “Mr. Trump may be the wealthiest U.S. president in history. Yet he has often paid less in taxes than other recent presidents. Barack Obama and George W. Bush each regularly paid more than $100,000 a year”. How viable is this argument?

Michael Shannon: Well, one thing we need to remember is George Bush and Barack Obama accepted their salary. Donald Trump donates his entire salary. So, if you donate your salary as president, you don't have to pay taxes on it. There’s that factor. The other factor, Bush and Obama may have paid more taxes, but I really don't care.

There are things that are called valance issues. These are issues that are crucial to voters and are going to decide their vote. For me, it’s national security, law and order, and protecting the lives of the unborn. It’s not how much tax Trump paid compared to Bush or Obama.

© AP Photo / Evan Vucci
Donald Trump's Tax Records Shoot 'Nepotism Barbie' Ivanka Into Spotlight
So, the people who hate Trump are still going to hate him. The people who love Trump like my wife, she’s been a Trumpist for years, she's still going to love him and vote for him. When I look at the disorder in the country, I'm going to vote for the man who is going to bring peace back to the streets regardless of what he paid in taxes.

And the thing is, the reporters that complain about Trump paying such low taxes, I would be interested in asking them if they ever took a tax deduction or if they sent the government more money than they owed just because they were such generous charitable people.

Sputnik: We’re just hours away from the first presidential debates. To what extent might Democratic nominee Joe Biden use this scoop as leverage against the sitting president, Donald Trump?

Michael Shannon: Well, that's a very wise question, and I think that's exactly what he's going to do. I think that explains the timing. You're right on target there. It was released before this first debate and they certainly don't want to debate Joe Biden’s competency, his mental acuity, and they would much rather debate the expertise of Trump's tax lawyers and how much he sent the IRS.

Trump said something really kind of funny. He says a lot of things funny, but this is pretty funny. He said the IRS doesn’t like him in the first place, and they treat him like they’ve treated the Tea Party. So, if he pays taxes that low, you can be sure that it was legal. And that's the question, now if he was a tax evader, if he broke the law, if he had not filed tax returns then that would be something different. But just exploiting the system, everybody does that.

Sputnik: What can we expect from the upcoming debates in your view? Who is going to come out on top, Joe Biden or Donald Trump?

Michael Shannon: Well, that is the danger facing the country. I just wrote a column about this. The election is going to be won or lost in what they call battleground states. And what they're preparing us for now is that they say there will be what they call a red mirage on Election Day, which shows Trump ahead.

© REUTERS / MIKE BLAKE
An election worker places mail-in ballots into an election box at a drive-through drop off location at the Registrar of Voters in San Diego, California, U.S. November 5, 2018.

But in the week after the election, when they start and I use this word, in fact, counting the votes, then Trump's lead will begin to disappear and Joe Biden will be the winner after they finish counting. And the problem is in three of the four battleground states, the governor is a Democrat and the mayors of the three largest cities are Democrat in those states. And so, they appoint all the election supervision and counting officials. And that's where the danger is that they will steal the election. It’s not who votes, it’s who counts the vote. And they will steal the election through the count.