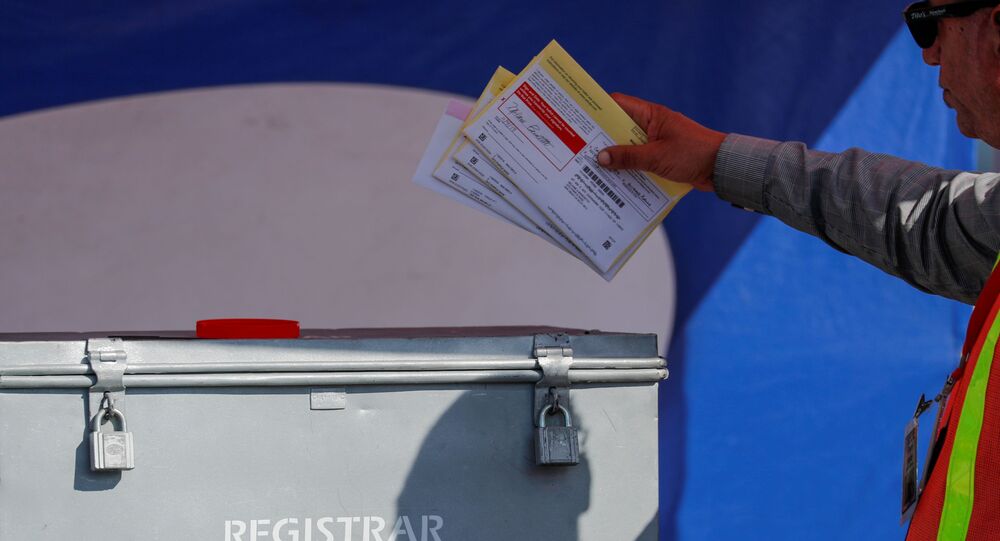 The Federal Bureau of Investigation had earlier launched a probe after several mail-in ballots cast for Donald Trump in the upcoming 2020 US presidential election were found discarded in the state of Pennsylvania.

The FBI-probed incident regarding "a small number" of discarded mail-in ballots in the state of Pennsylvania appears to have been the result of an administrative error by a temporary contractor, according to the Luzerne County Manager C. David Pedri, reported ABC News.

Pedri said in a statement issued on Friday that a temporary independent contractor, employed to sort mail at the elections bureau, had "incorrectly discarded into the office trash UMOVA ballots." UMOVA is an acronym for ballots from military and overseas voters.

The ballots were found inside a trash dumpster in close proximity to the elections building.

A witness tells Newswatch 16 these dumpsters were taken away from behind the Penn Place building — where the Luzerne County elections office is located — earlier in the week after they were sealed with red tape marked ‘EVIDENCE’. They have since been returned @WNEP pic.twitter.com/rKQo2M9CI3

​According to the county manager, the worker had been assigned on 14 September, but the error was discovered by Luzerne County Elections Director Shelby Watchilla two days later.

“Ms. Watchilla immediately began an internal inquiry and informed her direct supervisor. The temporary independent contractor was removed from service and informed not to return,” Pedri said.

After Watchilla informed Luzerne County Office of Law of the incident, it was “reported to the authorities”.

"Luzerne County Elections staff were unaware for whom the ballots were cast until the disclosure via Press Release of the United States Attorney on September 24, 2020," say the statement by Luzerne County Manager C. David Pedri.

Pedri was quoted as saying that "all garbage from the Elections Bureau" accumulated during the three-day period of the contractor's employment "was placed in a dumpster and secured by Luzerne County staff."

Subsequently, after garbage from the entire building in the dumpster was searched by the FBI, Luzerne County District Attorney’s Office, and Pennsylvania State Police,  items of concern were taken into custody by the FBI.

In conclusion, Pedri said that Luzerne County "will attempt to contact the voters involved and process their votes."

Ballot envelopes cannot be opened until the canvas is underway, writes the outlet, adding that counties are expected to adequately store and maintain the security of returned ballots.

© REUTERS / ALEXANDER DRAGO
A man and a woman look at their ballots before voting at an early voting site at the Fairfax County Government Center in Fairfax, Virginia, U.S., September 18, 2020.

In line with the recent incident, the county, along with the Pennsylvania Department of State, intends to provide extra training to all staff, while installing a security camera in the elections bureau to "actively monitor and ensure that all staff are strictly adhering to proper procedures and protocols."

The US Attorney's Office in the Middle District of Pennsylvania had announced on 24 September that nine ballots had been discovered in a dumpster next to the elections building, with seven reportedly cast for Donald Trump and the other two resealed inside their envelopes.

The incident triggered a Department of Justice (DOJ) investigation and fed into President Donald Trump’s earlier voiced doubts on the legitimacy of the US Election 2020.

A Justice Department official was cited by the publication as claiming that Attorney General William Barr personally briefed the president about the DOJ's investigation prior to it being made public on 24 September.

The issue of mail-in ballots was taken up by Donald Trump on Fox News Radio's "Brian Kilmeade Show.”

“We want to make sure the election is honest and I'm not sure that it can be. I don't know that it can be with this whole situation, unsolicited ballots,” Trump said.

​Referring to the incident with the discarded ballots, Trump said:

“They were Trump ballots - eight ballots in an office yesterday in - but in a certain state and they were - they had Trump written on it, and they were thrown in a garbage can. This is what’s going to happen.”

Netizens also weighed in on the incident with the tossed mail-in ballots, as some suggested there was something “fishy” about it.

So, let me get this straight, the ballots were "found" in an outside dumpster ? Who did the dumpster diving, and why ? How did they "know" ? I'd like to hear from the temporary contractor. Fishy.

You know, because temp workers would naturally just throw out mail! pic.twitter.com/2EL3vBgbGy

Yeah keep downplaying it 6abc “ a small amount of ballots”. It was 9. 1 is too many!

What do you consider a small number. Even if it’s one that is one to many !!

Others voiced agreement with the Trump stance that the mail-in voting might be “insecure”.

​Others however, applauded the actions of the Luzerne County officials.

The Luzerne County official reported the mistake - that is how we know about it- the system@was working!!!!

Nothing in this article remotely states that they don’t believe every vote counts. Quite the opposite. They literally dig through the trash to retrieve those votes.

​The issue of mail-in voting in 3 November presidential election has been a point of heated contention between the US Democrats and the Republican President.

Donald Trump has often asserted that widespread mail-in voting might lead to fraud. The Democrats, however, have been supporting voting by mail as a concession to the ongoing COVID-19 pandemic.