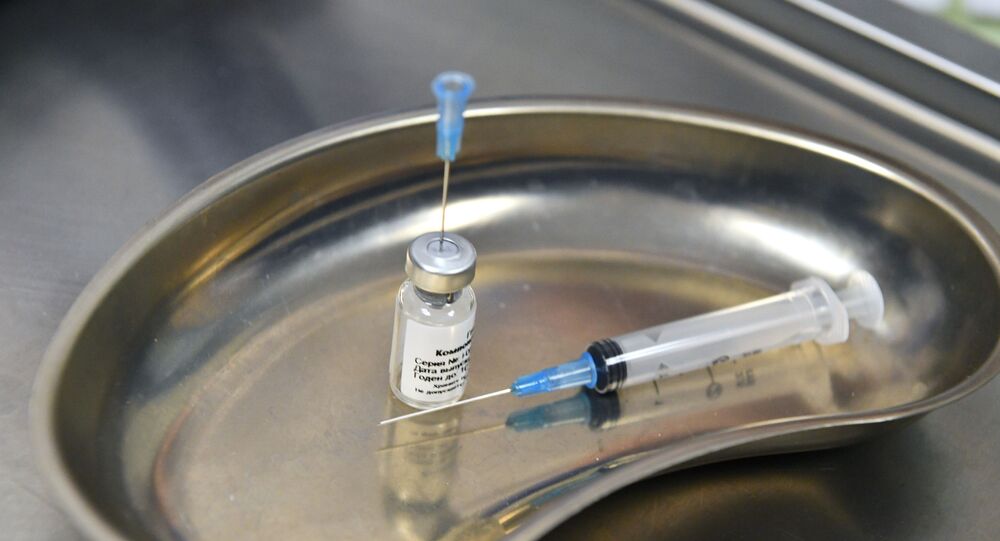 In a first substantial breakthrough in India for Moscow-based Gamaleya Institute vaccine Sputnik V, the multinational pharmaceutical company Dr. Reddy’s announced that it will be distributing 100 million doses of vaccine in India after conducting final-stage human trials and receiving regulatory clearances.

Sputnik spoke to India’s leading pharmaceutical company, Dr. Reddy's, in detail to understand what gave it the confidence to invest in a Russian-developed COVID-19 vaccine.

Deepak Sapra, Chief Executive Officer, (API and Pharmaceutical Services), Dr. Reddy’s Laboratories Ltd. revealed that the world’s first registered CoVID-19 vaccine has the potential to be “the vaccine” on basis of its science, adding that Russian Direct Investment Fund (RDIF), Russia’s sovereign wealth fund, had the motivation to make a positive impact on the world during times of crisis.

He underscored that the procurement of 100 million doses is subjected to successful final-stage trials and approval from the Indian drug regulator.

Kirill Dmitriev, the chief executive officer of RDIF, had revealed last week that by November the vaccine will hit the Indian market, following approvals from the authorities.

Sputnik: RDIF and Dr. Reddy’s collaboration is the first breakthrough for the Russian vaccine Sputnik V in India. How do you think a vaccine can help the second-worst hit nation India in its fight against COVID-19?

Dr. Reddy’s: As of today, 21 September, if we look at the global context, the world has about 30 million COVID-19 cases and about 959,528 plus deaths. Out of these 30 million cases, India has had over 5 million cases and about 85,000 deaths, which is a very large proportion of the global numbers. Currently, more than 90,000 cases and more than 1000 deaths are being reported every day in India. This is the magnitude of impact from Covid-19 on the world and India.

In India, the pandemic has not only affected the people who have been infected with the disease but it has had an impact across the spectrum of the population and the economy as well. Therefore, a potential vaccine would play a significant role to not only get the pandemic in control but also its consequential effect it can have to get life and economy back on track.

At this point, I would also like to say a few words about Dr. Reddy’s. We are a global pharmaceutical company headquartered out of India, and we have been accelerating access of affordable and innovative medicine for more than three decades around the world. We are present in most major countries in the world, and also have a very well established presence in Russia for more than 25 years.

Ever since the COVID-19 situation has unfolded, we have been at the forefront of the COVID-19 response across the therapeutic spectrum. The vaccine strategy is a complementary component of our approach to provide a solution on the prevention side as much as we have done on the cure side through therapeutics.

Sputnik: Why is Dr. Reddy’s betting big on Sputnik V and not some other vaccine candidate?

Dr. Reddy’s: This is a question on which we deliberated a lot during our discussion on partnership. The vaccine stood out for us for some of its key factors: first, the vaccine candidate is based on the human adenovirus. The world has had had experience with the adenoviral vector technology for decades and the vaccines based on this technology have been in existence for several years. Some of these vaccines are targeted against Ebola, MERS and SARS. That is one very important consideration we had.  The human adenovirus-based platform has a good and long-standing safety record that spans several decades.

© Photo : RDIF and Gamaleya Research Centre
Sputnik V, Other Vaccines are Hope for Ending Western Monopoly, Says India's RSS-Affiliate Body Head
The second key factor which really stood out during our evaluation process was the initial data we received from RDIF, our partners, was very consistent. The data showed good antibody titers and a lot of this data was also commented upon by global journals, such as the Lancet journal, which is one of the world’s leading science journals. That gave us an additional data point.

The third point, the core of the ongoing activity at the moment is that there is a very large global trial that is currently ongoing on more than 40,000 subjects in Russia. We believe that the data from such a trial would provide us with information on safety and efficacy which is most important for vaccines.

Our thinking was that if we can build upon these three points, and add to it additional scientific data by running clinical trials in India in collaboration with RDIF and in line with the guidelines of the Indian regulators, we could have a compelling case to approach the Indian authorities for seeking approval.

Sputnik: A lot of questions have been raised by sections of the media and medical community over the efficacy of Sputnik V since Russia announced itself as the first country to develop a COVID-19 vaccine. Did Dr. Reddy’s have any inhibitions?

Dr. Reddy’s: For us the safety and efficacy for the Indian population are paramount and our primary consideration. The RDIF has been very open and transparent in sharing the details and science behind their efforts. At the same time, Dr. Reddy’s is a company which takes pride in its science and its ability to understand the clinical and regulatory requirements around the world. We understand and respect that there is an additional activity that has to be carried out by us to be able to fulfil the requirements of the Indian regulators and in the process fully assure the safety and efficacy for the Indian population.

Upon successful trials, we will submit the data to the Indian regulators and request approval. If successful, it will give us a chance to make an impact in India and in the world in the times of an unprecedented crisis. The potential for us to make an impact, and create a difference in the life of a large number of people, on a basis that is backed by sound science and data has been the driving factor for us to get into this collaboration. RDIF, our Russian partners are equally motivated about the cause, and are working towards making a difference by creating a positive impact.

Sputnik: If we talk about the timeline, when can we expect the phase 3 trials to start and when is Dr. Reddy’s expected to receive the 100 million doses of Sputnik V?

Dr. Reddy’s: The procurement of 100 million doses will be subject to successful clinical trials and regulatory approval from the government of India. After establishing the safety and efficacy on the Indian population during clinical trials, we will approach the Indian regulator and make a request for approval.

During these unprecedented times, we are doing things on a war footing. In a few weeks from now, we will make a request to the regulators for starting phase 3 trials.

Dr. Reddy’s: This is an opportunity for the entire healthcare community, the pharmaceutical industry and the vaccine industry to collaborate in a manner that it accelerates the access to a vaccine.

© Photo : Serum Institute of India
India’s Largest Vaccine Manufacturer to Provide 50% of Anti-COVID Doses to Poorer GAVI Nations
We have great respect and admiration for what AstraZeneca and Serum Institute have been doing and I believe that many Indian and international organizations are putting their best foot forward on that front.

Sputnik: Can we expect any future deals with the GAVI (Global Alliance for Vaccines and Immunisation)?

Dr. Reddy’s: Currently, our collaboration is limited to India.  For the future, we along with RDIF are open to dialogue with other organisations, especially those who are working in the public health space, to maximize access.