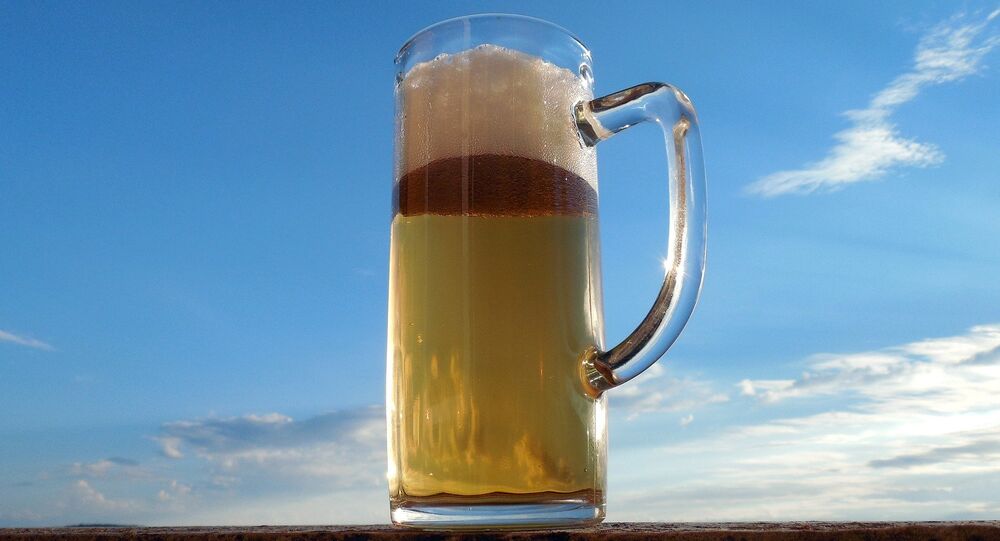 New Delhi (Sputnik): India’s third phase of Covid-19 lockdown began on Monday and will continue until 17 May. Among other relaxations the Indian government has allowed liquor stores to reopen.

The Indian government has allowed liquor stores to open amid the nationwide coronavirus lockdown, providing relief for the country's drinkers after 41 days of closure.

While many drinkers made a beeline to buy their favourite brands despite the scorching heat, the news also came as a huge relief for Indian state governments too.

These governments draw a large chunk of their taxes from liquor sales. Tax collection on liquor accounts for at least $26.66 billion across the nation.

Long queues outside liquor stores were a common sight across the country on Monday.

Some impatient consumers were unable to adhere to the mandatory social distancing norms, resulting in baton charges by police.

However, given the taxes on liquor sales, it’s the state governments that are having the last laugh.

Former president of the Institute of Chartered Accountants of India Ved Jain told Sputnik, “Excise on liquor is a low-hanging fruit for the state governments on which they are heavily dependent. Amid lockdown, it is given that vehicle registration or fuel consumption will not happen. So, all other tax revenue sources get choked. But liquor consumption will happen and it will also compensate to some extent the revenue loss from other sources.”

Ranging between 15 percent and 25 percent, tax on liquor forms a major chunk of tax revenue for the Indian states.

In the Indian states of Uttar Pradesh, Karnataka and Uttarakhand, state excise duty on liquor accounts for a little over 20 percent of their entire tax revenue.

Explaining the calculation behind liquor taxation by various Indian state governments, Rajat Mohan, senior partner from accountants AMRG and Associates told Sputnik, “Collection of revenue on liquor is a state subject. Some states collect it in the form of state excise, while some collect it as value added tax (VAT) and some collect both. On an average, 50 percent of the final sales value paid by the consumer for liquor is a contribution to the state tax authorities. This means that the average tax added to the cost of liquor is close to 100 percent of the sale price.”

These numbers run into billions. In fact, it is estimated that the larger states could have collected excise duty worth $22 billion from liquor sales in the current financial year.

The liquor association had lobbied for a relaxation of restrictions on sales amid the lockdown.

In its representation to the minister last month, CIABC asked the government to allow online liquor sales. It also referred to the fact that the liquor industry, provides a living to 4 million farmers and employs at least 2 million people.

The Indian state of Tamil Nadu ranks top in the tax collection on liquor. In the financial year 2018-19, the state earned $4 billion from excise duty on liquor. This was about 16 percent more than in 2017-18. Similarly, the Indian state of Haryana earned about $2.64 billion, while Maharashtra made $2.4 billion.

The stakes are high and the state governments need resources as funding on account of central share from the Goods and Service tax (GST) is set to dry up given the dismal collection by the Prime Minister Narendra Modi-led government in the first month of lockdown.

“Post GST, every state has limited resources of tax revenues, which includes state excise, state VAT, taxes on vehicles, property and capital transactions and taxes and duties on electricity. States’ revenue needs support from all sides in this difficult period of Coivid-19, and tax on liquor is significant one among all others,” added Mohan.