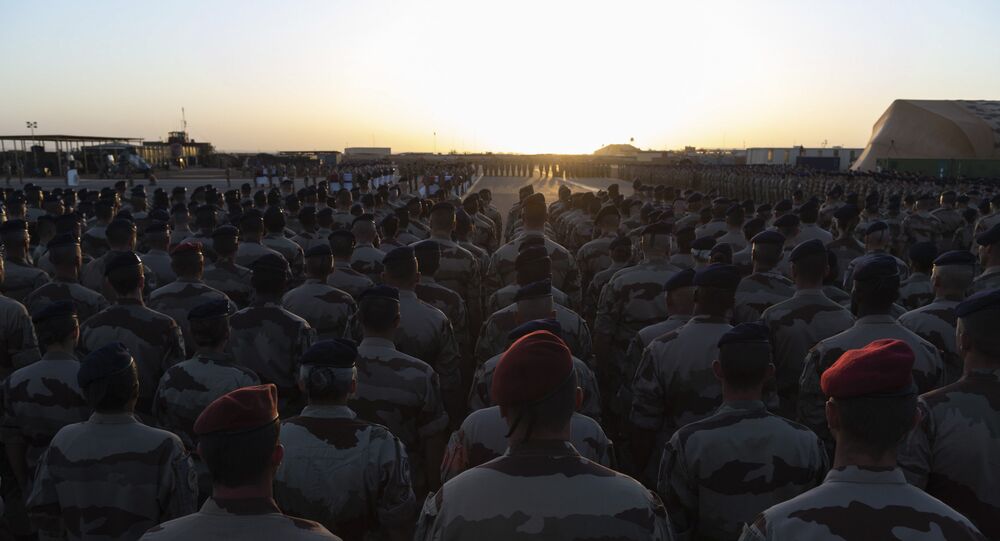 What is a Bigger Threat to France, Islamisation or NATO 2030 Doctrine?

The problem of France's Islamisation stems from the Cold War era, when Islamists were used by NATO allies as a tool against the Soviet bloc, says French politician Karel Vereycken, warning that now the transatlantic alliance is about to drag France into bigger trouble.

Earlier this month, conservative magazine Valeurs Actuelles published an open letter signed by active French soldiers who warned that the country was heading for "civil war" because of a growing Islamist threat.

The letter released by the magazine on 9 May echoed a previous one, published by the same media outlet on 21 April and signed by active officers and retired generals. The senior military brass warned that Islamists had been taking over large parts of the country's territory.

President Macron and France' Ministry of Defence denounced both letters as a "crude political scheme", with the French Army's Chief of Staff General Francois Lecointre hinting that the signatories should quit the armed forces. For her part, Marine Le Pen, a candidate in next year's presidential election and head of the political party National Rally, supported the service members' concerns.

The timing of these warnings could be linked to the upcoming 2022 elections and it can't be ruled out that some of the military personnel who signed the letters are sympathisers of Marine Le Pen, suggests Karel Vereycken, a political analyst and vice president of Solidarite & Progres, a political party founded by Jacques Cheminade.

"The French 2022 presidential gamble is already becoming a scramble", he says. "Both Macron and Marine want to polarise the debate exclusively on the main issue they expect will hand them over a presidential victory: public security and immigration. They also want the voters to forget they both agree on paying the national debt at all costs and want France to remain in the EU, in NATO and keep the euro".

In October 2020, French President Emmanuel Macron announced a plan to crack down on "foreign influences" and "Islamist radicalisation" in France. Late last year, France was shocked by the decapitation of French teacher Samuel Paty and a brutal stabbing attack on parishioners at the Notre-Dame basilica in Nice by radical Islam sympathisers.

© AP Photo / Lewis Joly
The portrait of slain teacher Samuel Paty with a black ribbon is displayed Tuesday, Oct.20, 2020 on the steps of the National Assembly in Paris.

"Still, it is too early to really evaluate the impact of these measures", says Vereycken. "Radical Islam is a world phenomenon and can only be dealt with in the framework of international cooperation… The French generals are right: the threat of terrorism is real, and governments should not only deal with the symptoms, but uproot its causes".

How NATO Adventurism Opened the Door to Islamisation

In fact, France is reaping what NATO sowed during the Cold War, according to the French politician: the transatlantic alliance and its members routinely used radical Islamists against the Soviet bloc.

British secret services are believed to have started cooperating with the Islamic fundamentalist Muslim Brotherhood* in 1941, while in 1986 the CIA regarded the Islamist organisation as a potential spearhead of the opposition movement against the secular government of Hafez Assad in Syria.

Likewise, British Prime Minister Margaret Thatcher funded the Afghan Mujahideen and "Islamic resistance" to fight against the USSR in the early 1980s, according to top secret UK documents declassified in December 2010. For its part, the US launched Operation Cyclone aimed at arming and funding Afghan guerrillas six months before the Soviet intervention, according to the memoir of ex-Director of the CIA Robert Gates.

The situation has not improved much since the end of the Cold War, according to Vereycken:

"NATO’s decision to bring about the downfall and disgraceful assassination Gaddafi created more waves of terrorism in the West than any radical imam’s hate speech in a French mosque", he notes.

The French Air Force played an active role in the NATO-led intervention in Libya. However, the collapse of the Gaddafi government prompted a mammoth flow of refugees to Europe, and France, in particular, as well as the rise of Islamism – something that Colonel Gaddafi warned about in 2011.

Likewise, the Obama administration's apparently "wilful decision" – as General Michael Flynn described it in his interview with al-Jazeera in 2015 – to neglect the fact that the Syrian insurgency was driven by Al-Qaeda in Iraq*, the Muslim Brotherhood*, and Salafists opened the door to further destabilisation and radicalisation of the Middle East.

The French politician asks rhetorically how the West can de-radicalise Islam while it has repeatedly backed, financed, armed, and promoted jihadists in Afghanistan, Libya, Syria, and elsewhere.

The article, titled "OTAN 2030: 'Il faut stopper ce train fou avant qu’il ne soit trop tard!'" ("NATO 2030: 'We must stop this crazy train before it is too late!'"), discusses the alliance's new doctrine, which outlines its mission for the next 10 years.

General Diamantidis has drawn attention to two concepts in the "NATO 2030" report:

·         first, it labels Russia and China as two major threats and calls upon Europeans to confront them;

·         second, it concentrates power in the hands of the Supreme Allied Commander Europe – an American officer –  for the sake of efficiency and speeding up decision making; in addition, it calls for a massive increase of powers of NATO and its secretary general over those of the member states.

According to the retired general, the NATO 2030 initiative "clearly reveals a monument of tranquil bad faith, of quiet disinformation and of instrumentalisation of this ‘Russian threat’, a ‘threat’ patiently created and then maintained, so as to [discipline] the European allies behind the United States, in the perspective of an upcoming battle with China for world hegemony".

The priority threat to France is not Islam or immigration, but NATO's 2030 strategy, which is a threat to world peace and an additional step towards a world government, doing away with the last bits of France's national sovereignty, argued Diamantidis.

Since President Nicolas Sarkozy’s announcement in 2007 that France would return under the integrated command of NATO, putting French military might under NATO – de facto the US – command, a section of the French military has become increasingly uncomfortable, Vereycken recalls. However, the new NATO doctrine is going to drag France into a confrontation with Russia and China altogether, according to him.

Vereycken highlights that it is impossible to solve the Islamisation problem without working in concert with Moscow and Beijing, adding that the Schiller Institute, founded by Helga Zepp-LaRouche, has become one of a few international platforms consistently promoting multi-polarity and cooperation with Russia and China. The institute's latest conference, which took place on 8 May, insisted on the creation of a new paradigm in light of the "moral collapse of [the] Trans-Atlantic World."

*Muslim Brotherhood and al-Qaeda in Iraq are terrorist organisations banned in Russia and many other countries.