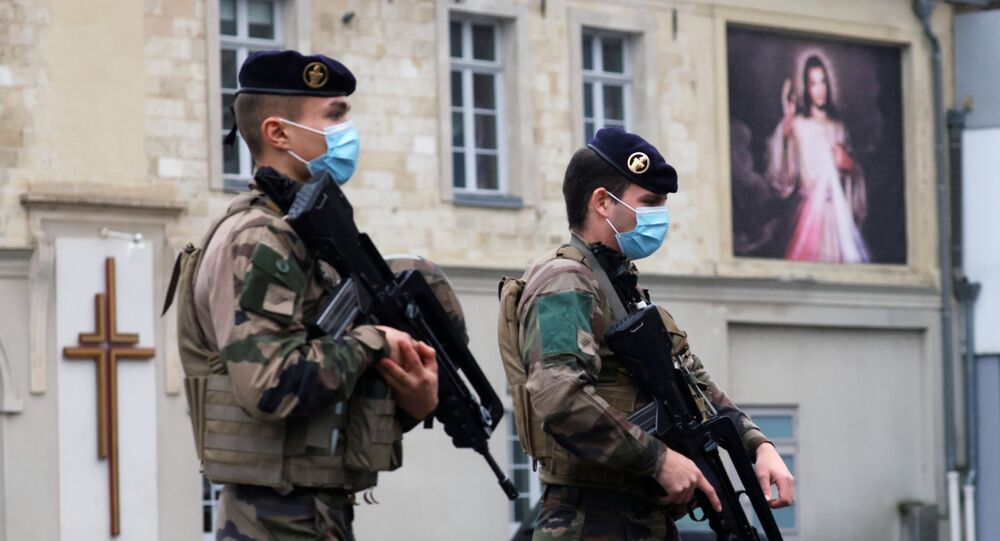 On 5 November, a rally was held in Vienna, Austria, commemorating the victims of Monday's massacre that claimed the lives of four and left 22 more wounded. French politician Karel Vereycken has explained how Europe found itself in Islamism's crosshairs and why the EU urgently needs to team up with Russia and China to fix the problem.

The shooting spree in Vienna came on the heels of stabbing attacks in Nice and Paris. The French and Austrian authorities agree that the assaults have all the earmarks of Islamist terror acts.

Cold War Roots of Islamism: Are the Chickens Coming Home to Roost?

While some observers have suggested that the stabbing incidents in France could somehow be connected with the trial of 14 suspects in the 2015 Charlie Hebdo attack and Emmanuel Macron's vow to promote French secularism, the subsequent Vienna shooting indicated "that the issue is much larger than a couple of deliberately provocative cartoons" says Karel Vereycken, a political analyst and vice president of Solidarite & Progres, a political party founded by Jacques Cheminade.

Having noted that it would be a mistake to reduce the phenomenon to a purely sociological issue, the politician says that the origins of Islamic terrorism come from the Cold War when jihadists were used as an efficient tool against NATO's adversaries.

British Prime Minister Margaret Thatcher started financing the Afghan Mujahedeen and "Islamic resistance" to fight against the USSR in the early 1980s, Vereycken recollects, referring to top secret UK documents declassified in December 2010. The documents demonstrated that London and Washington were actively providing military aid to the Mujahedeen during the USSR's military campaign in Afghanistan. The countries encouraged a continued guerrilla resistance to "make it costly for the Soviet Union" and kept the Islamic world stirred up over the Soviet Afghan operation.

"Thousands of radical jihadists, coming from Northern Africa, the Middle East, and the Balkans, participated in this US-British war against the USSR", the French politician says. "When, subsequently, in 1989, Soviet forces pulled out of Afghanistan, many of these 'Afghan' veterans returned to their home countries, setting up training camps all over the planet, notably in Pakistan, Saudi Arabia, Bosnia, Macedonia, Tunisia, Algeria, China, etc".

These clandestine training camps in the Middle East, North Africa, and the Balkans continued to produce young jihadists who then joined various global Islamist organisations, such as al-Qaeda* and the Muslim Brotherhood*, among others. The latter is believed to have started communicating with British intelligence in 1941, according to historian and ex-Chatham House research fellow Mark Curtis, who outlined Britain's collaboration with international Islamic entities in his book "Secret Affairs: Britain's Collusion with Radical Islam".

"Added to this, the deliberate destruction of secular Islam and Arab nationalism (Baath Party, for instance) in Iraq, Syria, and Libya allowed this monster to conceive a worrisome lot of monstrous children, known today as Daesh* rejoined by some 40,000 people worldwide", Vereycken notes.

There could be a number of scenarios behind the recent upsurge in violence in France and Austria: either Europe's irresponsible policies towards the Muslim world have backfired or some forces are deliberately sowing panic among EU member states already struck by the coronavirus pandemic, according to Vereycken.

Besides funneling money and weapons to jihadists in the Middle East, North Africa, and Central Asia in the 1980s and later, some European countries also opened their doors to migrants from predominantly Muslim countries as well as to various Islamic institutions without precautionary verifications and the required measures to accompany successful integration, according to the politician.

While discussing the Brussels terror attacks with Sputnik in March 2016 – in the midst of the Syrian war and the European refugee crisis – Vereycken raised the alarm over the Islamist indoctrination of Muslim youth in Europe by Wahhabi and Salafist preachers. The analyst noted at the time that a number of Belgian and French Muslim entities had ties to the Muslim Brotherhood.

Four years later, in July 2020, the French Senate released a 224-page report describing the growing influence of Islamists over France's Muslim community in the past 20 years and singling out the Muslim Brotherhood. According to the document, the entity controls about 10% of all the mosques in France and at least 600 associations.

In early October, French President Emmanuel Macron outlined a plan to crackdown on "foreign influences" and "Islamist radicalisation" in France. Following the beheading of French teacher Samuel Paty on 16 October in a Paris suburb, the French government dissolved the Cheikh Yassine collective allegedly affiliated with Hamas (a Muslim Brotherhood branch), signaling that many more dissolutions are on the table.

"The French government is not yet aiming to reach the top of the command structure, but [is] at least trying to reduce the country's vulnerability to operations planned from the outside by the so-called 'Islamic State' [Daesh] and those running it", says Vereycken. "One French association is being dissolved because, according to the government, its founder personally went to Syria and entered the zone occupied by Daesh".

© REUTERS / ERIC GAILLARD
Candles, flowers and messages are seen in front of the Notre Dame church in tribute to the victims of a deadly knife attack in Nice, France, October 30, 2020.

The Islamisation Problem Can be Solved in Concert With Russia & China

The issue of Islamisation has to be solved at many levels; however, it's important not to make the same old mistakes, according to the French politician.

"Since the terrorist attacks hit several European countries, the EU will have to come up with some answers", Vereycken says. "Italian Foreign Affairs Minister Luigi di Maio is now pleading for a European 'Patriot Act' on the model of the US law of the same name, while everybody knows that Bush's 'war on terrorism', legalising torture, surveillance and 'targeted assassinations' by drones, provoked a lot of collateral damage, while not going after the 'invisible' infrastructure of terrorism, and only made things worse".

To uproot the problem leaders in the US and Europe have to review policies conducted by preceding administrations in Muslim countries as well as their clandestine operations, according to him.

In addition, Europeans have to encourage the most progressive and humanist versions of Islam to steer it away from radicalism.

"France, which has overcome its internal religious division and whose Cardinal Mazarin became the key architect of the Peace of Westphalia in 1648, can inspire and become a tool of inter-mediation for such a better and more peaceful world", Vereycken opines.

At the same time, the politician argues that it's time for the EU to respond to Moscow's request to organise a conference of refugees in Syria on 11-12 November, suggesting that the initiative "would create a counter-balanace to the irrationality of terrorism".

"Such a summit event would be the perfect occasion for the USA, Russia, China, France, and the UK to establish the type of G-5 coordination currently crucial to solve all major challenges facing humanity, be it the world food crisis, nuclear disarmament, the world COVID-19 epidemic, or to reconstruct a decent Bretton Woods mechanism required to rebuild the world economy", he concludes.

*Al-Qaeda, the Muslim Brotherhood, and Daesh (ISIS/ISIL) are terrorist organisations banned in Russia and many other countries.