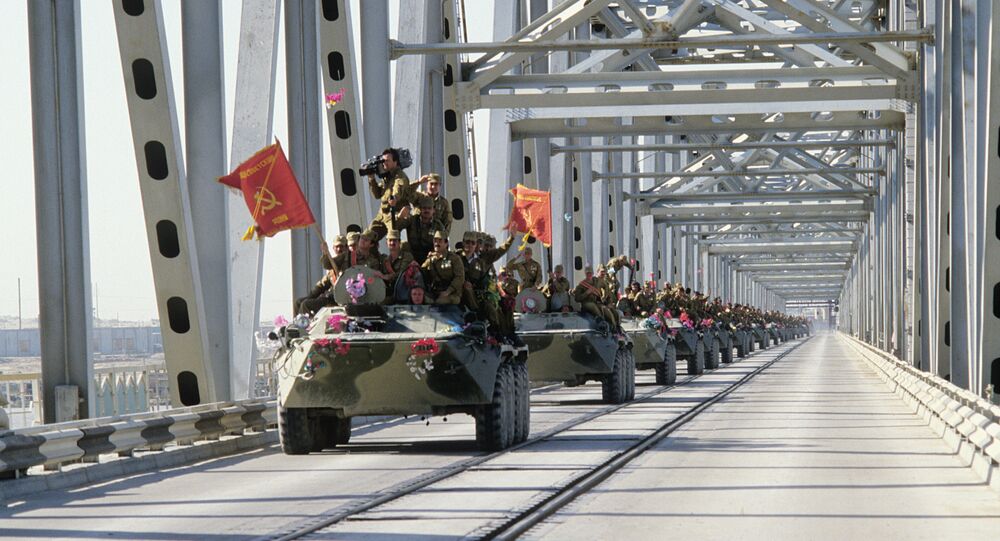 On 15 February 1989, the Soviet Army withdrawal from Afghanistan was completed, marking the end of the nearly decade-long Soviet-Afghan war. Sputnik looks back at the Soviet campaign, the consequences of which continue to affect Russia and all the parties involved in the Afghan peace process.

Exactly 30 years ago the last units of the Soviet limited military contingent left Afghanistan. The campaign was officially launched on 24 December 1979 in response to repeated requests from the Democratic Republic of Afghanistan (DRA) and growing concerns that the Afghan turmoil could spill over into then Soviet republics in Central Asia.

The USSR's military campaign in Afghanistan immediately came under heavy criticism from the US and its allies. On 14 January 1980 the UN General Assembly adopted resolution ES-6/2 in which it "deplored" the armed intervention in Afghanistan and called for the withdrawal of all foreign forces from the country.

© CC BY 2.0 / The US Army
US Promised Taliban to Withdraw Half of Troops From Afghanistan by End of April - Movement Representative
However, the USSR was not the only party wading into the Afghan conflict as the US took an active part in the covert war on the side of the Mujahideen.

In his memoir titled From the Shadows: The Ultimate Insider's Story of Five Presidents and How They Won the Cold War ex-director of the CIA, Robert Gates, revealed the details of the US intelligence agency's covert effort, dubbed Operation Cyclone. The secret operation envisaged arming and funding Afghan guerrillas began under then US President Jimmy Carter six months before the Soviet intervention. This was confirmed by Zbigniew Brzezinski, a prominent geopolitical analyst and then national security adviser to Carter in a 15 January 1998 interview with Le Nouvel Observateur's Vincent Jauvert.

Time Magazine recalled in 2003 that Operation Cyclone had become "one of its longest and most expensive" covert efforts: The US supplied billions of dollars in arms to the Mujahideen with Osama bin Laden, the would-be founder of al-Qaeda*, being one of the rebel recipients, according to the magazine.

How the Reagan Adm. Boosted the Mujahideen's Military Capability

According to a 1988 New York Times' report, under Carter the Mujahideen were supplied with Soviet-made light arms. Between 1981 and 1985 the US delivered a vast variety of weapons to the Islamic guerrillas, including bazookas, mortars, grenade launchers, mines and recoilless rifles, Swiss-made 20-millimetre antiaircraft guns and 107-millimetre multiple rocket launchers produced in China. In March 1986 President Reagan approved the delivery of the deadly Stingers, man-portable air-defence systems (MANPADS), to the Afghan insurgents in a bid to expel Soviet troops out of Afghanistan ''by all means available".

Apart from weapons, beginning in 1985, the US supplied the Mujahideen with extensive satellite reconnaissance data of Soviet targets, plans for military operations based on satellite intelligence, intercepts of Soviet communications, secret communications networks for the rebels, delayed timing devices for C-4 plastic explosives, long-range sniper rifles, wire-guided anti-tank missiles, and other equipment, The Washington Post pointed out in 1992 citing intelligence sources.

The famous Tora Bora underground fortification, located 35 miles southwest of the city of Jalalabad in Nangarhar province, had also been "a CIA-financed complex built for the mujahedeen", as The New York Times wrote in 2005. Osama Bin Laden father's construction company, the Saudi Binladin Group, took substantial part in the endeavour, according to the newspaper.

The article noted that the complex consisted of "miles of tunnels, bunkers and base camps, dug deeply into the steep rock walls". The fortress was later used by Bin Laden and then by Daesh (ISIS/ISIL)*. In 2017 the Nangarhar cave complex was struck by the GBU-43/B Massive Ordnance Air Blast Bomb, commonly known as the "mother of all bombs", on orders from US President Donald Trump.

© AFP 2020
Afghan mujahideen prepare a rocket attack on the government troops in Shaga, Eastern Nangarhar province, on January 15, 1989 during the Afghan Civil War opposing the Islamic Unity of Afghanistan Mujahideen and the Democratic Republic of Afghanistan (DRA) supported by Soviet Union

'US Opened the Way to Islamic Radicalisation, Birth of Al-Qaeda*'

Speaking to Radio Sputnik, Dr Ayesha Siddiqa, a Pakistani civilian military observer, geo-strategist and political analyst, drew parallels between the Soviet campaign and the US war in Afghanistan.

"Pakistan's ISI [Inter-Services Intelligence agency] which is military intelligence and the CIA had presented the idea to the general public that the Soviet Union had invaded Afghanistan with the intention to further invading Pakistan to reach warm waters, and people have realised that this was much of a lie", Siddiqa said.

© Sputnik / V. Kiselev
Russia Bewildered at Afghanistan Expecting Apologies for Soviet Campaign
According to the professor, several decades later Washington fell into the very same trap. "The US is as stuck in the war as the Soviet Union was", she emphasised, stressing that the Taliban forces came out of the first generation of Mujahideen who fought against the USSR and its allied government in Kabul.

For his part, Rahimullah Yusufzai, a political and security analyst and expert on the Taliban*, opined that the Soviet campaign was not as bloody as the one led by the US: "There are more civilian casualties due to the US invasion", he underscored.

Imtiaz Gul, the executive director of the Pakistani Centre for Research and Security Studies (CRSS), noted that the US "opened the way to Islamic militants here, radicalisation within the Islamic societies because they primarily used Islamic or the religious [leverage] to motivate fighters against the Soviet Union and Afghan [government] forces".

According to him, "this was basically the beginning of the radical Islamist militancy, which also then [gave] birth to organisations like al-Qaeda*".

Dr Waheed Uddin, a professor, consultant, and former UN expert, echoed Gul by stressing that "Islamic resistance in all communist and socialist countries was played out and supported by the EU and America as a part of the Cold War strategy".

"American policy was very clear during the Reagan era after the 1980's backdoor intervention through the mujahideen and construction expert Osama Bin Laden to oust the Soviets. Later on, it seems that the following Democrat leaders in America lost interest in this region", the professor highlighted, adding that it resulted in prolonged turmoil between the country's local factions.

Today, after Washington's 17-year long military campaign in the country, the situation on the ground requires "a negotiated agreement among all political factions in Afghanistan and with neighbours that [the] United Nations failed to do".

"Finally, it is time to bring major forces and military assets back to America", Dr Uddin underscored.

© AP Photo / APTV
US Senate Overwhelmingly Passes Amendment Opposing Plans to Exit Syria, Afghanistan
On 14 April 1988, Afghanistan, Pakistan, the USSR, and the United States inked agreements on the Settlement of the Situation Relating to Afghanistan under the United Nations' supervision that led to the Soviet pull-out from the Central Asian state in February 1989.

Soviet casualties included 13,833 killed and 49,985 injured. Additionally, 572 state security service personnel, 28 officers of the USSR Interior Ministry, as well as 190 military advisers, including 145 officers, were killed during the Soviet-Afghan war.

After the Soviet withdrawal, the civil war in the Central Asian country continued as the Mujahideen groups that had not signed the UN accords went on fighting against then Afghan President Mohammad Najibullah. After the fall of the Najibullah government in 1992, the Taliban's Islamic Emirate of Afghanistan emerged in 1994.

In February 1989, the CIA chief in Islamabad cabled the laconic message "We won", as CIA veteran Bruce Reidel recalled in his book What We Won: America's Secret War in Afghanistan, 1979-1989.

© AFP 2020 / Bay Ismoyo
Inspector General: US Needs Programs to Counter Opium Trade That 'Actually Work'
However, the rise of the Taliban and al-Qaeda, as well as the 9/11 terror attack prompted the US to invade Afghanistan in 2001. The intervention has turned into a 17-year long war. The American occupation of Afghanistan has failed to upend the Taliban movement that still maintains control over a substantial part of the country's territory. Besides, the production of opium has dramatically risen during the US' Afghan operation.

According to The Guardian, the cultivation of opium on the Afghan-Pakistani border started to soar in the 1980s, growing from 100 tonnes annually in the 1970s to 2,000 tonnes a year by 1991. In 2000, the Taliban government banned opium crops; however, following the US invasion the UN's 2007 Afghanistan Opium Survey found that about 8,200 tonnes of opium was being grown in the country "providing 93 percent of the world's illicit heroin supply". In 2018, the body reported that opium cultivation in country had continued to soar, increasing from 201,000 hectares in 2016 to an estimated 328,000 hectares in 2017.

The Afghan operation has come at a price for Washington. According to the Watson Institute of International and Public Affairs at Brown University, the US military actions in Afghanistan, Iraq, Syria, and Pakistan have cost the US $5.9 trillion since they began in 2001, with the Afghan campaign remaining the longest and most expensive military endeavour.

However, it remains unclear whether the Trump administration will bring an end to the 17-year long conflict, with Congress urging the American president to maintain the US presence in the region once dubbed the "Graveyard of Empires".