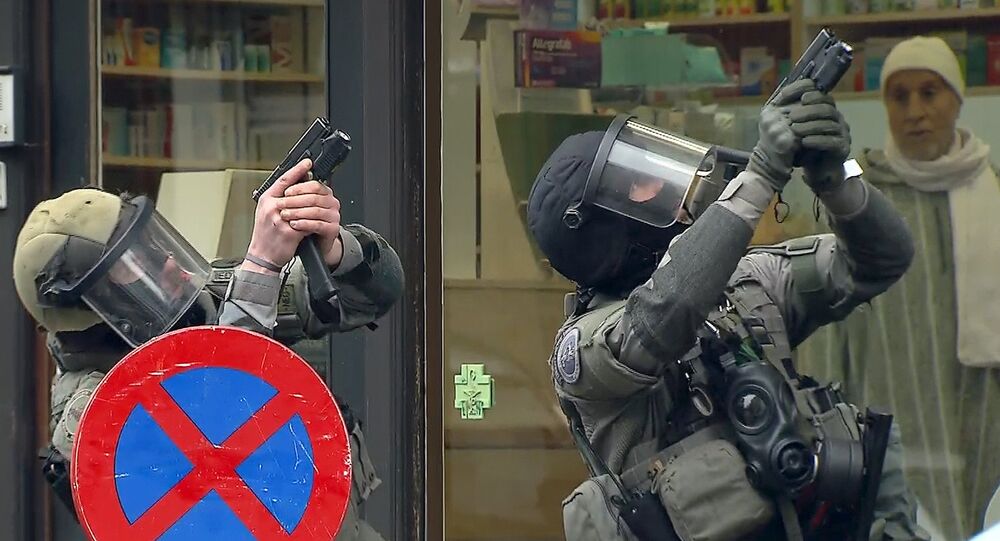 Voices have been increasingly raised in Belgium against Saudi Arabia and the spreading of Wahhabi and Salafist ideology in Europe, French journalist and founder of Agora Erasmus political organization Karel Vereycken told Sputnik, commenting on the recent Islamists' terror attacks in Brussels.

Commenting on the deadly Brussels assaults the International Centre for the Study of Radicalization (ICSR) underscored that "compared to other Western countries, Belgium is particularly vulnerable to jihadist terrorism."

"First, the country has an especially longstanding and well-organized network of radical Islamist recruiters. Second, its police and intelligence agencies lack the resources to counter the surge in jihadist recruiting over the last five years," the ICSR reported Thursday, adding that "an estimated 500 Belgian nationals have travelled to Syria or Iraq with the intention of joining militant groups."

In general, the country has Europe's highest known per capita participation rate in Islamist groups, like Daesh and al-Qaeda.

"Increasingly, voices have been raised against Saudi Arabia and the spreading of Wahhabi fundamentalism through the Saudi-run Great mosque of Brussels and the Centre Islamique de Belgique (CIB) of Molenbeek, where many young criminals were recruited for making the trip to Syria," French journalist and founder of Agora Erasmus, the Belgian LaRouche movement, Karel Vereycken told Sputnik.

How Did It All Begin?

According to Leo Cendrowicz of The Independent, the story begins with the "implanting" of Saudi Salafist preachers in Belgium since the 1960s.

"Keen to secure oil contracts, Belgium's King Baudouin made an offer to Saudi King Faisal, who had visited Brussels in 1967: Belgium would set up a mosque in the capital, and hire Gulf-trained clerics," Cendrowicz narrated.

© REUTERS / Francois Lenoir
Daesh's Rampage is More 'an American Failure Than a European One'
In 1978 the Saudis opened the Great Mosque of Brussels, as well as the Islamic and Cultural Centre of Belgium (ICC).

However, the devil is always in details. Saudi Arabia's Wahhabi version of Islam differs from other Islamic teachings because of its intolerance and radicalism in the first place. The House of Saud's sectarian vision has been championed by Riyadh throughout the world for decades, becoming a sort of "soft power" weapon.

Wahhabis' "fraternal" organization is the Muslim Brotherhood, which roots go back to the late 1920s, when the Brotherhood was founded by Sheikh Hassan al-Banna in Egypt. Expelled from Egypt in the 1960s, the Muslim Brothers found a shelter in Saudi Arabia. Sayyid Qutb, the Brotherhood's leading member, was dubbed the father of modern Islamic fundamentalism, and had had an ideological influence on Osama bin Laden. Ayman al-Zawahiri, the current leader of al-Qaeda, is also a former Muslim Brotherhood member.

© Photo : Youtube/Mehin
Al-Banna (third from left) with Aziz Ali al-Misri (fourth from right) and Egyptian, Palestinian and Algerian political and religious figures at a reception in Cairo, 1947.
© Sputnik / Valeriy Melnikov
Untold Story of Syrian Coup: Who is Really Behind the Plot to Topple Assad?
Back in 2008 the NEFA Foundation — a US-based nonprofit entity engaged in terrorism research and analysis — reported that "Belgium has become an important center for the global Muslim Brotherhood in Europe" and provided a retrospective of the organization's development.

While the first Brotherhood's mosque was founded in Munich, Germany back in 1960, the activities of the International Muslim Brotherhood in Belgium has been tracked by the country's intelligence service since 1982. Citing a 2002 report of the Intelligence Committee of the Belgian Parliament, NEFA revealed that over the decades the Brotherhood formed a network of clandestine organizations, usually focusing on young second and third generation Muslim immigrants.

Brussels serves as the national office of the Federation of Islamic Organizations in Europe (FIOE), the global Muslim Brotherhood's umbrella group in Europe.

What Lies at the Root of Terror Upsurge?

© AFP 2020 / YOUSSEF KARWASHAN
RT Exclusive Documentary: Film Crew Discovers Financial Receipts for Turkey-Daesh Oil Trade
Discussing the problem of Islamic extremism in the EU, some experts usually refer to the ongoing refugee crisis, deplorable conditions many Muslim immigrant descendants live in, and their inability to assimilate into European society. Some go even so far as to claim that Islam itself bears the seeds of radicalism. However, these explanations do not give us a comprehensive answer on what actually is going on.

Fanatical Salafist Jihadism has nothing to do with the teaching of Islam, just like Medieval Western Crusaders' ideology had nothing in common with the teaching of Jesus Christ, as American researcher and author F. William Engdahl noted in his latest book  The Lost Hegemon: Whom the Gods Would Destroy.

Poverty and socialization problems may lead to sporadic hooliganism, but Europe is facing a threat posed by a network of well-armed and trained domestic Islamist militants.

In his interview with Sputnik, Vereycken underscored that the EU and German Chancellor Angela Merkel are still turning a blind eye to the problem. They are courting Turkish President Recep Erdogan who is famous for his clandestine collaboration with Islamists and who "himself is a member of the Muslim Brotherhood."

"While keeping open the borders for Daesh and buying their oil, Erdogan is now posturing as a great enemy of terrorism and lecturing Belgium how to behave while the blood of our citizens is not yet cold," Vereycken noted.

Agora Erasmus' founder stressed that the Belgian government and European leadership should take certain measures to mitigate and eliminate the terror threat.

"First of all, the decades long, evil role of Saudi Arabia and Qatar, in spreading the Wahhabite and Salafist ideologies and the financing of terrorist organizations, on which the Belgian, as well as the US, the British, and the French governments, have closed eyes" should be unveiled and "uprooted," the Agora Erasmus official statement reads.

© AFP 2020 / Noorullah Shirzada
'Agents of Destruction': How CIA Helped Create Islamist Frankenstein
"Then, there is the complicity of Daesh with Turkey, a member state of NATO whose headquarters are eight kilometers from the attacks. While Erdogan and his family buys Daesh's oil and provides them with weapons and equipment, the EU submits itself to Turkeys wishes by exchanging refugees and offering him billions of euros," the statement continues.

"Finally, there is the financing of terrorism, which would be impossible without the banking facilities of the fiscal safe heavens offered by the City of London and Wall Street, as documented in a US Senate report in the case of British bank HSBC. In Belgium, an investigative parliamentary commission on the financing sources of terrorism, if allowed to do their job, would quickly arrive at the conclusion that an orderly banking reorganization, through a banking separation law based on the Glass-Steagall Act, would be an excellent weapon in the war on terrorism," it emphasizes.

In its statement Agora Erasmus also nails NATO for its secret wars which contributed to the emergence radical Islamism and the chaos of the ongoing refugee crisis.

"So the policies that were promoted by our leaders yesterday, willfully or by our submission, are now backfiring <…> and hitting us with full force in the face," Karel Vereycken underscored.