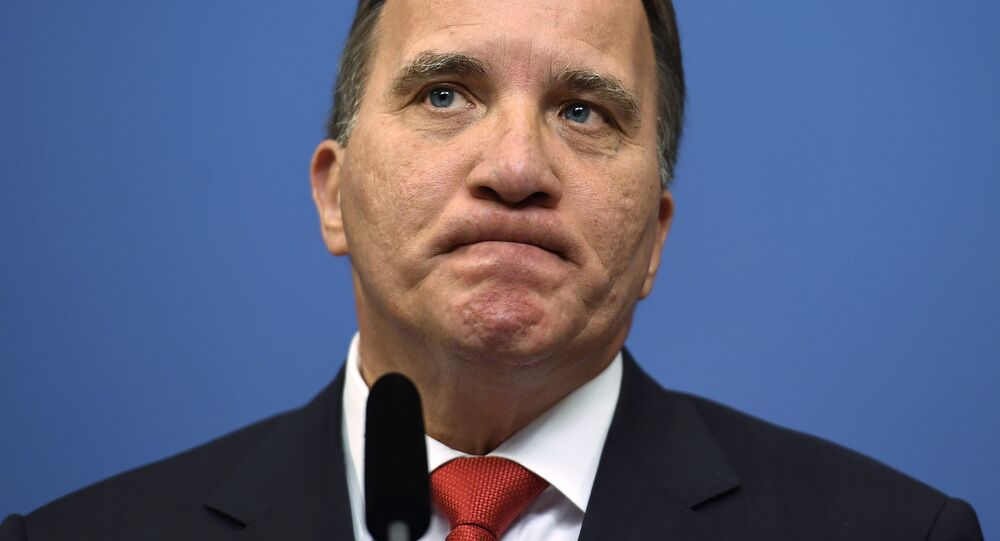 Sweden's embattled Prime Minister Stefan Löfven has been given a vote of no confidence in a recent opinion poll for, among others, pinning the crime wave on segregation and social injustice.

Swedish Prime Minister Stefan Löfven has landed in hot water over a series of interviews in which he consistently denied any link between immigration and the problems many believe it has entailed, such as a wave of violent crime that swept Sweden's migrant-heavy suburbs.

In an interview with national broadcaster SVT, Löfven said that the explosion of gang violence was impossible to predict and that the suburbs would have experienced the same problems anyway. Instead, he pinned the criminal wave on “segregation” and “social injustice”.

In a subsequent interview with Dagens Nyheter, one of the nation's leading dailies, the embattled prime minister, who has seen the support of his Social Democrats party drop to record lows, defended his stance, insisting that the main problem was segregation.

“It is impossible to ethnify crime and say that it depends on being born in a certain place or having a specific skin colour or background”, Löfven said, blaming crime on adverse socio-economic conditions, such as deficient language education and slim chances of entering the labour market, which, in turn, lead to segregation.

© AP Photo / Mikkel Berg Pedesen/POLFOTO
One Fourth of People Named 'Ali' in Sweden Have a Criminal Record – Report
Despite the fact that Sweden has refrained from mapping criminals' ethnicity since 2005 due to ethic considerations, independent reports have pointed out migrants' over-representation in a number of crimes, including rape.

In late 2017, an independent report suggested that migrants, who by conservative estimates from Statistics Sweden constitute about a fourth of the country's population, were severely overrepresented in crimes of a sexual nature, accounting for over 90 percent of rapes and gang rapes.

While Löfven specifically ran on a platform of weeding out crime and claims to have pursued this goal from day one, his failure to curb rampaging violence, such as gang shootouts and explosions, may spell his downfall.

A survey performed by pollster Sifo on behalf of the newspaper Expressen has indicated that voters have low confidence in Löfven's ability to tackle gang violence and organised crime, which were identified among the most burning issues facing Sweden.

A total of 66 percent said Löfven has done a poor job in dealing with crime, as opposed to 25 percent who had a favourable view. Furthermore, only 53 percent of his own Social Democrat voters have confidence in the way he handles gang violence. According to the survey, voters saw right-wing Sweden Democrat leader Jimmie Åkesson, Löfven's nemesis, as best-suited to handle questions about law and order in Sweden.

“Stefan Löfven has been clearly rejected by the population at large. There is a consistently high mistrust, both among men and women and in different age groups”, Toivo Sjörén of Sifo told Expressen.

This attitude is reflected in the massive criticism of Löfven's take on crime, including by his allies.

Even the newspaper Aftonbladet, which identifies as “independently Social Democrat”, slammed his interview, calling it a “catastrophe”. Commentator Lena Mellin called Löfven “ill-prepared” and “lost for answers”, citing his failure to explain why Sweden digresses greatly from comparable countries and tops the statistics of young men's deaths.

Widar Andersson, editor-in-chief of Folkbladet, a fellow Social Democratic newspaper, attacked the prime minister: “If Stefan Löfven and the government wish to maintain some form of authority, a straightforward and sensible language is needed in this field”.

Löfven's opponents were even less sparing.

“Löfven claims to have worked 'since day one' to crack down on crime. Maybe time to let someone else give it a try, based on the result?” Johan Forsell of the liberal-conservative Moderate Party tweeted.

​“Still nice that we have a prime minister who is utterly rubbish at lying”, fellow Moderate Hanif Bali sneered.

​A fresh opinion poll showed that the Sweden Democrats have become Sweden's most popular party for the first time, edging out Löfven's Social Democrats, who slid to just 22.2 percent after having their worst electoral performance in a century at barely 28 percent of the vote in 2018.

By pioneering historic concepts such as the “welfare state” and “the home of the people”, the Social Democrats governed Sweden for most of the 20th century, producing a plethora of prime ministers, including Per Albin Hansson, Tage Erlander, and Olof Palme.