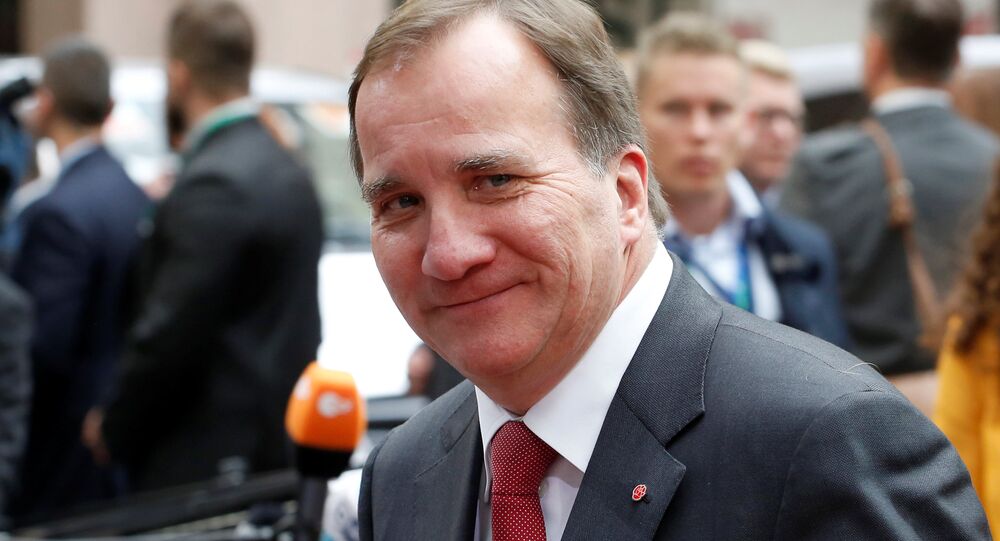 Although the results of Sweden's ruling party the Social Democrats recent crusade against crime fronted by Prime Minister Stefan Löfven are yet to be seen, the campaign itself has been mercilessly mocked on Twitter.

The Social Democrats proclaimed the start of a campaign for a safer Sweden on Twitter on Wednesday afternoon.

"Burglaries and thefts are on the rise in Sweden, not least in rural areas. International gangs are often behind the crimes. Sweden should be a safe country, and ordinary people's homes and possessions should be left alone. That's why we are taking up crime-fighting in earnest," the Social Democrats wrote in a poignant tweet.

​Under the text there is a picture of Prime Minister Stefan Löfven with his arms crossed and with the caption "We will put an end to thieving gangs" over his chest.

© CC0 / Peter Isotalo /
Easy Pickings: Sweden Becomes 'Smorgasbord for International Crime'
International gangs' overrepresentation in burglaries and theft has been widely discussed in recent weeks. Earlier this year, the police intelligence unit compiled a report according to which international mobs account for nearly half of the burglaries committed in Sweden.

The recent policy endorsed by the Social Democrats themselves was to at all costs avoid stressing the nationality of criminals, whilethose doing otherwise, such as stressing migrants' overrepresentation in gangland crime and rape, often being stamped as racist or xenophobic by Sweden's mainstream media. Now, the Social Democrats' are clearly contradicting their own practice less than a year before parliamentary elections and this has raised many eyebrows in Sweden.

The public's reaction to the Social Democrats' campaign was thus largely negative, airing mockery or mistrust in general.

"This must be a joke account, right?" a user wondered.

"You mean that production of 'stop stealing' bracelets will be stepped up?" another asked sarcastically, alluding to the police's painfully unsuccessful campaign to stop sexual assaults at summer festivals with bracelets with "don't paw me" inscriptions. Not only did they fail to produce any palpable result, but they also reportedly ended up being worn by the assailants themselves.

"I'm also very interested. As a police officer, unfortunately, I have not noticed anything yet. On the contrary, we are having it harder than ever before," a third user wrote.

Yet another user posted a photo-shopped portrait of Löfven with the caption "It's we who have invited the thieving gangs here," referring to the Social Democrats' lenient asylum policy.

"As you are powerless to stop the policemen from leaving the force in droves, who do you think will do all the crime-fighting?" Roger Haddad tweeted.

"But please, you are at least five years too late! Is it the sluggishness of the system or the processing time the reason for this late awakening?" Tommy Linnér of the Center Party wondered.