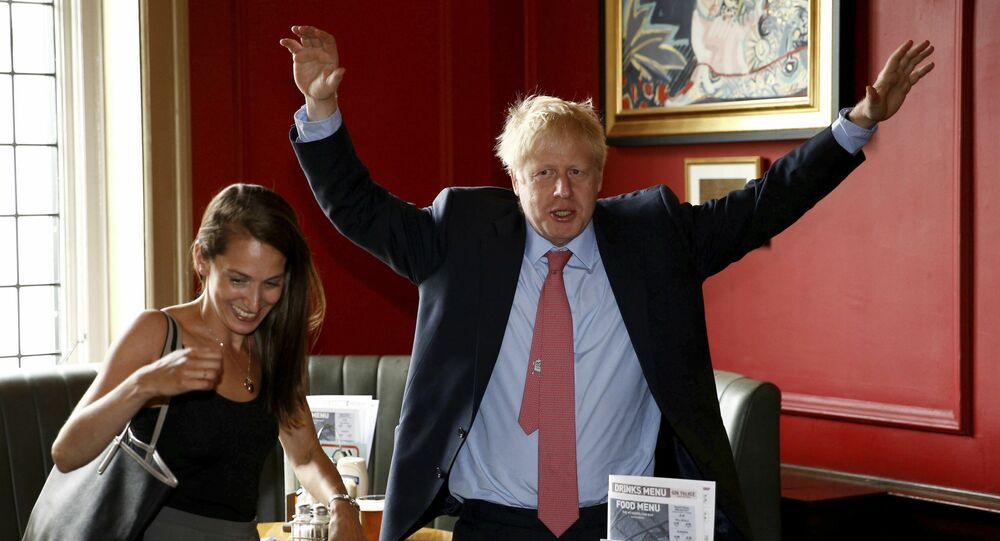 Johnson’s remarks come a few days after US President Donald Trump hit out at outgoing British Prime Minister Theresa May, describing her as “foolish” and claiming that her Brexit blueprint had been a disaster because she turned a blind eye to his advice.

UK prime ministerial hopeful Boris Johnson has admitted in an exclusive interview with Politico that he “can’t dissent” from US President Donald Trump’s s stern remarks about Theresa May's handling of Brexit.

“When it comes to the context of what the [US] president has said about the Brexit deal, I find it hard to disagree”, he pointed out.

“Probably, from the point of view of those of us who want to get Brexit done and make a great success of it, it would be fair to say this is a debate that’s best conducted within the U.K. But you know — the president has his style and his approach”, Johnson added.

When asked whether it is relevant for a foreign leader to lambast the UK Prime Minister in such a rude way, Johnson said, “I don’t want anybody else telling us what to do. Or anybody else criticizing our government, I suppose is my feeling”.

“But if you ask me whether I think the Brexit negotiations have been brilliantly handled, I don’t think so”, he underscored.

His comments came after Trump took to Twitter to point the finger at Theresa May in light of a recent political scandal around leaked memos by UK Ambassador to the US Kim Darroch, in which he specifically called the US President “inept” and “incompetent”.

“I told Theresa May how to do that [Brexit] deal, but she went her own foolish way - was unable to get it done. A disaster!” Trump tweeted on Tuesday.

He earlier accused May of deciding “to go another way” in handling Brexit, something that Trump claimed had finally led to a “mess”.

In a separate development, Junior Foreign Office minister Alan Duncan lashed out at Johnson for his failing to support Darroch, who has already resigned due to the memos, in his spat with Trump.

“He has basically thrown this fantastic diplomat under the bus to serve his own personal interests. His disregard for Sir Kim Darroch and his refusal to back him was in my view pretty contemptible, but also not in the interests of the country”, Duncan told the BBC, referring to Johnson’s appearance on a live ITV debate.

Johnson, in turn, rejected Duncan’s accusations as “bizzare”, stressing that he is a “great supporter of Kim's” and that he “worked very well with him for years”.

Published in the British tabloid Daily Mail and confirmed by London, the leak suggested that Darroch branded the Trump administration "dysfunctional, unpredictable [and] diplomatically clumsy".

Following the leak, Trump tweeted that the White House is not "thrilled with a very stupid guy" appointed as the UK ambassador, adding that Washington would no longer be communicating with Darroch.