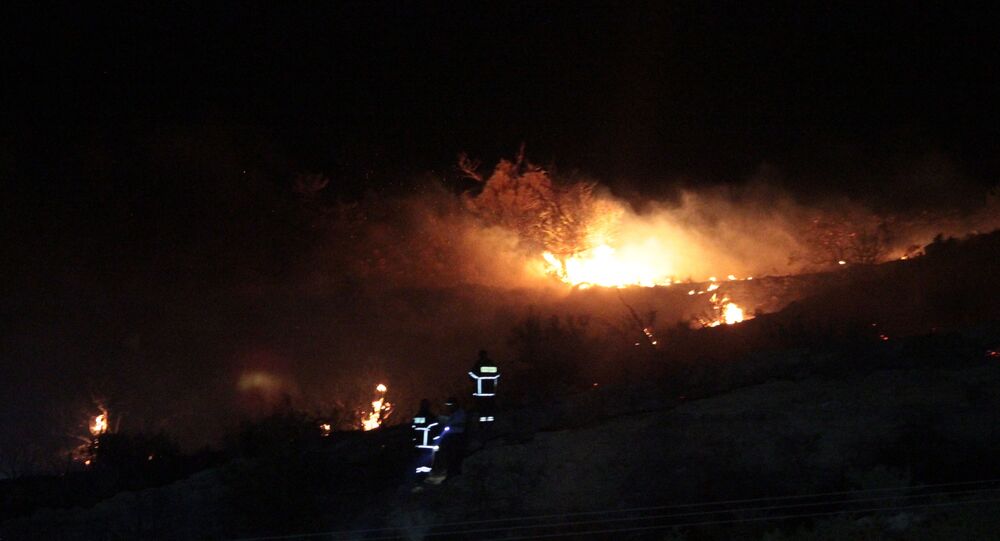 An unknown object, alleged to be an errant missile, exploded in the air before it crashed on the Mediterranean island earlier in the day, according to an official from the self-proclaimed Turkish Republic of Northern Cyprus.

A video has emerged on social media allegedly showing the explosion, which occurred in northern Cyprus after an object, believed to be a missile, fell on the island at around 1 a.m. (22:00 GMT) in the region of Tashkent, north of the Cypriot capital of Nicosia.

In the footage, posted on Facebook, people are seen watching the blaze ravaging the crash site and the smoke rising above the mountainside.

Kudret Ozersay, foreign minister of the Turkish Republic of Cyprus (TRNC), recognised only by Turkey as an independent state, alleges that the blast occurred before impact, which started the fire and was heard for miles around, since there were no craters, and debris was found at several locations.

The official earlier said that authorities were studying debris from the object that is now alleged to be a "Russian-made missile", presumably an S-200, "which was activated last night in the face of air strike against Syria".

He assumed writing on the retrieved debris was identical to that found on pieces of a Russian-made S-200 missile that crashed in Gaziantep, Turkey, in July 2018.

Both the Russian and the Syrian Defence Ministries have yet to comment on the claims.

Ozersay was referring to an overnight air strike purportedly conducted by Israel on Syria's Damascus and Homs, with the Syrian Air Defences repelling some of the missiles.

While Tel Aviv hasn't replied to the allegations yet, SANA cited a Syrian military source as saying that the strikes had been launched by Israeli military aircraft from Lebanese airspace.