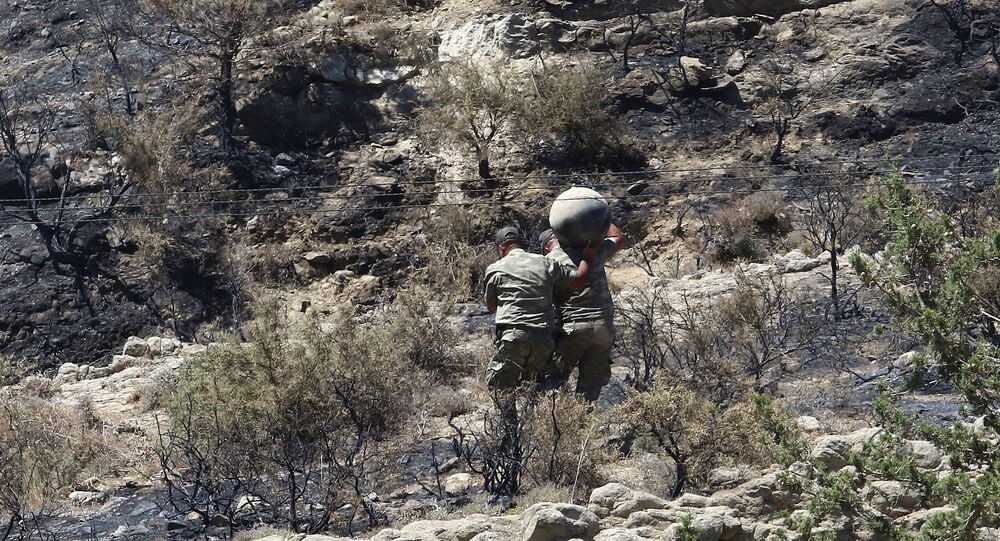 An official from the Turkish Republic of Northern Cyprus (TRNC), which is recognised only by Turkey, said earlier on Monday that authorities were studying debris from an unidentified flying object that may have been a missile that crashed north of Nicosia.

An object that hit northern Cyprus on Sunday night is allegedly a "Russian-made" air defence missile, Kudret Ozersay, foreign minister of the self-proclaimed Turkish Republic of Northern Cypus, wrote on Facebook on Monday.

"The first assessment is that a Russian-made missile, part of the air defence system, which was activated last night in the face of an air strike against Syria", he wrote.

He alleged that the projectile could be "a Russian-made S-200 air defence" missile, which supposedly "completed its range" and fell on the Mediterranean island after hitting its target during a purported Israeli raid on Syria.

"The pieces that fell to several different points prove that the missile exploded in the air before it crashed", he said.

Ozersay assumed marking on the retrieved debris matched that found on pieces of a Russian-made S-200 missile that crashed in Gaziantep, Turkey, in July 2018.

While the official added that he will continue to inform the public about the incident, neither the Russian, nor the Syrian Defence Ministries have commented on the allegations yet.

It was earlier reported that an explosion occurred around 1 a.m. (22:00 GMT) in the region of Tashkent, north of Cyprus' capital, Nicosia, causing no casualties.

"Initial findings indicate the object that caused the explosion was either an aircraft carrying explosives or a direct explosive (missile). The writings and signs on the debris will allow us to understand exactly what happened soon", Ozersay said.

Cyprus has been partitioned since 1974, when Turkey occupied the island's northern part, later proclaiming the region the Turkish Republic of Northern Cyprus (TRNC), which is only recognised by Ankara as an independent state. The Republic of Cyprus is internationally recognised as the sole legitimate state.

In his comments Ozersay made a reference to overnight missile strikes in the vicinity of Syria's Damascus and Homs, which, according to the Syrian side, had been carried out by Israel. Tel Aviv has yet to comment on the claims.

"The Syrian Air Defence Force repelled the attack of missiles launched by Israeli military aircraft from Lebanese airspace in the direction of our military positions in Homs and near Damascus", SANA cited a Syrian military source as saying.

According to local media, four people were killed in the attack, while 21 more were wounded. Lebanese TV-channel Al-Mayadeen, meanwhile, reported that blasts also heard on the Syria-Lebanon border, coincided in time with Israeli aviation's low-altitude flights in the south of Lebanon.

Israel previously admitted to conducting hundreds of air strikes against Syria in the past few years, saying that the raids were aimed at countering an alleged Iranian military presence in the country. While Damascus has strongly condemned the strikes as a violation of its sovereignty, Tehran has repeatedly stressed that its presence in the war-ravaged country has only been limited to sending advisers to help fight terrorism.